A musical composed by Stephen Flaherty, lyrics by Lynn Ahrens, book by Joseph Dougherty based on the screenplay by Norman Steinberg and Dennis Palumbo 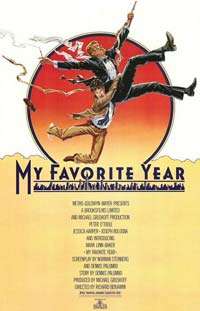 In 1982 Peter O’Toole appeared in “My Favorite Year”, the first film to be directed by actor Richard Benjamin. O’Toole played a washed-up Hollywood star booked to appear as a guest on a US television comedy programme. The part was loosely based on the swashbuckling Errol Flynn, known for his unquenchable taste for women and liquor, and the said television programme was something akin to “Your Show of Shows” which in the 1950s featured Sid Caesar and employed such writers as Woody Allen, Neil Simon, Mel Brooks and his colleague Carl Reiner. Mel Brooks produced the film. Later Neil Simon wrote a play about his time as a TV-comedy-writer called “Laughter on the 23rd Floor”.

The story of “My favourite year” is told through the eyes of Benjy Stone (no relation to Benjamin Stone in Sondheim’s “Follies”), a young scriptwriter working on the show. He recalls the best year of his life, 1954, when he had to take care of the unpredictable Alan Swann and make sure he got to the TV studio on time, in one piece and sober. It was a very funny film with O’Toole giving a delightfully carefree performance as Swann, for which he was nominated for an Oscar.

Something, however, has happened to the humour in the adaptation of the piece as a musical comedy. There are a number of funny moments but it’s just that there don’t seem to be enough of them. On film, obviously, more could be made of Swann’s over-the-top swashbuckling lifestyle, but on stage Swann isn’t even the main character of the piece. Writer of the stage book, Joseph Dougherty, loses some of the more farcical elements from the film, which warranted great belly laughs for the antics of O’Toole and company. Nevertheless composer Stephen Flaherty and lyricist Lynn Ahrens (who were also responsible for the musical “Ragtime”) have here written a tuneful, sub-Sondheimian collection of songs that keep things ticking over nicely.

When it opened in 1992, the musical of “My Favorite Year” was not a great success. Even with Tim Curry playing Swann it lasted only 37 performances at Lincoln Center in New York. Last year the authors took another look at the piece and in April this year two new songs were introduced into a production in Chicago. Another song, ‘Pop! Fizz! Happy!’ cut from the show at the Lincoln Center previews, was reinstated for the 1994 production at the Guildhall School, its UK premiere. And now it’s back again at Guildhall School with the same director, Martin Connor, who always has impeccable taste in these matters and is a champion of rarely-performed musicals. But the show still awaits its UK professional premiere.

It’s a good piece for a student cast, as it has over twenty different characters. It’s a lightweight show with plenty of dancing and, rather like Martin Connor’s other recent production, “Babes in Arms”, which has just closed at Chichester, it has that feel-good factor that a musical comedy needs. It’s a pleasure just watching these young star-performers-of-tomorrow enjoying themselves. The best numbers are the big production jobs such as the opening chorus of ‘Twenty million people’ about the rise of television, the ‘Pop! Fizz! Happy!’ number that opens Act Two, the title number, and ‘If the world were like the movies” in which Swann sings with some regret at the end of Act One: “If the world were like the movies / We would never make mistakes / We’d correct our little blunders and select our better takes.” How true!

There are some stars in the making here, with Jonathan Christie as Benjy demonstrating a skill for a good comic line, and Maria Bonner as his would-be girlfriend ‘K C’ playing hard to get with some good comic edge. Thomas Howes shows what a very good singing voice he has: a rich and strongly delivered vocal performance. He has mellifluous speaking tones reminiscent of Ian McKellen and Dirk Bogarde. Elsewhere Anna Skellern is excellent in the wisecracking, Eve Arden-style role of Alice Miller, and Claire Brown muscles in as Belle, Benjy’s loud-mouthed mother in a performance that apparently owes its inspiration from the late, great Ethel Merman. Incidentally, Lainie Kazan played this role in both the film and the original New York production.

Andy Massey’s orchestral forces play the attractive score with panache and, all in all, this is a delicious confection that may be short on belly laughs but is, nonetheless, hugely enjoyable.