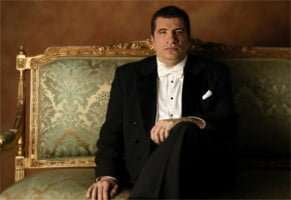 Carnegie Hall’s “Spring for Music” series concluded with a most adventurous concert by the Nashville Symphony and its Costa Rican-born music director, Giancarlo Guerrero. He stated during a brief pre-concert introduction that the orchestra prides itself on its contribution to American music that explores new paths. This program focused on three challenging large-scale works by Charles Ives, Terry Riley and Percy Grainger. (Grainger, Australian by birth and a resident of London in his early years, emigrated to the US in his thirties.)

Larry Austin’s realization and completion of Ives’s monumental Universe Symphony opened the concert. Beginning in 1911 Ives worked on what would have been his fifth symphony. When he knew that he would not live to finish it – he died in 1954 – Ives suggested that there were sufficient materials to enable someone else to do so. In barely comprehensible prose, he described the Universe Symphony as “an attempt … to cast eternal history, the physical universe of all humanity past, present and future, physical and spiritual, [in] a universe of tones.” Austin took up the challenge, knitting together material from various pieces and sketches to achieve a workable whole that provides a reliable account of this gigantic canvas.

The symphony is constructed in three continuous sections: ‘Past (From Chaos, formation of the Waters and Mountains)’, ‘Present (Earth and the Firmament, evolution in Nature and Humanity)’, and ‘Future (Heaven, the rise of all to the Spiritual’). It uses enormous orchestral forces divided into seven ensembles, four of which represent ‘The Heavens’, and the other three ‘The Life Pulse’, ‘The Earth and Rock Formations’ and ‘The Earth Chord’. Five conductors are required, four of them directing different groups from within the orchestra and wearing headphones so that they can distinguish their particular ensembles. A computer placed to the left of the podium allowed Guerrero to maintain control over the multifarious groupings, each playing out of sync with the music that surrounds them. Melodic line is virtually absent during this forty-minute slow-moving work; instead, sonic coloration is imbued with a mystical atmosphere that develops into sections that combine the diverse ensembles to produce overpowering explosions of utter chaos.

Structured in an asymmetrical arch, the work begins quietly in the percussion – twenty players in all – in what seems like a formless and timeless evocation of the vastness of infinite space. Continuous rhythmic figuration on the snare drum provides an underlying sense of agitation to the xylophone’s meandering line. The music here has an aleatoric quality that exudes a mystical aura, punctuated at the beginning of each bar by the stroke of a bell. During what must be one of the longest crescendos in music history, first woodwinds, then strings, and finally brass make their appearances as the breadth of sound becomes overwhelming. A clarinet (placed in the front of the violin section) can be heard struggling but failing to interject a lyrical melody. Brasses rise above the throng with a brief chorale-like passage followed by grayish woodwind sustained chords embellished by marimba. Suddenly the music stops only to explode a moment later, as if to suggest that what has already been chaotic has finally gone mad! Gradually, things quiet down and become less dense until only the bell chimes heard earlier accompany the last soft sounds of the gong. It was a devastating experience. Given its innumerable complexities, Guerrero deserves praise for making it work as well as it did.

The concert’s second half began a 2011 work commissioned by the orchestra from Terry Riley, best known for In C and A Rainbow in Curved Air. The Palmian Chord Ryddle is essentially a concerto for amplified violin and orchestra, written for Nashville-based Tracy Silverman. The work’s cryptic title suggests inspiration by an ancient musical mode, but according to Silverman “the riddle has to do with the way the chord resolves itself over the course of the concerto’s 37-minute duration.” The work begins with Riley’s so-called Palmian chord (D-E-F-F sharp-G sharp-A-B-C) that he uses either as a scale or chordal cluster to generate the initial theme and its harmonies. Written in what the composer refers to as “wave form”, the concerto contains eight sections. Riley integrates quasi-Country Music, played principally by the soloist, with a modern idiom that does not sacrifice tonality but lacks interesting material, consisting too often of rather trite figuration and empty lyricism. Bluesy music infused with modern harmonies in both ‘Slow Drag’ and ‘For Maresa’ and Indian rhythms in ‘Ghandi-Ji’s Danda’ sounded too cosmopolitan to be convincing. Only in the starlight aura of ‘Afterglow’ was any memorable atmosphere created, its ballroom-like character contradicting the work’s countrified focus. The concerto does not contain sufficiently engaging musical material for its length. Silverman seemed completely absorbed by its country-music aspects and the orchestra followed Guerrero through it all with rapt concentration.

Percy Grainger’s The Warriors, which the composer regarded as his finest orchestral work, was commissioned as a ballet score by Sir Thomas Beecham. Its single movement lasts nearly twenty minutes and is divided into eight sections, but as Grainger failed to come up with a scenario, the work was never choreographed. However, Grainger did write of “certain mind-pictures” including “an orgy of war-like dances, processions and merry-makings broken, or accompanied, by amorous interludes … a sort of Valhalla gathering of childishly overbearing and arrogant savage men and women … from ancient Greeks, brazen Amazons, squat Greenland women, resplendent Indians, terrifying Fijians and ingratiating Polynesian cannibals”. The use of a second conductor for the celesta and some percussion instruments during one of the central sections and of an offstage brass band in the following section both seemed to parallel Ives’s experiments. Grainger’s style in this staunch and forceful portrayal of tribal warriors is essentially English, even concluding with a grand Elgarian march. But the score’s harmonic idiom is laced with occasionally acrid dissonances, and its gritty melodic material and boisterous tutti passages, though never savage or brutal, are worlds away from the simple lines and mild-mannered ambiance of Grainger’s arrangements of folksongs. Following the rigors of Ives and Riley the Nashville Symphony was still able to do the Grainger justice, playing with full power, enthusiasm and vitality.