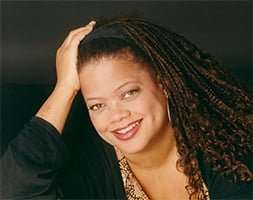 There can be few performers who have such an instant rapport with audiences than Natalie Douglas. With captivating style and bubbly warmth she is presenting a tribute to Nina Simone, demonstrating she need fear no comparisons giving us two songs Simone made her own, a rapturous pairing of ‘Summertime’ and ‘I loves you, Porgy’. Her programme is varied and skilfully assembled to embrace comedy numbers, protest songs, folk music and lush ballads, in style from jazz through rhythm and blues, gospel and soul. Douglas is so endearing that she even persuades the audience to sing-along (on Oscar Brown’s catchy and amusing ‘Forbidden fruit’). Between numbers Douglas gives us stories about Simone.

Born Eunice Kathleen Waymon in 1933, Simone’s first love was classical music (particularly J. S. Bach) but when she first started appearing in night-clubs she changed her name in case her work embarrassed her mother, a ladies’ maid who was also a Methodist minister. She chose Nina (Spanish for ‘little girl’) because that was what her boyfriend called her, and Simone because she had been told she looked like actress Simone Signoret, which had pleased her. Trademark songs included by Douglas includes ‘I put a spell on you’, written by Screamin’ Jay Hawkins, and ‘House of the rising sun’, rendered with heartfelt passion. Thirty years after Simone recorded the Walter Donaldson-Gus Kahn standard, ‘My baby just cares for me’, it was chosen by Chanel No.5 for a commercial, taking her version into the charts.

Douglas does not ignore Simone’s involvement with the civil rights movement, telling of the moment when, while rehearsing for a concert in New York, she and her musicians were told that Martin Luther King had been assassinated. The concert was cancelled, but her bass player, Gene Taylor, was moved to compose a song, ‘Why? (the king of love is dead)’, which Simone performed three days later. Douglas has great energy and obvious joy in performing, and can rouse the audience with revivalist-style foot-tappers, but perhaps best of all, she is a superb singer of ballads, and the highlight of was an incredibly moving account of ‘You can have him (I don’t want him)’, written by Irving Berlin for his musical, Miss Liberty, as two women unconvincingly profess their indifference to the man they both loved. Simone gave the song a startlingly different slant by slowing the tempo and making it a confession of intense devotion. It’s a number Douglas holds much affection for in her matchless rendition. Douglas ends with a rousing performance of the great gospel song, ‘His eye is on the sparrow’, a signature tune of the late Ethel Waters, demonstrating that Natalie Douglas can be compared to her and Simone.