Artists of National Ballet of China 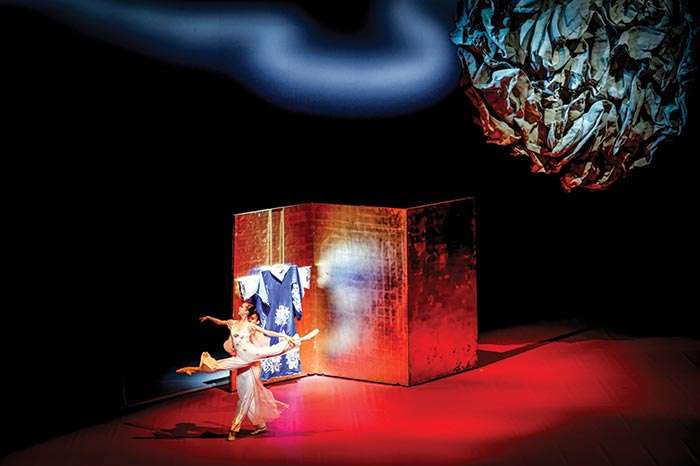 Dame Ninette de Valois (1898-2001), Founder of The Royal Ballet companies, believed strongly that Classical Ballet could only grow out of the particular national traditions of any given country; thus the United Kingdom would have a narrative-flavoured version of the art form, drawing on its own performing heritage. To see de Valois’s theory in practice, one need only watch the National Ballet of China’s The Peony Pavilion, a fusion of Classical dance (pointe shoes, its vocabulary of steps) with Chinese influences (certain poses of the body, the use of hands and, crucially, the inclusion of an Chinese opera singer in the cast). The music is a curious amalgam of Western composers, from Ravel and Debussy to Respighi and Prokofiev, with Chinese sonorities, and Guo Wenjing’s sung/spoken interludes performed by Jia Pengfei.

The ballet is stunningly designed by Michael Simon – a very simple stage picture – a central platform which can be raised or tilted, and monumental objects (a huge peony, bunches of sticks, a massive branch) which descend and hang from the flies. Lighting is superb, creating blocks of colour and light to startling effect, and costumes are rich and imaginative. The lead characters – Du Liniang, her two additional incarnations and Liu Mengmei – are dressed in Chinese-style in bright, single colours, decorated with gold; the corps de ballet changes costume frequently, more Western in shape, certainly for the women whose simple dresses are glorious in cut. All costumes look expensively-made and move beautifully, limbs tracing arcs of movement in fluttering silk. 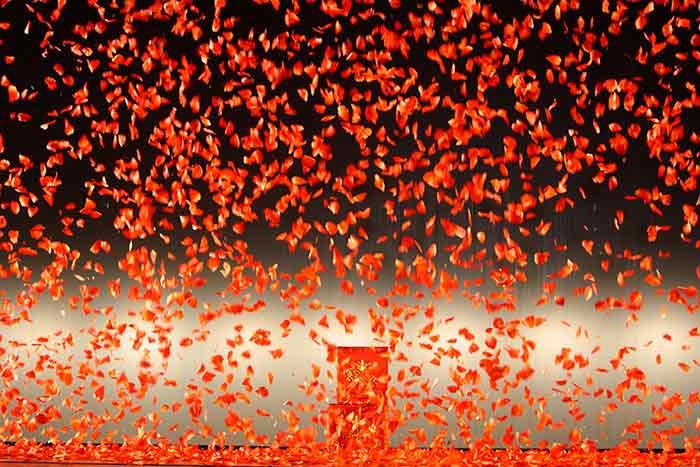 The choreography by Fei Bo (Resident Choreographer) displays a variety of influences, although the mixture never feels uncomfortable – the corps de ballet at times look out of a Balanchine ballet, long limbs raised high, thrust hips, the use of the foot in a stabbing motion, whereas certain crowd scenes are undeniably Chinese, scurrying peasants or gambolling spirits; Martha Graham and her mythological pieces also seem to have an influence. The overall mood and physical delivery of the choreography is measured, decorous even, with movements seeming considered and carefully executed. The story itself is a two-hour distillation of a 20-hour stage story from the 16th century and involves the heroine Du Liniang dreaming of and, finally after many vicissitudes which include being allowed return from the dead, united with her ideal man Liu Mengmei.

Two Acts (six scenes) pass by in not quite follow-able narrative – the tableaux are more evocations, impressions of a story which, were it not for the programme, would be utterly incomprehensible to the viewer. Fei certainly has an eye for effect and, in tandem with his designers, constructs some impressive set pieces – ‘Judgment in Hell’ is a suitably oppressive evocation of the underworld presided over by Li Ke’s fearsome Infernal Judge. The final tableau of the wedding featuring the entire cast in a stately march was visually arresting, a riot of sumptuous red costumes (the colour of marriage), the crashing close of Respighi’s Pines of Rome and a cascade of red peony petals. 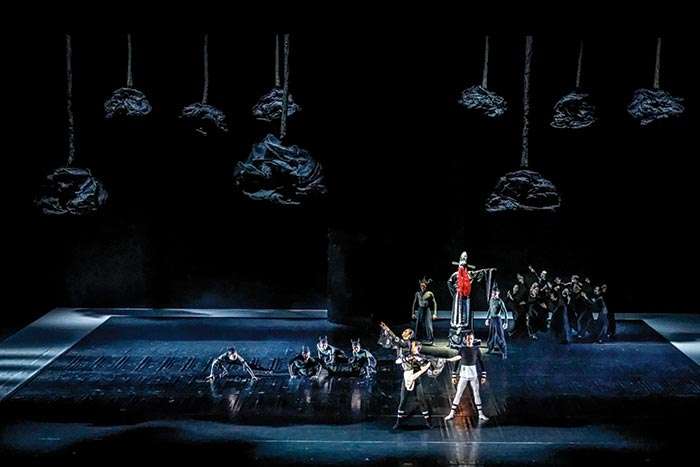 The Chinese dancers impress, not least in the beautifully coordinated corps de ballet and some well characterised named roles. Wang Qimin played the central character with cool mastery, acting as a constant thread through the vagueness of the narrative, easily encompassing the mixture of dance styles used by Fei. Her alter egos were equally impressive; Lu Na made for a Flower Goddess of genuine poise and grace, her balances long and steady, her line pure, while singer Jia Pengfei fascinated with her Peking Opera movements, not least the scurrying footsteps beneath a voluminous costumes which give the appearance of literally gliding around the stage.

The Peony Pavilion is a strange work, recognisable in its form as a ballet, yet unmistakably Chinese in both look and content; satisfying and popular for the company’s national audience, yet approachable enough for those abroad. It is well-judged in its length and judicious in the balance it strikes and thus made a welcome appearance in London and served as a worthy calling card for an interesting company.