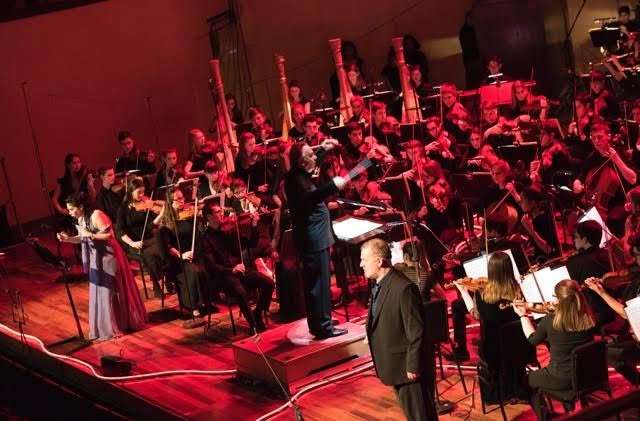 It’s a sobering thought that most of the NYO’s intake of new players were born during this century, and given the doom-laden opinions about the current state of music education in the UK, it’s also an inspiration that these one-hundred-and-sixty teenagers play so well and so responsively. The big event of their winter concerts was their first opera, albeit an hour long, one that defiantly resists being diminished by productions, and one with the two solo roles notably deferring to what is in effect a concerto for orchestra.

First, though, Liadov and Dukas laid on the atmosphere of enchantment with a trowel. The former’s Enchanted Lake is a lovingly crafted piece of Russian impressionism, and Mark Elder drew a satisfying spaciousness of texture and colour from his charges. The strings’ glorious tone wasn’t so full that it couldn’t pare down to watery depth and light, and some imaginative and subtle solos set the woodwind standard high for the rest of the concert. Sir Mark presided over a strongly told, humorous account of Dukas’s Sorcerer’s Apprentice. You could almost see the ‘thinks’ bubble taking shape above the apprentice’s head as he hatches his cunning labour-saving plan, and faultlessly unfolded by the NYO. Perhaps the frenzy was a touch too measured, but the trumpets’ wailing counter-subject as the broomsticks really get down to business was impressively demonic. Ensemble was electrifying, almost ahead of Elder’s baton, and it was a performance that reminded how startlingly original this familiar piece is. 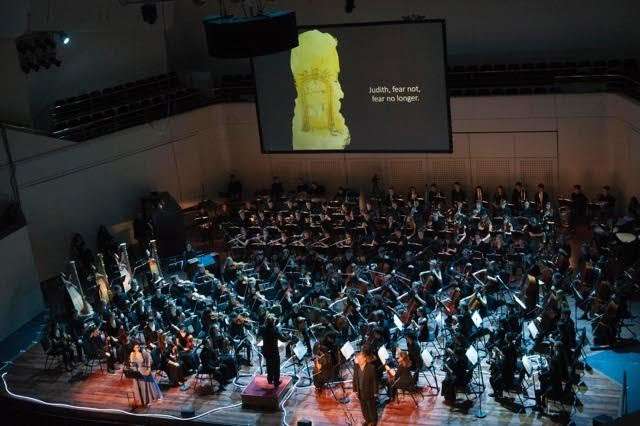 I have yet to see a full staging of Bartók’s Duke Bluebeard’s Castle that has worked – it is as much a hostage to directors as its own conflation of myth and reality. A semi-staging in a concert hall, such as this one from Daisy Evans, can also have a distancing effect. It was far too explicit and fussy for Balász’s and Bartók’s expressionist stream of consciousness about immutable isolation. The two protagonists, Bluebeard’s latest wife and the Duke himself, were corralled into their own spaces defined by those fluorescent coils that mysteriously change colour, and there was much extra-musical involvement from the orchestra (including them all – when not playing – rotating their instruments above their head to denote the treasures behind the third door and switching on what looked like Christmas lights on their music-stands to suggest the sixth door’s lake of tears). The lighting was lurid; four enviably size-zero National Youth Theatre actors (three girls, one boy) delivered a confrontational spoken Prologue, returning as Bluebeard’s previous three wives – I’m not sure how the male actor fitted in here – another of Bluebeard’s secrets, perhaps? – to claim Judith as their own; and the surtitles were accompanied by illustrations, by Chris Riddell, of Bluebeard’s head with a door in it. It was overkill, even if you didn’t know the story. 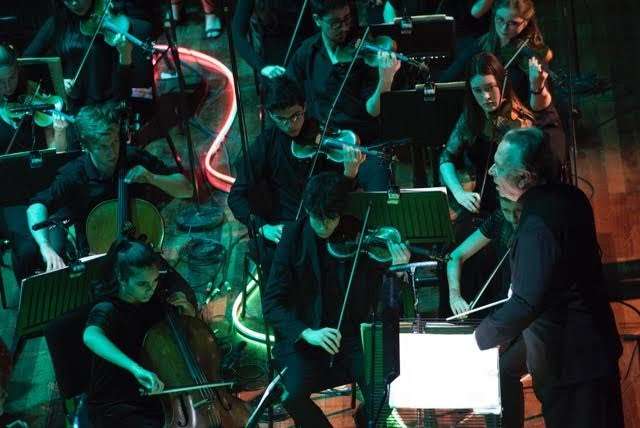 Musically, though, this was a terrific performance. Rinat Shaham (who replaced Claudia Mahnke for the three-venue tour) was by turns febrile, coquettish and terrified, injecting an infectious humanity into the music’s speech-led angular lyricism. Shaham’s lower voice has a special presence, and while she was sometimes drowned by the orchestra, she properly balances the work in her favour until the fifth door. Robert Hayward (unlike Shaham, singing from memory) endowed Blubeard’s music with a Wotan-like dark gravitas, all alpha-male inscrutability and, in the later music, alpha-male ecstasy as he celebrates his previous wives in Bartók’s wonderful outpouring of melody. Dramatically he mostly stands and delivers, which worked very well in contrast to Shaham’s nervy mobility.

The NYO distinguished itself with playing of superb artistry. Again the woodwinds were exceptional, characterising all the solos to complement the singers with great perception; whether seductively soft or overwhelmingly loud, the brass was sumptuous rather than hard; there was a ravishing horn solo in the music for the third door; the percussion added a unique personality, and the strings played with confident eloquence.