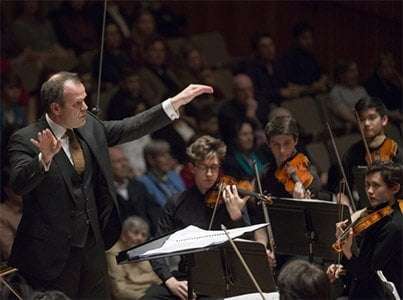 If in terms of the stopwatch this was a ‘short’ concert, with 70 minutes of music (25/45), then quality was put before quantity, the evening proving to be a perfect example of ‘less is more’ (no speeches, no interruptions, the music left to speak for itself). Not that there was any reduction on the platform, for the National Youth Orchestra was typically outsized for this programme of pieces written respectively towards the end of the last century and the one before it.

In François-Xavier Roth, the 150-plus members of the NYO had the ideal guest, a musician of learning and versatility and an inspiring conductor, demanding of high standards achieved through infectious enthusiasm and a ready wit. He certainly had the measure of Asyla (1997). When Simon Rattle conducted the first performance, which was broadcast, Asyla had masterpiece written all over it, and so it has proved over numerous revivals (as recently as December at this venue, with the LPO and Jurowski). Asyla demands an extravagant shopping list of instruments, including an Aladdin’s Cave of percussion and a couple of pianos, one grand, and one detuned upright.

In many respects this NYO account was the most potent of the lot that I have heard, for the well-tutored musicians were totally unfazed by the intricacy of the music and under Roth’s assured guidance gave it an outing that spell-bounded the audience and had your reviewer in flowery observation of the outcome: impressionistic, hallucinatory, mind-bending, momentous, chillingly beautiful… and finding the third movement to be of drug-fuelled incandescence and that the finale, once passed the curious similarity to one of the ‘doors’ in Bartók’s Duke Bluebeard’s Castle (a rippling refrain), reached a climax of cathartic white light before half-remembered motifs and sounds returned and faded to eerie silence. 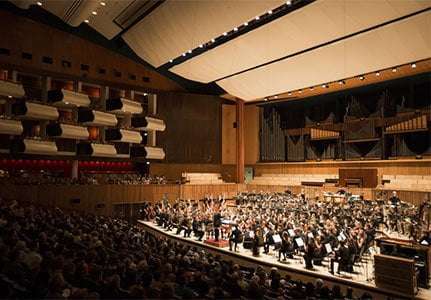 The pluralistic Asyla (“Places of safety … Places of confinement” – Adès) is of industrial power and creepy fragility, with much in between, timbres and flourishes that engage, beats that beguile, and displaying a leaning to the popular (one idea fits Ian Dury’s “Hit Me with Your Rhythm Stick”) that is confounded by the complexity elsewhere. This performance really opened the piece up, and the composer – not always present to hear his music or, even if he is, take applause – was clearly buoyed by the reception and delighted with the youngsters’ relish of his landmark score.

Anyone who knows Roth’s recordings of Richard Strauss’s orchestral music, an ongoing series on the Hänssler label, will perhaps agree that they are something special. If Roth is not to be typecast, he is nevertheless a Strauss conductor of distinction. He swept into Ein Heldenleben (1898) while welcoming applause was dying away – a nice moment of theatre – capturing the swagger of our Hero; and how apposite was the use of antiphonal violins, fanning out gloriously either side of the cellos (centre-left) and violas, about 75 players, add to which 12 left-positioned double basses adding a weighty foundation, entirely the seating arrangement that Strauss knew and exploited. Also notable, with this number of personnel, was that even the loudest passages weren’t pushed into the red levels, Roth skilfully managing an exemplary balance and internal clarity.

After such self-parading exuberance, the Hero (Strauss himself) meets his critics, who here carped deliciously through whingeing woodwinds – unlike your correspondent! – before love was in the air with the appearance of the Hero’s Companion, in reality Pauline de Ahna, represented by a solo violin, played with confidence and seductive expression by Roberto Ruisi. He captured vividly this capricious lady as feisty and coquettish with come-hither eyes … it worked for Strauss, he married her! Following their declaration of mutual affection the very-soft-volume strings had a satisfied glow. From passion to conflict, cued by perfectly distanced trumpets, the Battle was a model of musicality although conflagration was kept a little under wraps, the Hero triumphant of course, so too the NYO horns as his white charger emerges from the carnage.

From War to Peace, a contemplation of past deeds, the self-quotations from Strauss’s work given here with a contented snooze, the various snippets (explicit and interlaced) pointed up with inside knowledge. As Hero and Companion begin to comfort each other in retirement, to one of the composer’s extended golden sunsets, Joel Ashford’s expressive horn-playing reached out to Ruisi’s equally persuasive violin, but not before the strings had coloured and animated one of Strauss’s most soulful passages of yearning with a collective refinement that spoke volumes for the music and the preparation and commitment that had gone into the NYO’s latest course, including concerts in Liverpool and Gateshead before London.