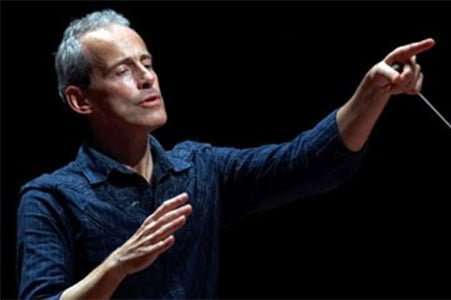 In the programme note for Larry Goves’s The Rules (first heard the night before in Leeds), we were told that the work was to do with breaking the rules as well as following them. “To some extent”, explained Goves, “a composer’s expressiveness is about the extent you break away from the patterns you create.” Each of the work’s five movements bears three different titles: the first is called ‘Transforming patterns/Superposition/Families and cliques’; the second of these, we were told, refers to the study of strata in rock formation.

If such niceties and complexities were apparent to the young musicians, then all well and good, but I doubt whether they were to most of the audience members. Under Paul Daniel’s precise direction we heard music that was for the most part quite easy on the ear, and sometimes intriguing in its sonorities. But anything more than a succession of unconnected, varied episodes was difficult to discern. There was nothing in this composition that we had not heard before in similar essays for a large orchestra. There seemed to be a particular problem of balance, in that for a good deal of the work the strings were seen to be sawing away busily, but could not be heard at all under sustained assault by the huge brass and woodwind sections. The performance received a lukewarm reception. It’s fair enough to suggest that “young people should play young music”, but on this occasion their youthful appetites would have been better satisfied, as a prelude to the Mahler Symphony, by a first half that comprised any of numerous half-hour-long masterpieces of the last century or so.

It was in the Mahler that we heard the exceptional quality of the NYO to better advantage. And maybe it was significant that Paul Daniel had now taken his jacket off to conduct this performance. The playing, as a result of extensive preparation, was entirely secure and settled, but the experience of performing before a large and attentive audience was clearly a special inspiration for the players. Solo contributions were of the highest class, thought I doubted the wisdom of bringing the first horn to the front of the platform for the third movement, even if Mahler himself reportedly did so, important though this part is at this point. The young man responded wonderfully well, but such a spotlight was unnecessary and not helpful to the overall balance of the brass.

Daniel led the NYO with great skill and discernment. His tempos were ideal – the opening funeral march was given time to make a profoundly expressive effect at a slow tread, and the Adagietto (for strings and harp) was, thankfully, moved along tenderly but firmly without any emotional wallowing. All in all it was a most satisfying performance, leaving one to wonder why, in common with other fine British conductors, why Paul Daniel is so neglected by major British orchestras.