Mark-Anthony Turnage’s Hammered Out was co-commissioned by the BBC and the Los Angeles Philharmonic, its premiere being at the 2010 BBC Proms, David Robertson conducting, and followed a couple of months later by its first LA outing, Susanna Mälkki at the helm. It’s not quite the hard-hitting piece the title suggests, for over its ten minutes Hammered Out brings wit, swing and even a little whimsy to prism its transatlantic big-band gestures. (Imagine Jacques Ibert’s Bacchanale meeting Leonard Bernstein’s Prelude, Fugue and Riffs.) Fresh from Liverpool, Paul Daniel and a fired up National Youth Orchestra (including piano, a couple of saxophones, bass guitar and plentiful percussion) swaggered through syncopations and changes of time-signature, totally immersed in Turnage’s clangourous, gawky and rowdy euphoria. Just occasionally there was a glimmer of the strings. 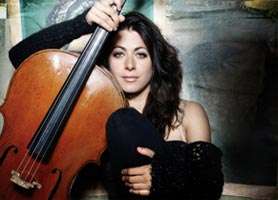 Elgar’s Cello Concerto hasn’t always stood up to the number of performances now demanded of it. It requires from the soloist quiet nobility, something resigned yet with underlying passion – more Janos Starker than Jacqueline du Pré. Natalie Clein’s relative restraint paid many dividends as did her non-interventionist phrasing; the music spoke eloquently for itself but was not impassive. Nevertheless, after a fractious opening, the performance never quite settled, nor absorbed or illuminated enough. She caught well the cello’s mournful soliloquy, but some attacks were discursive. The scherzo-like second movement scurried dexterously if becoming matter-of-fact in broader phrases. The privacy of the Adagio failed to quell persistent coughers, the rendition of it becoming to seem indulgent. The finale found virility and reminiscence, yet some of the time taken here and elsewhere didn’t quite correlate to digging deep enough into the music. A slightly uncertain NYO matched Clein’s unkemptness, although all were devoted.

After the interval there was a simply stunning – tension-filled and incident-packed – account of William Walton’s celebrated First Symphony (finally completed in 1935). This was the NYO playing like a coiled spring. Paul Daniel was a master of the piece and of the NYO, a prime example of living the music and being attentive to his young charges. The first movement bristled with energy and heartache, impulses and opened-out rhetoric. The players were at-one with Walton’s emotional outpouring, the large number of strings (twenty First Violins down to fourteen Double Basses) producing tone of depth and lustre, yet never overpowering the woodwinds (ideally edgy), or being threatened by the outsize and pulsating brass section. The scherzo was fully Presto, with plenty of the requested malice, too – and superbly incisive timpani – all notably sustained to the close.

With the slow movement, launched by a very expressive flute solo from Luke O’Toole, Daniel traded Andante for a daring adagio, the suggested-melancholic music ebbing and flowing from placid waters to darker currents, rapture signalling turmoil and longing, sentimentality avoided. The coda faded to absolute silence – a wonderful moment – out of which Daniel conjured the blistering finale (which gave Walton the most compositional problems), here ebullient and with a biting fugue, a second timpanist and other percussionists then adding to the flames before William Morley offered a seamlessly sensitive ‘last post’ trumpet solo before the ultimate swell of triumph – horns with ‘bells up’ – albeit with a warning in those emphatic final chords.

This outstanding and compelling reading sated any wish to remain for Anna Meredith’s HandsFree (sic), a without-instrument creation for New Music 20×12, with rhythmic clapping to begin with (Steve Reich Rides Again) – I heard that on the monitor outside the Hall – and then some singing. No disrespect to Meredith, but the perform-anywhere, no-conductor-needed HandsFree (however different and however skilled its rendition) just couldn’t follow one of Walton’s supreme masterpieces, nor so soon after this great performance of it.