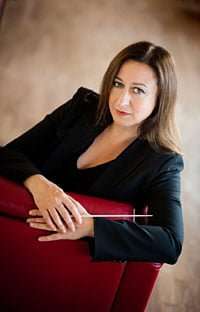 We’ve become rather blasé about the standard of playing from youth orchestras, especially since the arrival of the South Americans, but even so, this NYOGB concert was exceptional. For all the 160-or-so players – reassuring sights such as eleven double basses, three harps, seven flutes, ten horns, three tubas – the sound was robust, lithe and layered, a brilliantly focused ensemble responding to Simone Young’s well-defined tempos and no-nonsense, elegant phrasing. The young players clearly relished the musical styles and types of sound required for their programme of film and ‘art’ music by Jewish and Russian refugees and émigrés from Europe who settled in Los Angeles. 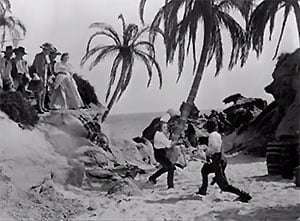 Young kept a tight ship on course in John Morgan’s reconstruction of sections of Erich Wolfgang Korngold’s rampantly glossy score for the Errol Flynn 1935 blockbuster Captain Blood, music so visual that it seems to be behind the camera. It surged and swaggered, and the love-theme was the musical equivalent of Vaseline smeared on the camera lens, achieved by the NYO strings with some lavish swooning. This is music that grabs rather than suggests, then moves swiftly on, and the NYO bathed in its salty spray.

Schoenberg’s Concerto for String Quartet and Orchestra falls between a homage to the Handel Concerto grosso it is based on and a combination of rewrite and deconstruction. The NYO – reduced by about half, but still pretty big – didn’t give enough contrast to separate out the Navarra String Quartet (with Jack Liebeck replacing Magnus Johnston), but was still impressively on top of Schoenberg’s rug-pulling rhythmic swerves. The string-quartet members were thoroughly at home with Schoenberg’s at-times rather hysterical take on the neo-classical idiom, making some passages of their music sound like a fête champêtre inserted into Verklärte Nacht. The impressively played xylophone role in the first-movement fugue and the terpsichorean oddities of the ‘Hornpipe’ finale revealed Schoenberg as a really fun-loving guy, for once wreathed in smiles.

The NYO’s athleticism and cultivated sound really snapped into focus in a terrific performance of Stravinsky’s Symphony in Three Movements. It summed up the musicians’ precocious grasp of the composer’s neo-classical style at the same time as harking back to the weight and youthful virtuosity of the early ballet scores. Just as thoroughly assimilated was the disarmingly sophisticated, sweet-and-sour piano part, superbly played by Thomas Ang.Somehow this was topped with a magnificently confident and vital performance of Rachmaninov’s Symphonic Dances, liberally spiced with some fine solos, among them an impressively bluesy alto-sax solo in the first movement. In between the two works in each half, two members of the orchestra did a spot of Jewish-consciousness-raising in the first and an imaginary squabble between Rachmaninov and Stravinsky over the importance of their music and their fees in the other. I suppose both were intended to lend gravitas and relevance to an otherwise great concert.