Shoot the Moon
Woke up Bling
The Statement 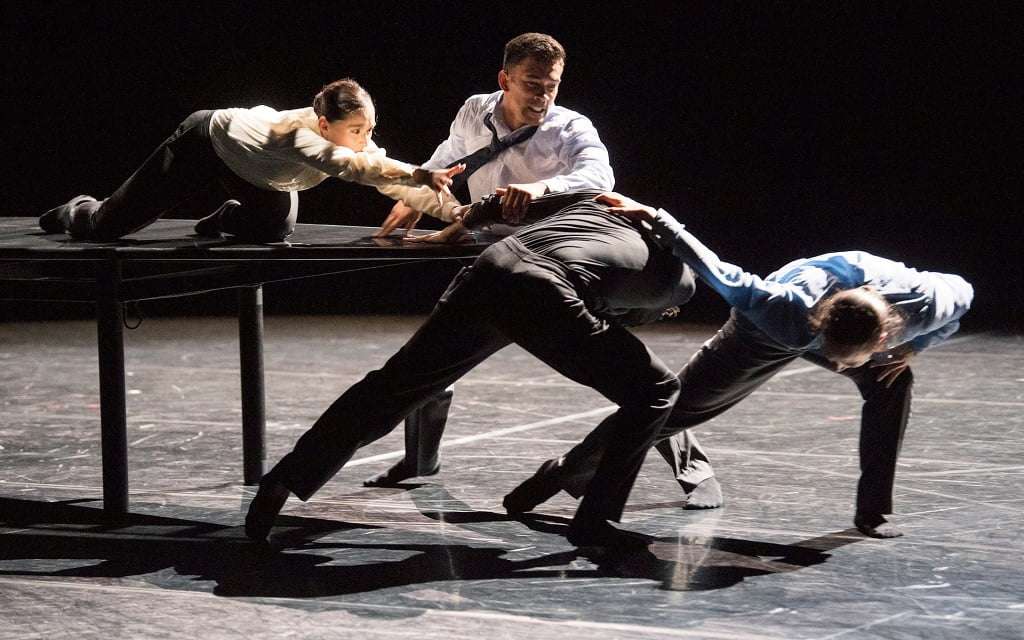 Nederlands Dans Theater is, more than anything else, an ensemble of superlative dancers – each one appearing in their mixed bill at Sadler’s Wells possesses clear individual talents and a welcome personal quality to their artistry. This is important as NDT is very much not a classical company, working on a more intimate scale than that required for the repertoire of full-length works but rather appearing in small groupings in works that are decidedly contemporary. The overarching aesthetic is determined by the William and Mary of the contemporary dance world, Paul Lightfoot and Sol León, who, together, are joint choreographers of a growing corpus of pieces and, separately, artistic director and advisor respectively,. Their creations dominate the performing schedule, although both Crystal Pite and Marco Goecke are company associates.

Lightfoot and León offer Shoot the Moon which comes to London garnered with awards and prizes. It is a clever work, sleekly designed and costumed by the choreographers and featuring ubiquitous video footage. A revolving door configuration to three rooms (which never seems to stop spinning) reveals two couples and one solo man who enact the agonies and angsts of fraught personal relationships to Philip Glass’s atmospheric slow movement from the Tirol Concerto. But it is all rather obvious, from the subject matter of the agonies of suburban private lives to the panoply of silent screams, opaque hand gestures, flicks of legs and arms and the use of mannequin poses, all of which has been seen countless times before, beloved building blocks of innumerable contemporary works used by endless dance creators. The dancers are exemplary, fully engaged in the idiom, extraordinary in the precision and control of their movement, entirely at the service of the choreography, despite its generic quality. This is not bad dance-making – far from it – but it is predictable and lacking in true innovation. Alas, owing to personal circumstances, your critic was unable to remain for their second work, the last on the bill, Stop-Motion.

Marco Goecke’s Woke up Blind is enough to make one wish for stricter border controls; it is a tedious 15 minutes of St Vitus dance, a frenzied, frenetic, frantic quarter of an hour during which the choreographer sets the poor dancers off into a whirlwind of inconsequential and exhausting movement. According to the programme, they “excel in contesting with Jeff Buckley’s vocal power and his frenetic guitar sounds”, and certainly the two recorded numbers of protracted yowling are a perfect complement to the steps and movements on the stage, although unlikely to make one rush out to buy the complete album. Again, one can only marvel at the dancers’ unflagging physicality and their unblinking engagement with this nonsense.

To rescue us from this rapid descent into choreographic hell, The Statement, a 19-minute work from Crystal Pite, choréographe du moment, who is seemingly incapable of putting a foot wrong. Her 2016 work for the company is clever, witty, atmospheric and dramatic, a genuinely innovative interpretation in movement of a one-act play of the same name. A bare stage with only an elliptical business-meeting table at its centre and a hanging black sheet which masks lights behind, four dancers, the recorded dialogue and Owen Belton’s music are given the spark of dance life by Pite’s extraordinary movements. Firstly, the dancers mime the conversation we hear, with occasional lower body embellishments, and in this The Statement initially resembles other works in which dancers move to speech, from Cactus to Ballet 101 and even Pite’s own Bettroffenheit. It catches the attention, and is light and witty, but soon turns darker as the tables seem to turn on the official sent to sort out military or political intervention gone wrong, the search for a scapegoat widening. Speech breaks down and the movement becomes more expressionistic, the table used as barrier, platform, hiding-hole and stage. Pite’s choreography focusses on attraction and repulsion, bodies at times swept hither and thither as the situation and the individuals’ ability to control it flies out of control and retains a deep and true humanity at all times – these are people and not choreographic marionettes. Lighting is stunning, subtle and direct, sharp and hazy, bringing such variety of atmosphere and emotion to such a short work. NDT1’s quartet of dancers served this stunning work to their considerable best.