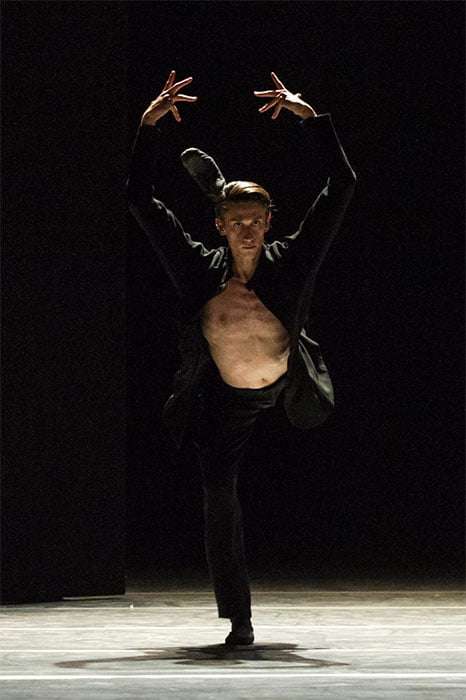 NDT2, the younger offshoot of Nederlands Dans Theater, is a fairly regular visitor to these shores; indeed it is coming to an end of an extensive tour of the UK, which is all to the good, as the dancers are young professionals between the ages of 18 and 23, who thereby gain invaluable stage and touring experience. Its latest programme at Sadler’s Wells highlights both the strengths and weaknesses of this admirable ensemble, and showcased at least two names to watch in the years to come.

The director is Paul Lightfoot, who, with his wife Sol León, form a memorable and indissoluble double-barrelled partnership, the William and Mary of the dance world. Lightfoot/León have a great deal going for them – they have a sure sense of theatre and are confident in their use of the stage, often presenting striking images which stay in the memory; they are also catholic in their musical tastes, drawing inspiration from a variety of sources, and they brim with inventiveness. However, as demonstrated by an overlong triptych of their works which formed the first third of NDT2’s evening, and came in at a distinctly over-extended hour before the first interval, their movement palette and general dance aesthetic is depressingly mundane, a predictable combination of long-limbed extensions, held balances and fussy hand movements. To which can be added, silent screams, shouting out, jokey walks and every twitch, shimmy and shake in the business which do wear distinctly thin very quickly.

Schubert is a clever-clever duet which only acquires some depth in adagio movement, while Some other Time is weighed-down by its pot-pourri of Steve Reich, an indigestible dish of deeply soporific music to which equally soporific movement has duly been paired; only in the final trio when the hints of some yearning relationship broke through the slew of tedium did this work arouse interest. At least Sad Case is set to Mexican band music (Perez Prado and his ilk), so there is something jolly to listen to, and it inspires Lightfoot/León to some genuinely amusing choreography which is, unfortunately overlong and rapidly acquires a “look at me and see how clever I can be” sheen. What this jokey, burlesque work with its encyclopaedia of silly walks and gestures did on this occasion was to highlight the considerable talents of Gregory Lau, a slender Hawaiian whose movement quality is fascinating, combining an ability to switch from languid to explosive in a split-second. Equally notable Dutchman Guido Dutilh, a tall, blond dancer with long limbs and an intense quality to his movement.

After the long-windedness of the first section, Edward Clug’s non-descript mutual comfort was a brief interlude in which four attractive dancers indulged in some impenetrable interaction before it all came to an end. Veteran Hans van Manen, a founding father of NDT, showed exactly what quality contemporary dance can achieve with his 1997 Solo to the fiendish Bach Partita No.1 for violin; in 7 minutes, his free and open reaction to the music set three dancers (never dancing together except at the very end) becomes a whirlwind of movement, the male trio put through their paces as Bach weaves his sound-web around them. It is heady stuff, and all three young men were up to its considerable demands, yet again it was Lau and his distinctive movement quality which set him apart from his peers.

Lau was again to the fore in Cacti, Alexander Ekman’s international calling card. In a central duet, the thoughts and discussions of a pair of dancers are heard in recording as they perform the choreography. It is clever, and amusing, even if these dancers, Lau included, have not yet developed the acute stage presence that makes this duet, and indeed, the entire work really sing. It is zany, at times surreal stuff, 16 dancers atop square white plinths at its opening, indulging in some complicated synchronised and syncopated movements. Moved to form a chess board on the stage, these little stages provide ever-varying combinations of dancers their moment literally in the spotlight. It is great fun, and continually surprising, an audience laughing not only the madcap nature of it all – cacti do feature heavily in this work, along with a dead cat – but also the verbose psychobabble which intermittently comments all-too-familiarly in tone on what they are seeing. It is, above all, an ideal training piece for young dancers who have to act as an ensemble but also establish themselves as individuals on stage.

NDT2 and its dancers are only to be applauded, bright hopes for their art form indeed; alas, the repertoire they dance could be better, more stimulating for them and, ultimately, their audience.