In a dance-starved London, the arrival of NDT2, the ‘junior’ branch of the Nederlands Dans Theater, at Sadler’s Wells meant for a full house on opening night. This is a hugely engaging company, whose dancers range in age from 17 to 23. By being members of NDT2, these youthful artists gain far greater exposure in performance than many others of their age who languish sometimes as apprentices or back-row performers in ‘adult’ companies. It has always been the company policy for these youngsters to experience work with major choreographers, those whose creations are commissioned internationally. Thus, in a triple bill, the dancers have experienced both Lightfoot/León and Ekman and learnt a major piece by European dance guru Jiři Kylián. It is an undertaking to be lauded.

All three works clearly displayed both the strengths and the weaknesses of European contemporary dance. They were superbly set and lit: the set for Passe-partout was sensational, a set of heavy panels representing an enfilade of receding doorways was flown not only vertically but also across the stage, presenting dizzying perspectives; the design would make for a superb setting for Duke Bluebeard’s castle. 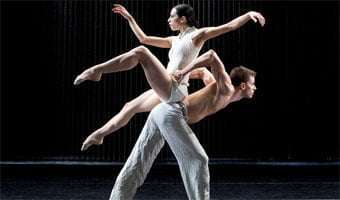 Equally, in Dogs and Gods, Kylián’s stage high and wide curtain of thin metal chains made for visually stunning effects; as it was rocked back and forth from the flies, the undulating surface caught the light and the whole shimmered mesmerizingly like the aurora borealis. In Cacti, Ekman’s brilliant idea of using a square podium for each of his 16 dancers, lit from above by precisely positioned spotlights made for amusing and witty stage pictures. The standard of presentation was extremely high. Equally, the lighting of all three works was inventive and effective, the designers making novel and telling effect, all intelligently interacting with the stage set and dancers to present a visually satisfying stage pictures. Musically, all three works were characterised by the ‘pot pourri’ approach to music for dance, a sort of aural pick-and-mix, born, one fervently wishes, out of some other reason than a single composer not being able to match the dazzling inventiveness of the choreographer. We shall never know.

Choreographically, matters were rather more mixed. The hit of the evening was Ekmann’s Cacti, an ultimately irresistible piece of surreal nonsense which nevertheless made full use of the thrill of seeing sixteen dancers move both as one and in canon. Ekmann has wit and his irreverent take on the musical mish-mash was infectiously amusing but quite what the cacti represented (each dancer brought one on at one juncture) is anybody’s guess. The work divided broadly into three sections, the first with all sixteen dancers crouched on their own podium, slapping, tapping and banging in counterpoint to the Haydn – it sounds kooky; it was, but was also oddly engaging. The second used the whole stage, podia arranged in a grid pattern, each spot-lit form above – the jokey, freestyle dance of couples, solos, groups and the whole ensemble again raised a smile. The third was essentially a pas de deux accompanying a voice-over of both dancers ‘talking’ their way through the duet, replete with commentary, interjection and explanation – it was as if we could hear what normally mute dancers thought as they danced. Witty and successful. Difficult to single out any dancers, but Spenser Theberge clearly has presence and promises much as a performer – he was highlighted in all three works of the evening.

Commentary of a different sort accompanied the first piece Passe-partout by the Gilbert and George of contemporary dance Sol León (a woman) and Paul Lightfoot who apparently create in total unison. The commentary came from two dancers sighing, grunting and interjecting their way through sections of the music. Very silly; very irritating; very, very unwelcome. Elsewhere, the movements were at their best when slow and measured (Astrid Boon in a heavy full-length dress made for a sinister Mrs Danvers-like figure, although the sight of her breasts under the short jacket she wore was more Amsterdam red light than high art). Lightfoot/León use the set well, dancers appearing, disappearing, being revealed. I was particularly taken with the duo of David Ledger and Marne van Opstal, who responded eagerly to the work, throwing their rangey frames into its every extremity of line. Quite what it all meant however remains an unknown.

Jiři Kylián, the High Priest of European Dance, was represented by his 2008 Gods and Dogs, a frustrating work which showcased some quite beautiful moments and elsewhere simply chundered on. Costumes for this work were of the pyjama bottom, short blouse and knickers variety (rather than the cycling shorts, bra and bare torso version) and, again, these young dancers threw themselves wholehearedly into it all. Quentin Roger’s movement quality and stage presence were captivating – he brilliantly delivered a twitchy, angst-laden solo, and Olivier Coëffard and Chloé Albaret’s duet struck forcibly by the clear communication between the two, a close pas de deux with their bodies sinuously moving around each other. The Dog part came in with a projection of a bounding canine, which appeared at various junctures, each time unfathomably rather larger. Of the Gods, little was seen; perhaps an allusion to Pygmalion’s animation, perhaps not. Were the dancers supposed to be gods?

NDT2 possesses some very promising artists who throw themselves heart, soul and body into whatever they are called upon to do. Production values and design are top-notch; it is the choreography that worries.