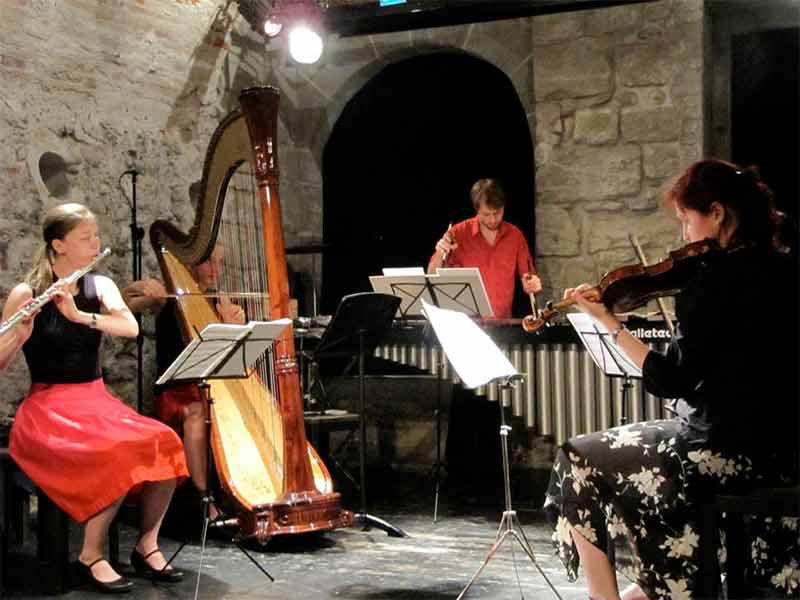 neuverBand, a contemporary music ensemble made up of young musicians and based in Switzerland, totals nine members from across the instrument families. For its 2015 project, n3, it has put together three programmes consisting entirely of trios. This was the first.

The constant rotation of the players kept listeners’ ears open and the trio settings revealed perfect balance between the instruments. The repertoire was fresh and exciting, all the pieces having been written within the last twenty years. The only quibble was that there was entirely too much of this repertoire: eight pieces (and there should have been nine; one was postponed), with a running time of over two hours.

Gare du Nord is a dark hall attached to a train station and can feel cold and unwelcoming. The ensemble lit up the room from the very beginning with an energetic performance of Philippe Leroux’s De l’Epaisseur (2011) for accordion, violin and cello. The direct attack perfectly suited the piece’s jagged themes. The following work, l’Usage de la Parole (1999) by Frank Bedrossian, for clarinet, piano and cello, was full of bubbling joyful notes that concluded in a storm of sound from the piano.

neuverBand is at its best in expressive pieces and can give free rein to emotional and musical engagement and fare less well in works by more intellectual composers such as Helmut Lachenmann, whose Trio Fluido (1997) for clarinet, percussion and viola was given with respect if not much else. No feeling the love here: the piece was bloodless and could have been cut from the evening along with Klaus Lang’s static and repetitive Origami (1995) for flute, accordion and cello. This would have spared the audience two works of empty if well-organised sound.

Johannes Maria Staud’s Sydenham Music (2011) for flute, viola and harp created an intimate space in which the harp dominated, veering between dissonance and romantic gestures. This was followed by the most intense of the pieces: Omaggio a Burri (2015) by Salvatore Sciarrino for flute, clarinet and violin. Full of quiet tapping and pianissimo air effects that were strangely frightening, the work seemed to threaten a building explosion that was never realised.

Two of the works on the program were commissioned by the ensemble. Stefan Keller’s Schaukel (2015) for piano, violin and viola unleashed great waves from the keyboard that were offset by concentrated motifs in the strings. The piece swung between these gloriously loud moments and quiet interludes that verged on romantic but were less convincing. The second commission, Spleen à l’aéroport Roissy-Charles-de-Gaulle (2015) by Benjamin Attahir, employed not just the accordionist, percussionist and harpist, but also their voices. The players spoke in rhythm as they played and the text brought forth plenty of chuckles from the audience. Despite a monotone effect (has this young composer discovered dynamics yet?), it was refreshing to hear a piece that embraced humour and playfulness as an integral aspect of musical communication.

The ensemble’s dedication to new music is matched only by an expressive power that fully dismisses the stereotype of contemporary music being dry and incomprehensible. These musicians connect with the audience and transmit an energy and beauty of sound that made this recital a joy to hear.