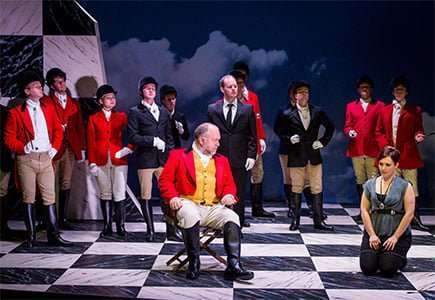 This is Nevill Holt Opera’s first year of going it alone, after a long-standing connection with Grange Park. On the evidence of this Magic Flute, David Ross’s new company has much to offer the summer country-house opera world, and the setting in deepest Leicestershire is particularly lovely. The Chalmers/Mears/Holdsworth trio have worked together for Second Movement and Northern Ireland Opera for a number of years, and their achievement in the Nevill Holt theatre, built into the house’s stable block, is just as imaginative.

Designer Simon Holdsworth’s set of detachable vertical blocks could move quickly and quietly into various configurations, and there was effective use of epic backdrops of sky and, at the end, of the dome of the Pantheon. Director Oliver Mears makes Mozart’s Singspiel a contemporary rite of passage, and our first sight of Tamino, trapped in a cartoon-like game of snakes-and-ladders, is of him dressed in an Uppingham School blazer (the school is just up the road from Nevill Holt) and there may well have been other local references and in-jokes that passed me by. Mears puts the masonry within the context of the arcane rituals of a public school, with Sarastro as much an enlightened headmaster as head of an exclusive secret society. 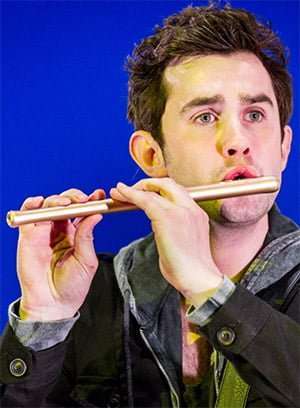 Some of Mears’s direction worked well – I particularly enjoyed the two decorously draped women adopting tasteful attitudes for the voyeuristic delectation of Sarastro’s staff during the Priests’ March at the opening of Act Two; and Tamino, stripped almost to the buff, creeping into the Queen of the Night’s giant skirt during her first aria to re-emerge in decidedly non-public school drainpipe jeans and grungy T-shirt. Other bits of direction didn’t work – the noisy dismantling of the cardboard moon to feed the fire of initiation and the trial by water indicated by a priest washing something off Pamina’s neck were puzzling. The most important thing, though, was that this Flute got the mix of moral fable and broad pantomime just about right, although I’ve yet to see a production that would make me want to belong to Sarastro’s gang.

There wasn’t a weak link in the cast. As a geeky-but-personable Tamino, Anthony Gregory sang with an unaffected sweetness of tone that suddenly surprised you with its passion and power. The production was fortunate in fielding a strongly played, funny Papageno in Alexander Robin Baker, whose attractive voice and natural comic timing had the audience eating out of his hand and his robust way of charming the birds out of the trees. Rhian Lois was an appealing Pamina, not succumbing to the role’s irritating passivity, and she delivered a heart-breaking ‘Ich fuhl’s’. Allison Bell dealt easily with the range of the Queen of the Night’s two arias, although she was technically more comfortable in the second. She looked vampishly great, too, ably supported by a formidable trio of red-lipped tarty/grungy Ladies. I much enjoyed Daniel Norman’s well-sung Monostatos, presented as Sarastro’s pervy, lusting chauffeur. Richard Wiegold’s commanding voice and presence gave Sarastro his usual mystery and authority. There were some charming directorial flourishes for the Three Boys, equally charmingly sung and acted by a trio from London.

Nicholas Chalmers (and Nevill Holt Opera’s artistic director) worked wonders with the small orchestra that played with a buoyant sense of pace and ensemble. The company has set itself a very high standard.