The Red Shoes – Ballet to choreography by Matthew Bourne based upon the film of the same name by Michael Powell and Emeric Pressburger, itself based upon Hans Christian Andersen’s fairy-tale 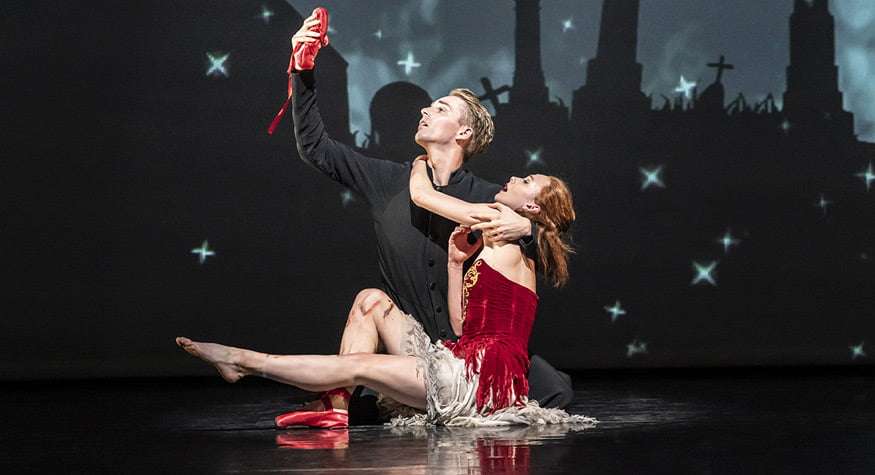 The Red Shoes is arguably the finest film about ballet and the theatre ever made; Michael Powell and Emeric Pressberger’s 1949 masterpiece has inspired generations of dancers and audience alike with its tale of obsession in the flamboyant world of what is a masterly evocation of the legend of Diaghilev and his Ballet Russes. Sir Matthew Bourne, whose particular brand of theatrical dance-drama has become such a staple of the British dance scene, now revives his 2016 stage-version at Sadler’s Wells for his company’s annual Christmas season. It is a near-unmitigated delight, true to the spirit of the original film but untrammelled by any slavish adherence.

The designs by Lez Brotherston and Paule Constable’s lighting are masterly, allowing for rapid changes of location and mood, the central scenic idea being a proscenium arch which moves backward and forward, to the left and right and spins, allowing the cast and the audience to step behind the curtain. Bourne, unlike many prolix choreographers, fully understands that brevity is the source of theatrical genius, so the whole show, including interval, is done-and-dusted in a smidgen over two hours. This means for a fast-moving narrative which whisks us between London, Paris and Monte-Carlo within which he allows himself to expand and develop ideas in extended scenes. This does lend the narrative a certain stop-start quality, which is, perhaps, this show’s only real flaw, but in all it makes for glorious entertainment and ensures that The Red Shoes is Bourne’s most ‘danced’ dance work. Yes, all his trademark sharp-eyed social commentary is there, his uncanny ability to make the slightest inclination of the head, the arch of an eyebrow, the flick of a wrist genuinely funny but there are also swathes of actual dance without wry or camp comment. A particular theatrical highlight is the scene in an East End vaudeville theatre after Julian Craster and Victoria Page’s departure from the Ballet Lermontov which features an hilarious Egyptian ‘sand dance’ by two unengaged performers – Bourne not only pays tribute to the history of ballet, but also to our wider theatrical traditions. 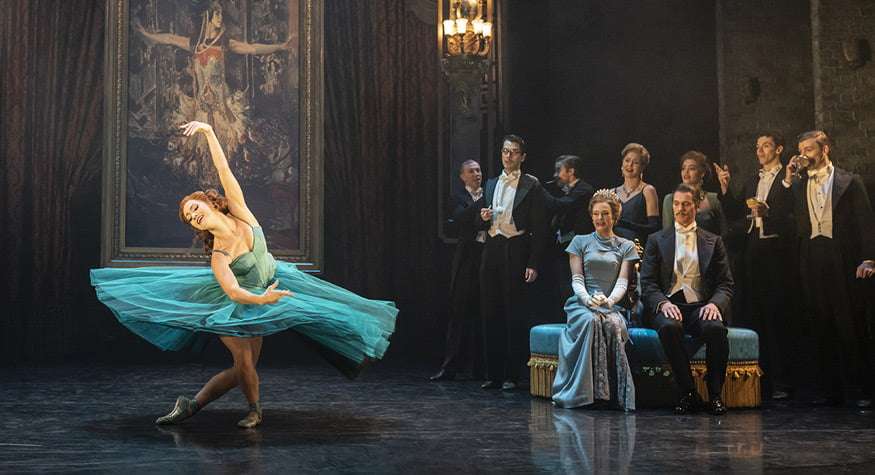 That said, this show is essentially about ballet and, while Bourne is not a ballet choreographer, his love and admiration for the genre, allied to some meticulous homework, shine through in movement of real quality. He has absorbed the period stylistic traits of the Ballets Russes and the companies that followed, so the beach cavortings at Monte-Carlo are clearly inspired by the Art Déco angularities of Nijinska’s Les Biches and Le Train Bleu, while the later ‘Concerto Macabre’, with Cocteau-esque designs, is very Serge Lifar with more than a dash of Frederick Ashton’s Dante Sonata. While The Red Shoes works brilliantly for anyone with no knowledge film or ballet in general, it contains a great deal to delight the balletomane, with cheeky references to the heady days of the early decades of the twentieth century. And not to the dancing alone – a delightful scene in which Ballet Lermontov’s reigning ballerina Irina Boronskaya rehearses Les Sylphides sees her walking around the stage in fur coat and high heels merely carrying her sylph costume to give the follow-spot operator the right positions. The great British ballerina Alicia Markova is said to have done exactly that; it is a nod not only to ballet, but the legends of ballet. 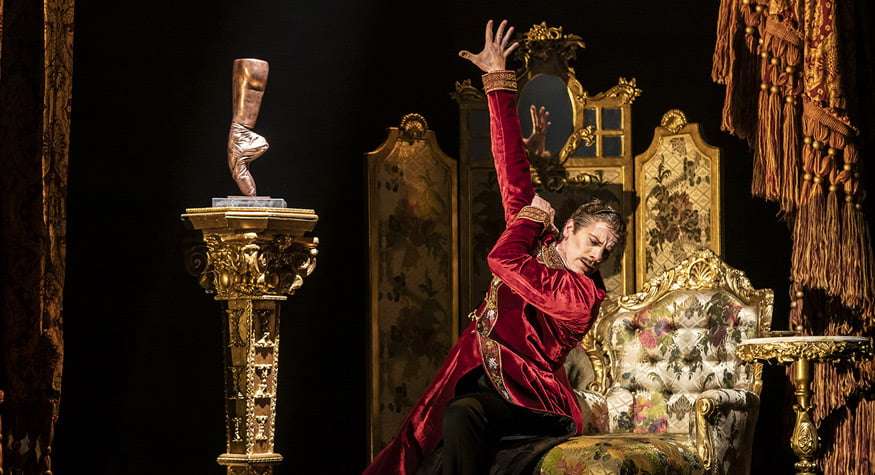 Bourne’s company is uniformly strong. As the fearsome impresario Boris Lermontov, he has called upon an old collaborator Adam Cooper, the original Swan in his Swan Lake; it was a judicious choice. Such is Cooper’s mastery of the stage and knowledge of his craft that he makes this Diaghilev-like character absolutely central to the narrative, more so, in fact, than when the show was new three years ago. Stiff, nervy, moody, Cooper’s character nevertheless betrays his desires and doubts which boil beneath the surface and his rage when Victoria Page, his muse, falls for the young composer Julian Craster. As Victoria, Cordelia Braithwaite brings all her experience to a rounded portrayal and fully convinces both as a ballet dancer and a love-struck young woman. Dominic North is marginally stronger as the embattled young composer than as her lover – his solo showing the torments of composition is emphatic and fully charged with emotion whereas his interaction with Braithwaite is at times a tad generic. The superb Liam Mower delights as a camp Grisha Lyubov, the company ballet master and choreographer while bringing a sinister quality to the Svengali figure of the ballet ‘The Red Shoes’ and exulting in a ram-headed Dionysius-like deity in ‘Concerto Macabre’. The young Jackson Fisch impresses with his distinctly ballet physicality as the lead male dancer Ivan Boleslawsky, even if he does not yet have the stage presence needed for a role taken in the film by Robert Helpmann; his intimacy with Lermontov’s secretary, played with telling detail by Ben Brown, is heart-warming. Bernard Hermann’s music in Terry Davies’s orchestration is played with gusto by the orchestra under Brett Morris.

This is a superb show, a warm and faithful tribute to a great film, to the legendary dancers of the past and to the continuing power and potency of theatre. Casts will change but The Red Shoes ‘vaut le détour’.