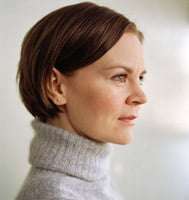 Camenae were Roman goddesses from fountains and springs. Chains of Camenae is Veli-Matti Puumula’s sense of constraint, due to the intellectual structure he imposed upon himself. The beginning is simple and impressive. A sequence of isolated sounds held portent. A longer, thicker section followed. Often too turgid to make much sense, several strands of music sounded out concurrently – 5 tempos, 13 instrumental groupings and 21 different formal units. Puumula calls this section “parametric polyphony”. Chains also refers to “3 events placed end-to-end’. These ramifications may have been ‘fun’ to plan, but were not overly ravishing to hear. In the simpler last section, phrases the ear could catch suggested potential for development; but, alas, it was too late. The work was at its end.

Jouni Kaipainen has recently discovered tonality, under inspiration from Charles Rosen’s book “The Classical Style”. The resulting two preludes begin simply and tonally, recalling romantic classicism from the early nineteenth-century (Mendelssohn or Weber). They then moved to a more aggressive louder, faster and more atonal middle section, returning to limpid tonality for the close. The difference in style was marked, rather too obviously. The decision to juxtapose them was not particularly illuminating.

Lauri Kilpiö’s Strata made more sense. Here was a genuine amalgam of modern and tonal. Paavali Jumppanen achieved some dazzling piano effects, fascinating to hear and watch – such as both hands scrabbling animatedly over a range of piano-keys in the uppermost register, like dawn birds chattering. 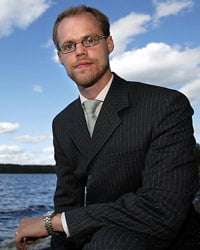 Uljas Pulkkis’s Enchanted Garden is a single movement piece in eight sections, the violin obbligato amounts to a short concerto. Jaakko Kuusisto’s 1702 Matteo Goffriller was most engaging – genial and suave. He played from the centre and from the left and right – against various sonic backgrounds. In some sections, he rested. The piece lay easily on the ear – an attractive bit of tonal sound-painting.

Jukka Tiensuu’s Alma II – Soma had something almost as rare as melody in modern music – a marked beat. Rhythms strode through the piece with colourful assertion and vitality. A minimalist section slotted easily into the work, like some gypsy or Turkish ‘moment’ from Haydn or Mozart. Tiensuu is the senior composer represented here. His extra years have given him time and experience to absorb the various styles of ‘contemporary’ music and to deploy them more sure-footedly. Alma II – Soma, together with Maro, was the most striking composition of the evening.

Kimmo Hakola’s grew up by the Gulf of Finland and, in Maro, aims to evoke these waters’ present-day actuality, the mythology associated with the sea and his childhood ambitions of becoming a Sea Captain. We progress from sea-spray to undulations ever-more turbulent, turning into a marine tempest of thunderous power, expressed in a powerful, grim, virtuoso sequence for trombones, bass tuba, trumpets and horn – the brass of the BBC Symphony Orchestra, on splendid form. The storm over, the sea does not subside: it remains powerful, dangerous and restive. The piece finishes abruptly – time having run out, rather than dangerous current and tides having ceased.

Credit is due to the slight, determined figure of Susanna Mälkki, ably propelling the BBCSO so successfully through all the quirks, angularities, obscurities, beauties and sometimes-stunning sonic effects of these diverse pieces.