Moves – A Ballet in Silence

The Concert, or the Perils of Everyone – A Charade in One Act
Music – Chopin

After a less-than-first-rate start, NYCB most certainly got into its stride with this delightful all-Robbins programme. 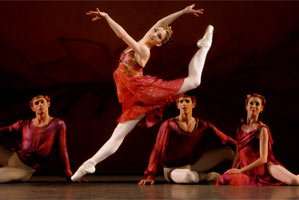 Jerome Robbins was a Founder Choreographer of the company alongside George Balanchine, but his pedigree was altogether different. Instead of the latter’s Imperial Russian training, Robbins was essentially a hoofer, a Broadway dancer, who shot to notice in the ballet world when, having joined Ballet Theatre in 1940, he choreographed Fancy Free for the company in 1944. In addition to creating memorable works for NYCB, he also kept one foot firmly on the commercial stage and delivered the famous dance sequences of “Fiddler on the Roof” and “West Side Story”. His dance vocabulary is freer than Balanchine’s, less academic, and full of crossover movements from Broadway. As a result, his work has an immediate appeal.

This was nowhere more evident than in his 1979 showpiece for the company, The Seasons, a divertissement depicting the four seasons to Verdi’s music for “I Vespri Siciliani” (with additions from “I Lombardi” and “Il Trovatore”). Robbins followed Verdi’s scenario closely and produced a delight: it is witty, light-hearted, not a little camp at times and hugely enjoyable, and was given a splendid performance by the company. 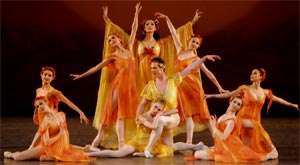 Robbins moves effortlessly from classical dance showcase to vernacular movement – the female dancers of ‘Winter’, for example, shiver and rub their arms and legs in an effort to keep warm, yet still deliver enchaînements of classical beauty. It was a real pleasure to see the company allowed to have fun with all the demi-caractère opportunities Robbins’s work offers them.

‘Spring’ is the most successful of the four sections, with Sara Mearns making a real impression as the lead girl, partnered ably by Jared Angle. Mearns has the quality of a ballerina (but is still a soloist), and easily encompassed the technical demands made on her. ‘Summer’ is the least interesting: a short orientalist interlude which wasn’t quite odalisque enough to grab the attention.

The fireworks are saved until the end, with the spectacular ‘Fall’, here highlighting Ashley Bouder’s steely technique and insouciant stage persona Benjamin Millepied, who gamely took on the challenges of a role originally created for Mikhail Baryshnikov. Daniel Ulbricht, a short, chunky little dancer who, as the faun, stopped the show with a cascade of brilliant steps, has elevation in spades, an irrepressibly cheeky personality and boundless energy. All in all, this was a fun beginning to the programme. 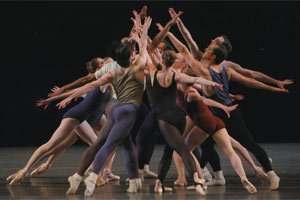 Nothing could be more different than the 1959 piece Moves, which is performed to silence. It makes great demands on the dancers in terms of synchronising their movements without the help of a score but also contains a fascinating exploration of the classical dance vocabulary to which Robbins characteristically adds other influences. The sound of feet stamping on the stage is rare in ballet for which silence is always the ideal; here whole sections are punctuated by the sound of the dancers’ feet.

Other sections see the movements of warm-up at the ballet barre taken and twisted; pas de deux are delivered, except that not every dancer has a partner, which leads to a certain dislocation of the accepted norm of the dance idiom. As an exposition on dance and dancers, Moves continues to be quite brilliant nearly fifty years after its creation, maintaining its power to surprise and to make one think. The universally young cast performed it exceptionally well and never wavered from the utmost concentration that is required to bring this work off. 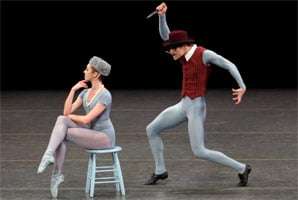 The Concert is known to London from performances by The Royal Ballet, but it is always good to see it again; it is, quite simply, one of the funniest pieces of dance ever created. As a matter of interest, Ed Gorey’s masterful front curtains, so beloved to London audiences are only used by the London company, and were indeed commissioned for the ballet’s entry into the repertoire in 1975; New York makes do with Saul Steinberg’s inferior cloths.

The conceit is that the bizarrely dressed dancers are attending a recital of Chopin’s piano music. What we see is essentially their thoughts made real and, in the case of the last section, taking wing as all the dancers become butterflies and are chased around the stage by an exasperated soloist. 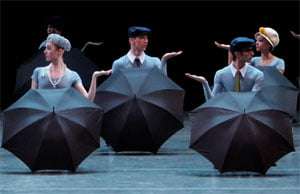 Sterling Hyltin played the daffy lead girl who becomes the object of desire of the put-upon Husband, played with great gusto by Andrew Veyette. Hyltin performed the role with relish, acting her socks off, and raising the requisite laughs in the hat shop interlude. Robbins is not all belly laughs, even in this comic ballet, and the raindrop prelude is accompanied by the strangely beautiful sight of the entire cast walking back and forth across the stage, open umbrellas held aloft.

But laugher is the main aim, nowhere more so than in the ‘Mistake Waltz’ in which the six girls are carried in like half a dozen Coppélias and proceed to deliver a pas de six characterised by mistake after mistake. Ballet goers will recognise the sheer terror of seeing one member of the corps go the wrong way, or lift the wrong arm, or miss a cue. Here every disaster that can befall a group of dancers does, with increasingly hilarious results. This performance was very funny indeed, but just missed out on that last degree of mounting audience hysteria that the best of ensembles deliver. But that is a minor gripe – it was splendidly executed, and sent the somewhat sparse Coliseum audience out into St Martin’s Lane with a spring in its step and a smile on its face.