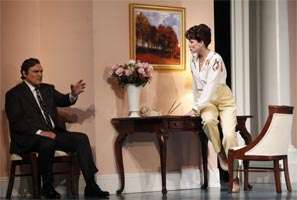 “A Quiet Place” is anything but quiet. The dysfunctional, frenetic suburban American family that is at the centre of the opera never seems to let up in its emotional outbursts and disjointed fantasies and desires. One member of the chorus even shouts out in Act One, “What a fucked-up family!”.

The opera’s title comes from Dinah’s lyrical Act Two aria ‘There is a Garden’ (from “Trouble in Tahiti” in a flashback), in which she tells her analyst of dreaming herself in a ravaged garden from which she can’t escape but where she hears an unknown voice telling her of another garden where “love will teach us harmony and grace. Then love will lead us to a quiet place.”

The score of “A Quiet Place” is a web of leitmotifs based mostly on themes from “Trouble in Tahiti,” a one-act opera written thirty years before. The imagery of the earlier libretto and the core element of jazz are also elaborated in the character of Junior, whose insanity is portrayed in fragments from “Trouble in Tahiti”. “A Quiet Place” attempts to capture the broken, searching rhythms of modern American life and language of the early 1980s. Leonard Bernstein’s only full-length opera and final completed stage-work. 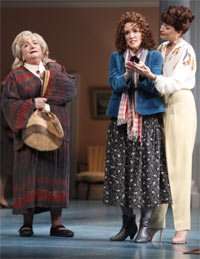 ”Trouble in Tahiti” takes a satirical look at 1950s’ American suburban life by gently exposing the illusion of contentment through its candid portrayal of a couple’s failing marriage, including a simulated sex-act between young Sam, who is married to Dinah, and his secretary. “A Quiet Place” offers a darker and more emotionally wrought examination of the same family thirty years later. What was satirical, melodic and jazz-inflected becomes deeply psychological and percussive, moving fluidly between tonality and atonality.

The chorus, constantly singing about and commenting on the characters and on the situations unfolding, is so important; without the chorus, the opera would not be as powerful and captivating. On this occasion it was in majestic form, both in its serious and mocking singing and commentaries and when moving about the large stage quite effortlessly, whether walking forward rapidly or slowly gliding backward to exit.

Jayce Ogren conducted masterfully in his City Opera debut. He handled the stylistically far-ranging score with assurance and skill. And the orchestra responded superbly, such as in the first music heard with its flute over soft strings or in Junior’s entrance in Act One with the orchestra to powerful effect passing a sad, fragmentary motif from the lower strings to higher instruments or in the moving Act Three postlude.

All the singers were vividly costumed and the production was effective – the large funeral parlour (where Dinah’s body lay after being killed in a car crash) with its tacky pale-pinkish walls served as a practical unit set for the entire opera – from the flashback scenes in Act Two to Dinah’s long abandoned garden in Act Three (in which the lighting was especially resplendent). 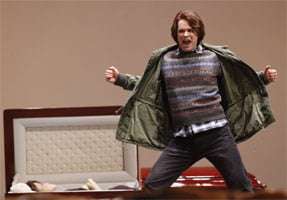 The singers were in generally top form, both in singing and in acting. Joshua Hopkins was the star of the evening, and not just because of the intimidating role he had to play. His lush, expressive voice and admirably nuanced acting convincingly showed the mind of a mentally-ill person who craved love and stability (his former lover François is married to Dede, Junior’s sister). His Act One ‘Hey Big Daddy’, in which Junior loses all self-control, strips off some of his clothes burlesque-style and accuses his father of killing Dinah (Junior’s mother and the father’s wife) was a thing to behold.

Patricia Risely (Dinah) sang the bravura aria ‘What a Movie’ (the movie in question being “Trouble in Tahiti”) quite well, invoking the beguine- and rumba-rhythm ballad with flamboyance. At times though, her diction was unclear and her voice too soft; but Risely did handle ‘There is a Garden’ with aplomb and fine inflection of voice, letting us know how desperately she wanted things to be right between her and her husband Sam. 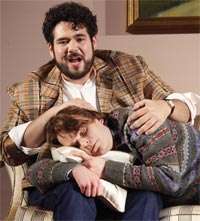 Louis Otey was excellent as Sam, particularly in the blistering, wrathful Act One aria ‘You’re Late’, in which Sam excoriates his son Junior for arriving late and dishevelled to the mother’s funeral. Christopher Feigum was likewise superb, his lyrical, clear, expressive voice shining in the Act Two aria ‘There’s a Law’, about winners and losers, leaving no doubt to which category he belonged.

As Dede, Sara Jakubiak’s penetrating voice was laden with pathos and anger, which qualities were abundantly demonstrated in the Act Three aria ‘Mommy, are you there?’ She also showed a satirical side in the jaunty Act Two jazz number, ‘Mornin’ sun’, which evoked an idyllic suburbia. As François, Dominic Armstrong’s strong, melodious voice and fine acting served him well all evening – witness his Act Two aria ‘I’ve Been Afraid’, in which he passionately sings to his wife Dede, about how much she means to him.

Judith Christin (Susie) and Victoria Livengood (Mrs. Doc) added many memorable satirical and caustic moments to the opera, with Livengood’s powerfully emotive voice being especially remarkable. The rest of the singers also sang and acted to a high standard.

“A Quiet Place” is a combustible work. The conjunction of two separate works makes for an explosive combination. Perhaps it’s dated somewhat, but the music is still brilliant, as it confronts several different kinds of truth, all of which this production summoned forth.