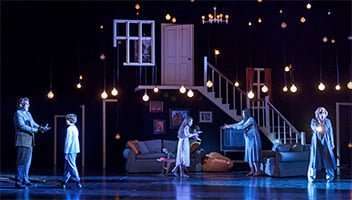 This is Benjamin Britten’s centenary year, and New York City Opera is celebrating it with a new production of The Turn of the Screw (1954), which sets Henry James’s quintessentially creepy tale. Sam Buntrock, best known for directing the highly successful Broadway revival of Sunday in the Park with George in 2008, is making his opera directorial debut. Set in the middle of the nineteenth-century at Bly, an English country house, a Governess is hired to care for two orphaned children, Miles and Flora, and undergoes harrowing supernatural encounters with the ghosts of her predecessor, Miss Jessel, and a former valet, Peter Quint. 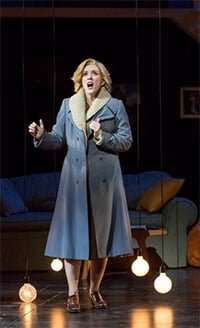 Buntrock has anchored the opera in the 1980s, immediately evident as the Governess makes her way to Bly not in a horse-drawn carriage but in a car that is cleverly depicted by a projection of a huge windshield and rearview mirror behind and above her as she stands facing the audience. The staging is rife with references to films such as The Shining, Poltergeist, and others in the horror genre. Miles plays with Star Wars toys as Flora plays with her doll. The television set in the living room, when left on by the children after watching cartoons, carries news of the Falkland Islands conflict (which serves to emphasize the menacing nature of the story), and its screen flickers with unclear images whenever the ghosts of Quint and Jessel appear in the house.

David Farley’s set is dominated by the living room, which remains visible but dimly lit when the action is taking place elsewhere – Miles’s upstairs bedroom, a classroom, or in the grounds, and his costume designs are of simple clothing from the 1970s and 1980s. David Weiner’s lighting not only underlines the haunted tale but also, through ghostly facial lighting, makes palpable the fear that grips the four characters who are not ghosts. Multiple light-bulbs hanging above the stage give a celestial quality, and when the stage is bathed in darkness and the bulbs come on, the result is both dramatic and beautiful. Sets, costumes and lighting act in unison. 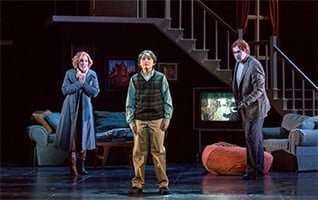 Jayce Ogren’s conducting and the orchestra’s solid playing held the disparate dramatic elements together wonderfully. In the ‘Prologue’, setting the scene, the piano-playing was sublime, and later there were bewitching sounds from harp and haunting pathos from cello. Britten makes particular use of the harp, low woodwinds and bells, the latter to superb effect when Miles and Flora play at performing a church service prior to Sunday Mass, with lit white crosses appearing. Thirteen-year-old Benjamin P. Wenzelberg as Miles has a charismatic stage presence and a treble voice that is a marvel. Both his singing and acting imparted depth of feeling, and in the final scene he was convincing as he screamed ”Peter Quint you devil”, ran across the stage, and died in the Governess’s arms. Unlike Miles, Flora is rarely performed by a child, and this production is no exception. Soprano Lauren Worsham was wonderful, singing masterfully with both strength and subtlety, especially in the upper register, and convincingly portraying her character as a young girl.

Sara Jakubiak sang with great expression and clarity. When a letter arrives from Miles’s school stating that he has been expelled, she brilliantly rendered the Governess’s consternation both by vocal inflections and body gestures. Her aria extolling the beauty and calmness of Bly’s grounds, sung just before seeing the ghost of Quint for the first time, was alluring and lovely. In a later scene, when she debated whether to inform the children’s uncle – despite his stipulation that she never contact him – of the bleak happenings at Bly, Worsham once again displayed imaginative musical and theatrical control. Sharmay Musacchio portrayed the housekeeper, Mrs. Grose, with fine stage presence and sang powerfully and adroitly.

Dominic Armstrong, singing with lustrous assuredness, performed the ‘Prologue’, and portrayed Peter Quint as a truly malevolent presence. As Miss Jessel, Jennifer Goode Cooper’s voice was nothing short of gorgeous, as she meandered nightmarishly around the stage. Both ghosts wore white facial makeup, with Quint’s cheeks also streaked with blood. Jessel had been seduced and impregnated by Quint, then suddenly left Bly, and died mysteriously, and their mesmerizing duet at the beginning of Act Two depicts their mutual rancor and disgust. In the same duet, Jessel quotes a line from W. B. Yeats’s poem The Second Coming: “The ceremony of innocence is drowned”. In James’s novella, the ghosts are neither seen nor heard, and Yeats’s line is not mentioned, but these elements all enhance the stagecraft and add to the vocal force displayed throughout the performance. Every part of the production blended into a wonderful whole, making this a capital celebration of Benjamin Britten’s fruitful musical life.