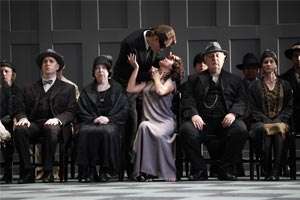 New York City Opera has returned to its home on the southern side of Lincoln Center’s main plaza. The acoustic of the newly refurbished David H. Koch Theater (formerly the New York State Theater) remains imperfect. Voices can be easily swallowed by the space, particularly when the singers are placed upstage, and the orchestra continues to lack presence. Generally, though, the sound has more oomph than it used to. Also, the seating arrangement has been made considerably more comfortable and navigable.

The really good news is that, with George Steel now at the helm, the NYCO has quickly regained a great deal of its lost luster. There’s a lot of (positive) buzz both in the press and in musical circles about the company’s revival of Hugo Weisgall’s “Esther”, and this terrific new production of “Don Giovanni” reminds one that there’s a place in this city for thoughtfully daring reinterpretations of the classics. 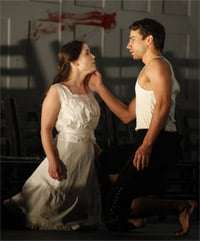 Christopher Alden’s ingenious take on Mozart’s comic-drama will surely be seen as provocative in its graphic portrayal of carnality, but it’s no sex farce. Indeed, there’s a ritualistic quality to his conception that gives it the atmosphere of Greek tragedy. This is manifest partly through highly stylized physical movement that’s rather like modern dance at times, as well as the way the chorus is used in a significant, non-singing yet expressive role throughout the opera. When, in his ‘Catalogue aria”, for instance, Leporello sings about Giovanni’s penchant for young girls, one of the female choristers draws a younger woman into a protective embrace, like a mother guarding her daughter.

Visually, the production is stark. The set is almost bare: walls of white with battleship-gray wainscoting frame the stage that’s empty except for rows of black chairs. 1930s’ institutional-style light-fixtures hang sadly from the rafters, and an imposing white-neon cross adorns one of the walls. There’s no curtain (except for a striking forest-green one that’s drawn partway across the stage for the party scene in Act One). Most of the cast is dressed in dark-colored, Depression-era clothing. Don Giovanni wears a sleek suit; Don Ottavio looks like a prim but dapper banker; Leporello is outfitted like an overgrown paper boy, complete with cap. 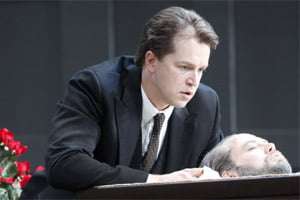 Alden has re-imagined quite a few dramatic details, and many of the additions or alterations are extremely clever. Having Elvira’s flirtatious maid, whom Giovanni seduces at the beginning of Act Two, reappear near the end to aid Leporello in serving the Don dinner (though she provides other services, too), is at once humorous and effective. Not all of the director’s changes make complete sense, however. Alden dispenses entirely with the stone statue of the Commendatore, for instance. Instead, the corpse of Donna Anna’s murdered father appears in his (open) coffin. This works fine in the graveyard scene, but in the final one, Alden has the (closed) coffin resting on Don Giovanni’s dinner table. If the Commendatore is already there, what are those ominous stomping and knocking sounds Mozart’s written into the score (and that terrify both Leporello and Donna Elvira)?

Despite such inconsistencies, however, the production is riveting – dramatically, visually, and musically, too. In fact, the singing is extremely fine, and six of the eight principals are NYCO debutantes. Stefania Dovhan (Donna Anna) has no trouble projecting to the back of the hall. Her voice cuts like a well-polished blade, yet it’s an elegant, attractive instrument, and her piano singing is exquisite. The youthful freshness of Joélle Harvey’s soprano makes her an ideal Zerlina. Her tone has a slight flutter that suggests an alluring sensuality (her ‘Vedrai carino’ was memorably delicious). Keri Alkema has previously sung Suzuki (in “Madama Butterfly”) at the NYCO, so this appearance as Donna Elvira marks her debut as a soprano. She, too, has exactly the right sound for the role: strong, agile, and crystal-clear. Her runs and arpeggios are articulate and rhythmically faultless, with spot-on intonation. Perhaps she could vary her tone a bit more (she rarely sang quietly), but the overall effect is still marvelous. 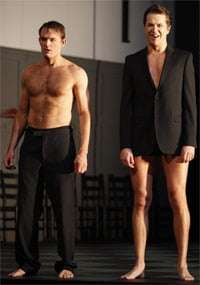 The men, as a whole, are nearly as impressive (and for all but the Leporello, this is their first time on the City Opera’s stage). Daniel Okulitch has a magnetic stage presence that makes his Don Giovanni seem at once seductive and highly dangerous. With a little more tonal robustness, he could be a world-class Giovanni. Here, at least, Olukitch’s sound seems a bit light for the part, especially as Jason Hardy (Leporello) sings with such supple, expressive firmness. Hardy makes the Don’s servant a sympathetically awkward, gangly figure, and Alden makes good use of the baritone’s gift for slapstick comedy (which includes juggling and the ability to balance a chair on his chin!).

Gregory Turay is not an especially sweet-sounding Don Ottavio. His tone can sound pinched and nasal in its upper register, but he sings with unusual sensitivity and intelligence. He shapes the challengingly long phrases of his two arias artfully, for example. Kelly Markgraf (Masetto) matches his Zerlina in terms of freshness of tone, and he’s able to dip into his lower register with minimal loss of vocal heft. Sadly, heft is what’s missing from Brian Kontes’s portrayal of the Commendatore. One wants Donna Anna’s father to convey authority, and Kontes’s tone is simply not sufficiently authoritative.

Gary Thor Wedow’s conducting makes a few notable concessions to period practice. His tempos tend to be brisk (to a fault at times, as in the masqueraders’ ravishing trio in the Act One finale), the strings are sparing in their use of vibrato (resulting in some astringent sounds), and here and there the singers ornament the da capo-equivalents of their arias. Wedow’s energetic pace works well with this show, as it counterbalances the somewhat studied nature of Alden’s theatrical concept. On the other hand, there are several sections (like ‘Vedrai carino’) where greater warmth and musical affection from the pit would likely enhance the drama.

In sum, this “Don Giovanni” offers so much food for thought – as well as delight – I intend to see it again.