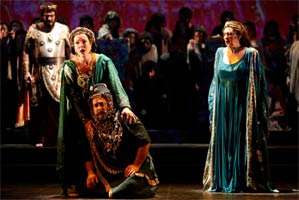 Of New York City Opera’s twenty-nine world premieres, three were written by Hugo Weisgall, including this, his tenth and final opera, which premiered in 1993. For the current run, director, set designer, and costume designer are the same as for that premiere. “Esther” was to appear again at NYCO in 1997 but was dropped for financial and technical reasons. Fortunately it is back in the newly renovated David H. Koch Theater, with the stupendous Lauren Flanigan reprising the title role.

Both the grimness and the triumphalism of the opera’s subject-matter were immediately conveyed. After a few bars of harsh, discordant music, the curtain rose onto a macabre scene: Haman and his ten sons hanging from the gallows (the figures in silhouette) with the Gravedigger plying his trade below the bodies and with a figure approaching dressed in a cowl-like garment. The Gravedigger asked, “Who are you?” and the next scene began before there was an answer. The opera ended with the same scene and with the simple but powerful answer: “I am Esther!” This true story of the Jewish teenager in Persia who became the Queen and saved her people from the demonic clutches of the King’s Prime Minister is certainly an inspiring one – ripe material for a composer to tackle.

The simplicity of the scenery and the staging – though not minimalist by any means – lets the action develop at an even pace without overwhelming it. Throughout the opera, images of the historical Xerxes were projected on hanging diaphanous screens; shortly after the beginning of Act Three, a photo of a huge stone wall that brought to mind the Western Wall, Judaism’s holiest site, filled the stage while later on in the act a part of the Megillah, the scroll in Hebrew telling the story of Esther that is read on the Jewish holiday of Purim, covered a large hanging mantle. At times, the hanging screens flitted up and down and opened like the diaphragm of a camera lens – a very clever and singular use of the screens. All the imagery, both symbolic and real, was altogether effective. 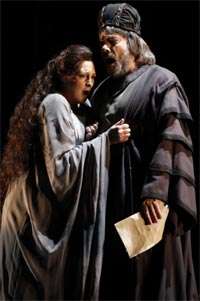 The lighting was both dynamic and restrained, with Esther often bathed in effusive light while the illumination on the chorus of Jews was basically subdued. The costuming was historical in nature, but there was an anomaly: in the opera’s one dance scene in Act Three, the male dancers seemed to be fitted-out more in Ancient Egyptian garb than Persian.

For lesser singers, the music would have been quite intimidating. Esther’s music is mostly sung in the upper register and full of fortissimos along with lyrical, frequently liquid lines. As Esther, the physicality of Lauren Flanigan’s singing and acting dominated the stage, but luckily the performers around her also showed matching verve and dynamism.

As Haman, Roy Cornelius Smith certainly held his own, with his powerful, expressive, soaring voice eliciting evil. Stephen Kechulius (Xerxes) kept just the right demeanor and vocal bearing to convincingly depict his dual role of King of Persia and husband of Esther, for whom he would do anything, including saving her people (by letting them arm themselves to fight for their survival) and hanging Haman and his ten sons (by Esther’s request).

James Maddalena (Mordecai) interacted magnificently with Flanigan in a number of vocal moments, his commanding voice cutting through the tension of imminent death for the Jewish people while leading Esther in the direction of becoming the savior of her people. Margaret Thompson (Zeresh) laudably produced the necessary starts and stops, angular denunciations, and insinuating melodies. 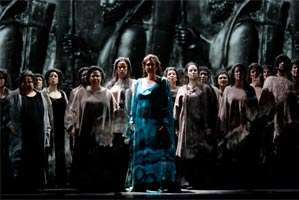 Beth Clayton (Vashti) used her finely etched voice to persuasively bring forth the hatred she felt toward her husband, the King, for having deposed her, even to the point of planning to poison him (but Mordecai uncovered the plot and notified him). Gerald Thompson (Hegai) had a fluid vocal style, although he wobbled a bit on the highest notes; yet his sprightly acting made up for his few vocal lapses.

The rest of the singers performed admirably, Robert Mack (Servant and Reader) filling in for an indisposed Matthew Surapine. The chorus did a peerless job representing the voices of the people entreating Esther to act to save her people from impending doom. The children’s chorus was terrific in mocking Xerxes’s two chamberlains who were condemned to be hanged for plotting to poison him.

George Manahan held together the difficult orchestral music, which is full of acidic melancholy, muscular dissonance and uncompromising modernism (Weisgall made no attempt to adapt Persian or Hebrew music to the score) but which for a late-twentieth-century opera still has many of the conventions of tradition such as arias, duets, trios, quartets, and recitatives.. The orchestra credibly rendered Esther’s feelings at her victory in an aria mourning the many dead. In the strong, sensuous love-duets between Esther and Xerxes, in a quartet welcoming death in which time seemed suspended, and in finely etched arias for each of the main figures, the orchestra, and particularly the woodwinds and brass, demonstrated its artistic merits. Final kudos must go to the Diction Coach, Jennifer Ringo: the clarity of words was so wonderfully in evidence that I rarely had to look at the Supertitles.