Donizetti
L’elisir d’amore – Melodramma giocoso in two acts to a libretto by Felice Romani after Eugène Scribe’s text for Daniel-François-Esprit Auber’s Le Philtre, in turn after Silvio Malaperta’s Il filtro [sung in Italian with English supertitles by A. Scott Parry] 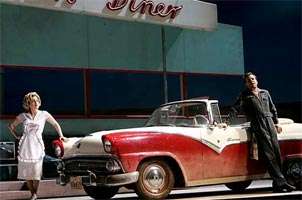 Sometimes a radically different production of a much beloved, frequently performed opera really works. New York City Opera’s 2006 Jonathan Miller production of Donizetti’s “The Elixir of Love” successfully transplants this 1832 opera from the pastoral setting of a small rural European village to the 1950s American Southwest, where the action takes place in and around Adina’s Diner.

The revolving stage is set with gasoline pumps (at 33 cents a gallon!), a Coca-Cola vending machine, and a few motorcycles. The costumes feature overalls, jeans and leather motorcycle jackets for the men, and bobby-soxer garb for the women. Nemorino is a gas-station attendant, Adina owns the diner in which Giannetta is a waitress, and Belcore is a GI Sergeant. Dulcamara remains a mountebank, but one who drives into town in a long red-and-white automobile rather than the more traditional hot-air balloon or horse-drawn wagon. What Miller’s production fortunately has not changed is the genuine pathos that keeps this comedy from seeming merely heartless and cruel, and the essence of the characters’ personalities – the reliable coquettishness of both Adina and Giannetta, Belcore’s braggadocio, Dulcamara’s smarminess, and, of course, the winsome gaucheness of Nemorino. The music is as delightful and ebullient as ever, with exquisite singing. 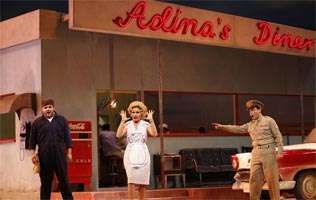 David Lomelí’s silky lyric-tenor voice effortlessly conveyed Nemorino’s feeling that “he himself could die of love” in the melancholy romanza ‘Una furtiva lagrima’. His introductory cavatina, ‘Quanto è bella’, in which Nemorino muses on Adina’s beauty, was touchingly sung, and Lomelí pulled off superbly the tender minor-major sequence in the concertato, ‘Adina, credimi’, in which Nemorino begs Adina to wait one more day (to let the elixir take effect) before marrying Belcore. Lomelí, making his City Opera debut, is definitely an up-and-coming performer. 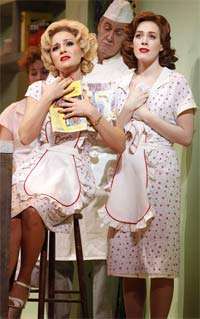 Stefania Dovhan’s crystal-clear, ringing top notes and lustrous lower ones combined to express Adina’s conflicted feelings toward Nemorino. At first she brushed him off, reading the story of Tristan and Isolde in a comic-book as she sang her cavatina ‘Della crudele Isotta’ with all the mirth that it was intended to engender. Adina finally expresses her love for Nemorino as she frees him from the army enlistment that Belcore had tricked him into for the money (‘Venti scudi’) he needed to buy more elixir. Dovhan’s handling of the suave and highly figured melody in her cantabile ‘Prendi, per me sei libero’ contrasts with Adina’s more brittle music earlier in the opera, when she was callous toward Nemorino. 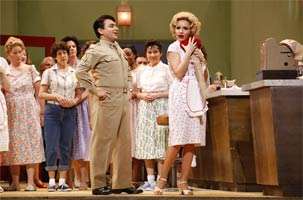 Marco Nisticò gave an admirable interpretation of Dulcamara’s buffo disposition with singing and acting of the highest caliber. Dulcamara’s song to the villagers, ‘Udite, udite, o rustici’, is one of opera’s great arias, a torrent of patter set to a series of unctuous melodies that characterize this irresistible fraud who wants nothing more than to peddle his nostrums to the gullible village folk. Nisticò’s breathless performance was a splendid piece of comic singing.

As Belcore, José Adán Pérez strutted about the stage like a peacock courting a peahen. His vocal arrival was the cavatina ‘Come Paride vezzoso’, in which he likens his presenting Adina with a nosegay to Paris awarding the golden apple to Aphrodite. This was sung with panache and beauty of voice, as was the rest of his performance. Meredith Lustig’s singing as Giannetta was well conceived and appealingly etched.

The opera is replete with pleasing ensembles, all of which were splendidly sung. The most famous duet is Adina and Dulcamara’s ‘Io son ricco, e tu sei bella’, sung at Adina and Belcore’s pre-wedding celebration to the cheers of the villagers. (This is a musical joke – a barcarolle in 2/4 meter instead of the characteristic 6/8.) Also superbly sung was Adina and Nemorino’s ‘Chiedi all’aura lusinghiera’, in which Adina says that she is fickle as the changing breeze, but Nemorino replies that he is compelled to love her just as a river must flow to the sea. In the clever, grandly sung Quartet ‘Dell’elisir mirabile’, Nemorino, Adina, Belcore and Dulcamara were joined by the women of the village in what seemed like a comic equivalent of Parsifal amid the Flower-maidens. It vividly set off the varied responses of the characters, yet fused them into a propulsive ensemble.

The mostly-female chorus sang commendably and was hilarious, sashaying and jitterbugging. These performers were a force to be reckoned with, as evidenced in the witty scene where the village women discover that Nemorino has inherited great wealth from his departed uncle. Their preening and sudden interest in Nemorino was highly entertaining, as was the clueless Nemorino, unaware of his inheritance and thus convinced that it was the elixir doing its job. Brad Cohen’s conducting of the sparkling tunes and emotional melodies of Donizetti’s score, although a bit too frenzied early on, was well thought out and evenly rendered. The orchestra performed adroitly and with color and expression, as in the alluringly inflected minor-major melody of the bassoon obbligato introducing ‘Una furtiva lagrima’. Just as there is no weak number in the opera, this production succeeds at all levels. I hope it will be part of City Opera’s repertory for years to come.