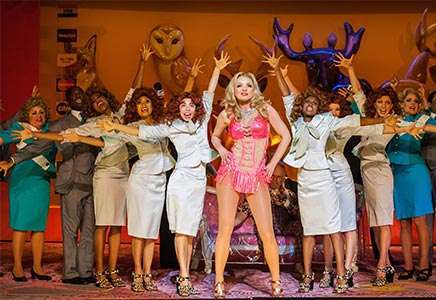 Mark-Anthony Turnage’s Anna Nicole was commissioned by the Royal Opera House, London and premiered there on 17 February 2011. Turnage and librettist Richard Thomas (best known for Jerry Springer: The Opera) give a singular spin to a familiar tale of a small-town girl who leaves her hermetically-sealed existence to make it big in the outside world – in this case, Houston, Texas. Anna Nicole Smith (who was born Vickie Lynn Hogan) became Playboy’s “Playmate of the Year” in 1993. When she was 26 she married an octogenarian oil mogul, J. Howard Marshall II. Her sudden success had terrible pitfalls, leading to a deadly denouement. To catch Marshall in wedlock, Smith had her breasts excessively enlarged with silicone implants, causing years of debilitating lower-back pain. She became addicted to painkillers and died from a drug overdose at the age of 39. The opera opens with Anna sitting on a golden throne, reveling at being surrounded by a multitude of reporters, peppering her with questions about her life. Following this scene are flashbacks to vignettes of Anna Nicole’s life. 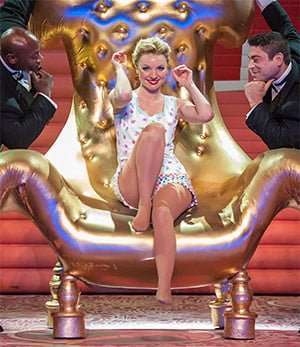 An amusing moment came early in the opera when the pronunciation of Anna’s hometown, Mexia, was up in the air. We are told it is pronounced “Mu-HAY-ah,” but no-one knows for sure, so the town’s motto is: “A great place no matter how you pronounce it”. Ben Davis sang agreeably as Anna’s first husband, whom she met at a fried chicken joint, their duet a tour de force of vocal histrionics. These bits of levity were welcome in an evening of tragicomedy, where the ‘f-word’ is thrown about many times. I’m no prude, but it did get rather tiring.

Sarah Joy Miller was quite convincing in her portrayal of Anna Nicole. To flee the world of menial labor and pittance pay at a Wal-Mart, Anna embarks on a new life choice: the world of the ‘Gentlemen’s Club’, where the lap dancers, in a wittily sung discourse on the virtues of their profession, convince Anna that it is the way to entice a rich man to marry her. Miller admirably depicted Anna’s great consternation at the realization that her breasts weren’t up to the job with her rising and falling vocal line, with sudden bursts of clarion sound and pianissimo plaintiveness.

The staging of Anna’s remarkable transformation from thin and winsome to busty and then obese, with shrillness added to the childlike personality she carried around with her till her death, is pure genius. Miller’s singing reflected these changes, going from high and often impetuous before the ‘boob job’ to a more nuanced vocal approach to life afterward. In order to win over Marshall, Anna, her back to the audience, performs fellatio on him while encircled by a host of shocked reporters. This remarkable scene reminds of similar moment in Thomas Adès’s opera Powder Her Face. Miller was always the commanding presence, her acting and singing adroitly conveying every nuance of Anna Nicole’s physical and emotional suffering. 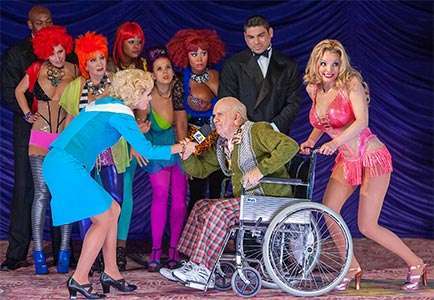 At the end of Act One, Anna and Marshall marry, with both of them standing on top of what looks like a gigantic wedding cake. Poor Marshall had to be hoisted up, but once next to Anna he was beaming. Robert Brubaker used his light but colorful voice to wonderful effect while staggering and swaying around the stage. He responds to Anna’s constant badgering of him to give her a ranch with a great comic line: “There ain’t no such thing as a free ranch.” At the beginning of Act Two, I could almost feel the pain in Anna’s lower back as she was getting up from the gargantuan mattress on which she and her husband were lying.

Perhaps the oddest aspect of the evening was the opera’s three death scenes: Marshall’s, Daniel’s, and Anna’s. Instead of reacting to them in a poignant way, I felt little of anything, owing to their staging and how quickly the deaths occurred. I knew they were coming, but was not prepared for their suddenness. Emotion seemed to be lacking in these scenes; one moment alive, the next dead; sort of ho-hum. Even the music, which is original and catchy throughout, couldn’t salvage those scenes. In Act Two, Marshall almost dies at a wild party thrown by Anna, but he says, delightfully, “not dead yet”. In the next scene he is. And when the love of Anna’s life, her son Daniel from her first marriage, dies of a drug overdose at the age of 20, his only singing moment comes after his body has been placed in a bag. Suddenly he rears his head and for a litany about the powerful drugs he has taken over the years. Nicholas Barasch brought sang-froid to this, his voice never modulating – the confession of a newly-departed soul to the evil he had done to himself and to the grief he had inflicted on his beloved mother.

There were so many disingenuous people in Anna’s life! Even Marshall, who just wanted to “get laid”. He didn’t leave a will, and his family saw to it that Anna got nothing from his estate, keeping her in litigious limbo for over ten years until her death. When Marshall’s family appears after his funeral, they loom as macabre figures all-in-black singing to Anna in threatening tones. A bittersweet moment is when Shelley, Anna’s cousin, sung by Elizabeth Pojanowski, laments the fact that now Anna won’t be able to pay for dental work on her awful set of teeth; Shelley has lost quite a few of them. The opera is a mezzo-soprano’s Arcadia, with ten parts written for this voice type. Virgie, Anna Nicole’s excitable mother, is the most prominent of these. Susan Bickley sang with raw emotion, her voice admirably conveying anger and bitchiness, especially toward her husband – and later, toward Anna’s marriage to a man of biblical age. Miller dramatically lets us know that Anna saw her mother as her only real parent, though one with many faults, and that she regarded her loutish, pusillanimous father as nothing but a menace. James Barbour, a well-known Broadway actor, gave a fine performance as the rifle-toting drunkard, Daddy Hogan. Rod Gilfry as Stern, Anna’s lawyer, sometime-lover and doubtful father of Anna’s daughter, played up his smarmy character to the hilt. His masterful uninflected singing demonstrated the coldness and cunning of Stern’s personality. As plastic surgeon Dr. Yes touted the positive effects of breast enhancement while ignoring its well-known downsides. Richard Troxell’s voice had just the right edge to convey that he didn’t really care about Anna, but only about how much she would pay. John Easterlin, as Larry King, sang with enough deceit in his voice to let us know that his sole concern was about the ratings his interview with Anna would garner.

The music throughout is a fresh mix of jazz, Broadway and operatic elements. Steven Sloane conducted brilliantly, never reining-in musicians and letting the score dynamically depict the inner workings of Anna’s life and all the personages in it, even including the licentious, crotch-grabbing (his own) Trucker, sassily sung by Stephen Wallem. Costumes and lighting were very effective and imaginative.

Here’s hoping that Anna Nicole, with its fine production, exceptional cast, and marvelous music, will help salvage New York City Opera’s season, although it sadly appears that the company is on the verge of bankruptcy.