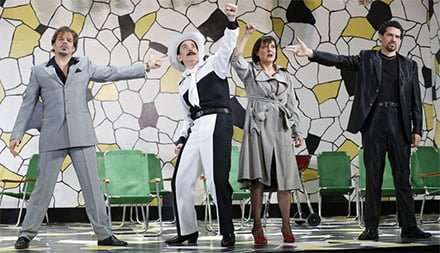 The peripatetic New York City Opera has returned to its original home at New York City Center, where it performed from 1944 until its move to Lincoln Center in 1965, for two new productions: Rossini’s Moses in Egypt, and La Périchole. Offenbach’s operetta is loosely based on the life of Micaella Villegas (La Périchole), an acclaimed 18th-century Peruvian performer who became renowned as the mistress of the Viceroy of Peru (here Don Andrès de Ribeira). The plot is centered on Périchole (a pejorative term from French into Spanish akin in meaning to a half-breed she-dog) and Piquillo, lovers and destitute street performers. Its convolutions lead to their being married without either of the tipsy pair being aware of the identity of their spouse. Much of the action involves Périchole’s efforts, ultimately successful, to resist the Viceroy’s lecherous advances. 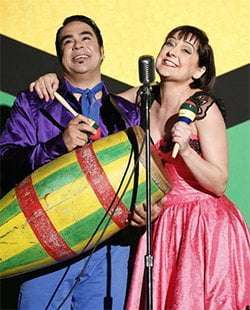 Paul Steinberg’s set-design featured a backdrop of kaleidoscopic images and hanging piñatas in the shape of llamas, and Gabriel Berry’s costumes contrasted rich-hued outfits with dull, dark ones – the latter worn by the gossipy, malicious ladies of the court and by the Viceroy’s men. However, Christopher Alden’s florid and energizing production was played much too farcically, with painfully non-stop slapstick, especially by the Viceroy, often leaving me impatient for the delightful music to return. Some aspects of the production were wonderfully innovative, however, particularly the way it set the mood even before the house lights dimmed by having the members of the chorus enter in front of the curtain and get drinks from a bartender so that when, after a catchy Overture, the curtain rose, the chorus became part of a large gathering celebrating the Viceroy’s birthday. The staging included quite effective use of video. In Act Three, Piquillo is beaten by two of the Viceroy’s henchmen, tied to a chair and forced to watch a live TV feed of the Viceroy trying to bed Périchole, who finally beats him with a baseball bat and escapes.

Fortunately, the excessive silliness of the production – in which alcohol, smoking, disguises, and sexually-charged innuendos and proclivities were prevalent – did not mar the singing and playing. The score is replete with exquisite finales and charming Spanish motifs such as boleros and seguidillas. Emmanuel Plasson (son of Michel) conducted brilliantly, never letting the orchestra overwhelm the singers. He gave free rein to the frequent enchanting flute and clarinet passages, and the strings vibrated with thrilling luminosity. 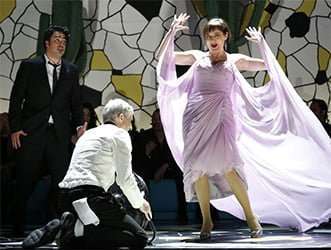 As Périchole, Marie Lenormand was stupendous, her clarion voice resonating with emotional intensity and with boisterous comedic gestures marvelously rendered. Périchole’s ‘Letter Song’ was touching, and ‘Ah! quel dîner’ had just the right amount of swagger. Her aria of insults toward Piquillo was defiantly and powerfully sung while standing under a wall-mounted stuffed shark, and her final appeal to the Viceroy’s better nature, ‘La Clemence d’Auguste’, was charming. Philippe Talbot was stellar as Piquillo, his fervid lyricism matched by dynamic and mirthful acting, bemoaning the character’s fate and bumbling nature with comedy and sadness. He sung with hearty charm and excelled in duets and trios.

Kevin Burdette’s portrayal of the Viceroy as a lecherous buffoon was downright daft, but his voice was luminous as he frolicked about the stage in a Batman-type outfit, and his many other musical moments were also splendid. His exaggerated clowning was equally perverse in Act Three, where the Viceroy, disguised as a jailer dressed in a sort of black and white cowboy outfit, made low guttural groaning and moaning sounds into a microphone before announcing his true identity.

Lauren Worsham, Naomi O’Connell, and Carin Gilfry were captivating in two trios, accompanying their ‘We are three cousins’ with bump and grind movements. The rest of the cast were also admirable despite the inanity of some of their acting. Philip Littell was delightful in a spoken role, his wildly histrionic facial and bodily movements wondrously acting out the plight of an old prisoner who spends twelve years digging through a prison wall with a small knife, only to arrive at another cell. Another amusingly effective moment was when the Viceroy condemns Piquillo to the “Prison for Recalcitrant Husbands”, while he and the superb chorus, through distorted hand and arm movements and tremulous singing, overemphasized the syllables of “Recalcitrant”.