Schwartz
Séance on a Wet Afternoon – psychological drama in two acts to a libretto by the composer after the novel by Mark McShane and the screenplay by Brian Forbes, with orchestrations by the composer and William David Brohn [sung in English with English supertitles by Isabel Martin] 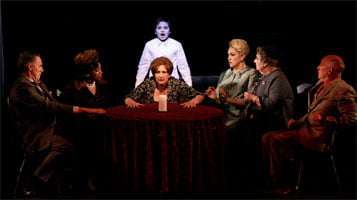 People who believe that opera is less accessible than musical theater should see New York City Opera’s production of “Séance on a Wet Afternoon”, in which Stephen Schwartz makes the leap from writing very successful Broadway musicals (“Godspell”, “Pippin”, and “Wicked”) to composing his first opera. The occult has been highly conducive to operatic treatment, with Britten’s “The Turn of the Screw” and Menotti’s “The Medium” as prime examples. Schwartz has adapted Mark McShane’s novel and Bryan Forbes’s 1964 film.

This is a psychological thriller about a medium, Myra Foster, her doting and henpecked husband Bill, and the spirit of their deceased eleven-year-old son, Arthur, who speaks to Myra and is her séance-contact. Myra feels that her gifts merit recognition, so she hatches a plan and draws her husband into it. They plan to kidnap Adriana Clayton, the daughter of wealthy industrialist Charles Clayton, keep Adriana safe while a media frenzy builds, and then have Myra announce a ‘vision’ leading to the successful recovery of the girl and the $50,000 ransom. But things go terribly awry leading to a tragic dénouement. 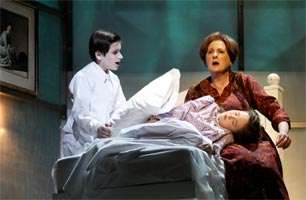 Various elements of the plot almost seem to write themselves, such as a seer’s trance and the keening of a grieving mother (as in Vaughan Williams’s “Riders to the Sea”). A deceased loved one can be readily evoked in a recurring motif; Arthur’s is based on the lovely faux-Scottish “My Faraway Laddie” played on a gramophone. Although Schwartz is not breaking new ground, his assured, evocative melodies are worthy of the tradition in which he is working. Some of the extended arias seem almost too operatic, while others are indistinguishable from stand-alone songs. All in all, they are quite effective, with many gorgeous passages. Each offers an oasis of melody and meaning, such as when Lauren Flanigan chillingly explains how ‘One Little Lie’ will reveal Myra’s truth, and Kim Josephson as Bill schools us in what Myra was like ‘When I First Knew Her’. The singing and acting were topnotch. Flanigan used her superb singing and acting skills wonderfully, her powerful, lustrous voice persuasively resonating. Myra’s solos included ‘Lucky’, ’Brightness Falls’, in which a positive slant to life not demonstrated before is evoked, and ‘Before You’, a new aria added for the NYCO production (the world premiere was at Opera Santa Barbara in 2009). Josephson put his fluid, attractive voice to good use, particularly in ‘You Didn’t Know Her’, which Bill sings to Adriana, and in the ‘One Little Lie’ duet with Myra. The pathos he carried in his voice and facial expressions were startling. Michael Kepler Meo’s ghostly male-soprano voice was truly creepy, and with Arthur’s sudden specter-like appearances, really brought out the psychological-thriller foundation of the opera.

Melody Moore sang with admirable depth and passion, her top notes effortlessly ringing out in ‘Wondrous Things’, in which Rita both laments the abduction of her daughter and what life will be like once the child is returned safe and sound. Todd Wilander showed off his vocal prowess in the duet in which Charles and Rita sing of their daughter. Bailey Grey’s soprano was quite pleasing and made Adriana an endearing character. The rest of the cast also performed admirably, especially in the séance scenes, with Philip Boykin’s husky bass-baritone voice standing out. The chorus, appearing as reporters and news photographers, sang with certitude and vigor.

Heidi Ettinger’s sets are outstanding and seem to have eerie lives of their own. The fabulous, rotating, multilevel representation of the Foster dwelling is efficiently used. Made of filmy transparent materials emanating a ghost-like quality, it contrasts with the spruce Clayton living-room. Constant rain surrounds the diaphanous structures of the set, while David Lander’s lighting exploits the normal and paranormal, picking out the surrounding floor-to-ceiling silver-beaded curtains that simultaneously evoke a gypsy’s doorway and the shimmering, saddening rainfall. George Manahan’s conducting was well paced, with high-caliber orchestral playing, the asymmetry and dissonance of some of the music splendidly rendered.