Adès
Powder Her Face, Op.14 – Chamber opera in two acts to a libretto by Philip Hensher [Sung in English with English supertitles by Kelley Rourke] 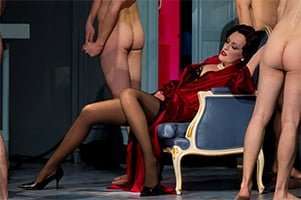 Thomas Adès’s Powder Her Face (first staged in 1995) tells the story of the lurid divorce proceedings brought by Ian Douglas Campbell, Eleventh Duke of Argyll, against his third wife, Margaret, Duchess of Argyll. The year was 1963. This performance was the second of four.

Adès’s music for Powder Her Face is an eclectic mix, often embracing popular styles. Jonathan Stockhammer conducted the complex score with brio and subtlety, and the musicians more than held their own with the intricacies and sometimes strange sounds, not least the aural hints at the Duchess’s insanity during the trial, and accordion flourishes that are not confined to the tango music. Philip Hensher’s libretto vibrates with emotions ranging from lust to arrogance to pity, reflecting humanity’s foibles and desires. 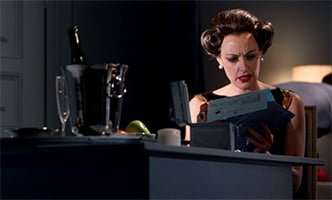 Some eight years before she wed Campbell, Margaret Sweeny (she was married to American amateur golfer Charles Sweeny), after recovering from a near-fatal fall, developed an insatiable sexual appetite (although she had had many such escapades before the accident), and allegedly had some 88 illicit encounters while married to the Duke). In one of the most arresting aspects of the production, these liaisons are symbolized by twenty-four naked men, entering slowly at first, and becoming a raging torrent. There is nothing lewd, or even sensual, for the men have no contact with the Duchess but watch a live video feed of the Duke bedding the Duchess’s Maid. Equally explicit is the depiction of photographs of intimate conduct that figured prominently in the divorce proceedings, one of which is that of the so-called “headless man” (his face is obscured in the photo) upon whom the Duchess is performing fellatio, the act being quite strikingly portrayed, both physically and musically.

The formidable role of the Duchess demands highly emotive singing and peerless acting. Allison Cook did so evocatively, with grace, pathos, equanimity, pain, and even beauty. Cook’s Duchess is the epitome of a fallen woman striving to regain respect. 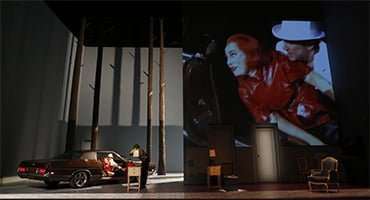 The other singers, all in multiple roles, were also splendid. Nili Riemer performed with vitality and richness of sound, as well as impressive physical shenanigans as the Duchess’s Maid as she contentedly (and symbolically) jumped up and down on a bed for many minutes with neither misstep nor apparent fatigue. Tenor William Ferguson sang masterfully with an appealingly sweet and euphonious voice, even in the Electrician’s most biting comments about the Duchess. His acting was natural and direct. As the Judge, Matt Boehler’s voice and demeanor were downright frightening, bursting with the demonic force of a man possessed by acute disgust at the Duchess’s dalliances. It is rare to hear a bass with Boehler’s uncanny ability to reach and sustain the very lowest notes with clarity, heft and delicacy. In non-singing roles, Jon Morris, Kaneza Schall and Chelsey Blackmon made their presence felt and were vital cogs in keeping the opera flowing.

Jay Scheib’s stage direction is stylish and Marsha Ginsberg’s sets functional, with beds figuring prominently and rolled about easily and with organized abandon. One confusing element, however, was the illogical use of trees set around the stage, with some even placed near the beds. Alba Clemente’s effective costumes are of the kind that can be easily torn off.

Although Powder Her Face may not be to everyone’s liking, I hope that this production will continue to shine. As New York City Opera continues its nomadic peregrinations since leaving Lincoln Center, it has found a wonderful venue at Brooklyn Academy of Music.