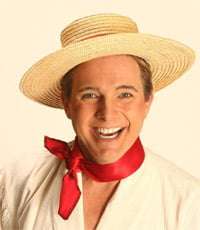 One of the finest and most popular of all the Savoy Operas, “The Gondoliers” enjoyed an initial run of 559 performances, from its premiere at the Savoy Theatre (London) on 7 December 1889 to 20 June 1891. It contains some of Sullivan’s freshest and most delightful music, married to a brilliant text by Gilbert which satirizes republican principles. The plot treads some old ground, notably baby-swapping and the revelation of a secret at the end, but the satire on ultra-democratic sentiments (with the implication of hypocrisy thrown in) marked a subtly fresh turn of the Gilbertian knife. Sullivan rose to the opportunity to impart first an Italian, then a Spanish flavour.

The former becomes obvious, not only in the Venetian setting of Act One, but also when, in the same act, Marco and Giuseppe, with a chorus of girls, sing in Italian – the only part of a Gilbert & Sullivan operetta in a foreign language. In the Act Two ‘Dance a Cachucha’, the Spanish character of the operetta marvellously manifests itself. Overall, Sullivan’s score is varied and masterful, with many moments of dance music, such as in the waltz tunes of the opening sequence – virtually 20 minutes of non-stop music (the longest such period in any G & S operetta without dialogue) – and in the Act Two gavotte, ‘I am a courtier’.

The overture is full of whimsy and atmosphere that was wonderfully captured here by the woodwind section, in particular, of the 25 or so members of the orchestra. The curtain came up on simple but effective scenery – the Piazzetta, Venice, with an almost silhouetted hanging cut-out of St Mark’s Square in the background. The effectiveness of the costuming was immediately apparent, the contadine and the gondoliers wearing colourful, believable outfits. The Inquisitor’s costume (with a long, curly black wig), though, was more a Louis XIV look-alike than that of a Spanish Inquisitor. But then perhaps that was part of the satire. The lighting was effective, highlighting the various hues of the costumes and the assorted vaudevillian facial expressions of the Duchess. The bright lighting of the Act Two location, the Pavilion in the Palace of Barataria (Barataria being a mythical place actually mentioned in Cervantes’s “Don Quixote”) appropriately added to the hilarity of the plot by conspicuously emphasizing such a ludicrous location.

That plot revolves around discovering who the real king is – Giuseppe or Marco. One had been abducted when a babe in Barataria by the Inquisitor to save him from the spread of Methodism and entrusted to the care of a Venetian gondolier who over the years grew unable to say who was the prince and who his own son. When the operetta opens, they are both gondoliers who, by peeking during a game of Blindman’s Bluff, pick their wives Gianetta and Tessa. Casilda was promised in marriage to the prince when both were babies. She is now in Venice with her parents, the Duke and Duchess, to marry the prince. She has no idea she is bethrothed to him and is in love with Luiz, the Duke’s Attendant. The outcome is that Inez, the King’s Foster-Mother, indicates that Luiz, not Giuseppe or Marco, is the rightful king and Casilda will join him as his Queen. All ends on a joyous note with everyone singing ‘We leave you with feelings of pleasure’.

The singing throughout was steady and penetrating, the voices delineated enough to know – even, I imagine, with one’s eyes closed in contemplative harmony – who was singing at any one moment. In particular, the mellifluous voice of Colm Fitzmaurice filled the air with hope and contentment, though with occasional pathos, as when he thought he might be the king and would have to give up his wife Gianetta. Marco’s well-known song in Act Two, ‘Take a pair of sparkling eyes’, almost had a vein of tenor balladry to it. Angela Smith had her voice and acting working in hilarious unison. The patter songs ‘In Enterprise of Martial Kind’ and ‘Rising Early’ were handled with agility and finesse. Stephen Quint, Richard Alan Holmes, Michele McConnell, Laurelyn Watson Chase and Erika Person sang their roles with aplomb. Albert Bergeret conducted with passion, energy and hyperbolic emotion while somehow never overwhelming the parodies and satires that were superbly played out.