Gilbert & Sullivan
The Mikado, or The Town of Titipu – Comic Opera in Two Acts [libretto by W. S. Gilbert with music by Sir Arthur Sullivan] 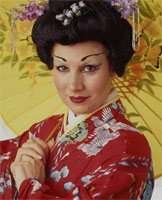 Under the artistic and music direction of Albert Bergeret, the New York Gilbert & Sullivan Players is offering four Savoyard operas in the company’s first-ever summer season at New York’s venerable City Center. For the two-week long “G & S Fest” the troupe is performing the “big three” Gilbert & Sullivan works on which it bases its seasons – “H.M.S. Pinafore”, “The Pirates of Penzance” and “The Mikado” – along with the more rarely performed “The Gondoliers”.

Founded by Albert Bergeret in 1974, NYGASP is America’s premier Gilbert & Sullivan ensemble and has given more than 2,000 performances around the United States and Canada. Bergeret’s stated mission is to bring “quality performances of the Gilbert & Sullivan masterpieces to as wide an audience as possible”. To this end, the company offers musically stylish, broadly comic, but essentially tame productions of thirteen G & S operettas, which enjoy large, enthusiastic and loyal audiences spanning grandparents, parents and children. No high concept productions or vaguely suggestive sets are on offer. These are traditional productions with lots of slapstick humor and plenty of visual pop.

There was no doubt that this audience enjoyed the company’s colorful and energetic performance of “The Mikado”, the most popular work in the Savoyard canon. The performance had much to commend it: Gail J. Wofford and Kayko Nakamura’s vibrantly colorful costumes, Bergeret’s attractively-built sets, an engaging cast, and the nimble playing of the 25-member orchestra.

As anyone familiar with “The Mikado” knows, the work is full of lists, such as Ko-Ko’s ‘I have a Little List’ song, Pooh-Bah’s list of titles, and the Mikado’s list of punishments and crimes. To more directly appeal to modern or non-UK audiences, these lists are often altered to include more contemporary, topical references, the challenge being to find the right balance between the traditional and the topical. In this performance the balance seemed just right. Ko-Ko’s list of those who would not be missed was expanded to include local, up-to-the-minute news-headliners such as the two attention-seeking individuals who had scaled the New York Times Building on the day before the performance. The Mikado’s song about letting “the punishment fit the crime” included harsh penalties for ‘Client Number Nine’ (the New York Governor who recently resigned after being caught in a federal wiretap arranging to meet with a high-priced ‘escort’). The verses of the ‘Mi-Ya Sa-Ma’ chorus used the names of Japanese electronics firms and motorcycle manufacturers in place of Gilbert’s nonsense syllables. Pooh-Bah’s list of titles was kept largely the same, but had the singular, highly effective addition of “Director of Homeland Security”.

The singers all provided dramatically solid and vocally pleasing performances. In the lead role of Ko-Ko, David Macaluso was broadly comic and vocally pleasing. As a roly-poly, garishly made-up Pooh-Ba, Louis Dall’Ava performed some hilarious physical bits. As Nanki-Poo, Daniel Lockwood served the music well, as did Laurelyn Watson Chase in the role of Yum-Yum. David Wannen made a handsome and vocally stylish Mikado, and Dianna Dollman was an appropriately imperious Katisha. Bergeret elicited splendid playing from his orchestra. Sullivan’s delightful music continually moved forward with energy, lyricism and fine attention to detail in a performance that conveyed the whole company’s fondness for the work.