The Sorcerer – comic opera in two acts with music by Arthur Sullivan and libretto by W. S. Gilbert 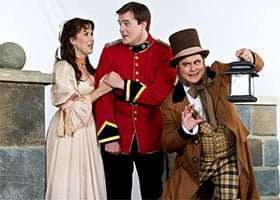 The New York Gilbert & Sullivan Players has amassed an impressive following in New York for its special genre. Albert Bergeret is the company’s founder, artistic director and general manager, and has performed the entire canon of G&S operettas over forty years. The Gerald W. Lynch Theater’s moderate size suits the company perfectly, allowing even singers with modest dynamic range to be heard over the orchestra.

The Sorcerer premiered in London in 1877 and cemented the collaboration between Gilbert and Sullivan that was to last for more than twenty years and proffer much “innocent merriment” to audiences. Its plot, based upon Gilbert’s tale An Elixir of Love, is one of many examples of his poking fun at high-minded idealism. The story centers on the engagement of Alexis and Aline, both born to parents of lineage, his father, Sir Marmaduke Pointdextre, a baronet and her mother, Lady Sangazure, a woman of prominence – and Marmaduke’s first love. Alexis believes that love is the answer to all problems and that true love should not be subjected to the prejudices of social class, so he devises a scheme to foist this principle on the entire village. He retains John Wellington Wells, a “family sorcerer”, to conjure a potion to be administered to the townspeople at the fete celebrating Alexis and Aline’s betrothal. The elixir only works on those not yet mated; making them fancy the first person of the opposite sex they come across and which generates disastrous confusion. 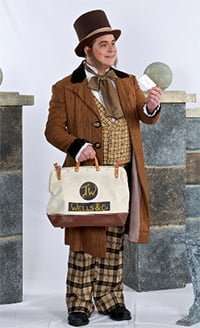 Aline drinks the potion to ensure her eternal love for Alexis, but awakens to the sight of Doctor Daly, the village vicar, and rejects her fiancé. Wells acknowledges that the potion has caused excessive mischief and offers a dire solution: either he (the provider) or Alexis (the purchaser) must give his life to undo the spell. They leave the decision to the townspeople, they, not surprisingly, choose the sorcerer. Rather sanguinely, Wells accepts the decision and goes up in a puff of smoke, returning for a moment because he forgot his hat! The spell is broken, the misallied couples are once again properly matched, and the story concludes joyously with a moral warning against trying to fool Mother Nature.

After a crisp, buoyant Overture, tarnished by imprecision and intonation problems in the violins, the curtain opened to a quite traditional set and period costumes, all of which wisely avoided visual gimmickry. Kimilee Bryant sang the role of Aline with a strong, secure soprano, splendidly rendering ‘Alexis! Doubt me not, my loved one’ with operatic intensity. Daniel Greenwood, as her Dudley Do-Right lover Alexis, gave a forthright and expressive performance. Both individually and together they sang with ardent expression, clear diction and an amusing sangfroid.

The star of the show was the Sorcerer, John Wellington Wells, performed with sly, if rather matter-of-fact expression by Stephen O’Brien. Forsaking the usual dark costume that would have added a touch of the sinister, O’Brien donned the garb of a merchant – brown jacket with light-colored checkered pants and waistcoat. He played the role (as Gilbert no doubt intended) as a well-established purveyor of goods that happen to be magical. He means no malice, simply providing what the customer wants, regardless of the foreseeable consequences. O’Brien, a company member of long standing, gave a deft and hearty rendition of the most memorable number, ‘My name is John Wellington Wells’, with its clever witticisms sung in rapid-fire succession, although some of Gilbert’s text did not come through clearly. There were enjoyable substitutions of modernisms, including prophesying the features of the iPhone’s sixth version.

The other principals also acquitted themselves well. Sarah Caldwell Smith has a smallish voice but used it to advantage in this medium-sized house. Keith Jurosko has a long history with the company that showed in his fine portrayal of Sir Marmaduke, beleaguered by the confusion over his old love, Lady Sangazure, ably performed by Caitlin Burke, and his potion-generated affection for Constance’s widowed mother, Mrs Partlet, sung by Elizabeth Picker. Richard Alan Holmes was splendid as the timid vicar who is rewarded by a match with Constance; in the delightful ‘Oh, my voice is sad and low’ he pranced around, recorder in hand, simulating the flute accompaniment. Vocal ensembles were excellent, and this was a thoroughly enjoyable performance.