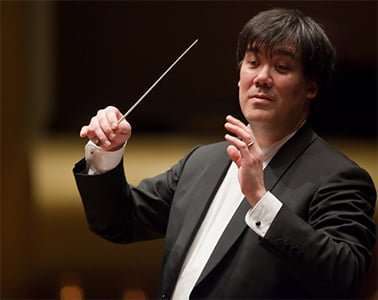 Grouping Maurice Ravel and Leonard Bernstein might seem odd at first, but the Spanish flavor of Alborada del gracioso (Dawn Song of the Jester) mixed well with the sassy, slinky and dance-inducing elation of West Side Story in which only Alan Gilbert was allowed to dip and swing, which he did. Ravel’s composition, orchestrated by the composer from his piano cycle Miroirs, would have benefited from a similar ease on Gilbert’s part. Despite a beautiful stream of percussive rattling, pizzicatos, harp strumming, fluttering flutes and clattering castanets, the rendition lacked lightness and air. The New York Philharmonic’s great volume and weighty sound were better suited to lyrical passages, though the piece ended brilliantly with trombone glissandos heralding a giant swell to the final, triumphant chord.

Thus charged, the Philharmonic showed what it could do with a crowd-pleaser, the Symphonic Dances, created in 1961 with help from Irwin Kostal and Sid Ramin from Bernstein’s score for West Side Story, which debuted on Broadway in September 1957. The music’s charisma, with plenty of syncopation and percussion (including bongos and a conga drum), along with some hearty finger-snapping and shouting (“Mambo!”) from the players, and at one point a screeching police whistle made it hard to stay still in one’s seat! It takes fabulously skilled musicians to make the slower and quieter sections as magnetic as the brassy ones – and to avoid sounding schmaltzy. The quartet of string principals delivered beautifully in ‘Somewhere’, especially cellist Carter Brey and violist Cynthia Phelps, whose luscious tone captivates. 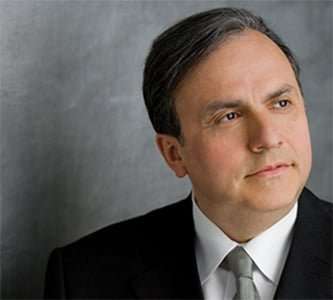 Then there was everything in between – from lilting to cool via dramatic. Every instrument, from muted trumpet to full-blown horns, clarinet to saxophone, triangle to cymbals, wood block to gong, came through with clarity and pizzazz.

The Tchaikovsky was the highlight. In a letter to his patron, Nadezhda von Meck, the composer recalled the reaction of his colleague Nikolai Rubinstein to the opening movement of his First Piano Concerto. There was a period of uncomfortable silence, followed by quiet speaking that grew in passion until “he resembled Zeus hurling thunderbolts.” That image could well describe Yefim Bronfman’s performance. Having a view of his massive hands is a must, if only to marvel that it’s humanly possible to race around the keyboard with such gigantic chords. Bronfman doesn’t try to make it look easy – he plays every note and nuance with such attention and freshness. His treble melodies in the first-movement cadenza and trills in the second-movement Andantino rang out clear and sparkling bright. The latter’s Prestissimo middle section runs the danger of sounding overly ornamented, but again Bronfman played as if he was revealing his instrument’s every layer. As this season’s Artist-in-Residence, Bronfman will tour Asia next year with the Philharmonic and give more concerts in New York, including chamber music and Beethoven’s five piano concertos. Judging from the six bows the audience coaxed out of him, there will be no shortage of demand for his epic playing.