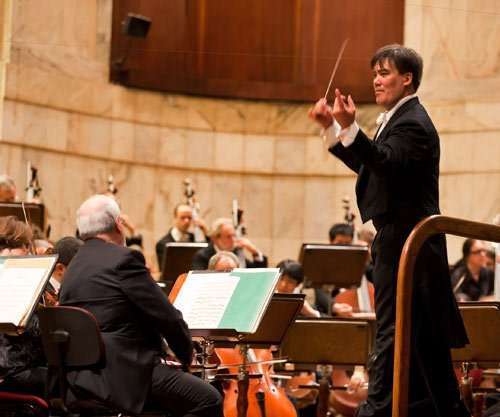 A friend of mine, told of this concert, and on learning of a kind of ‘staging’ of the final work (allied to what Alan Gilbert had outlined in his lecture to the Royal Philharmonic Society last week), reckoned that the second half would be “one of the world’s great orchestras playing one of the world’s great scores as a mere backdrop to some whirling, chaotic stage-show organised by a trendy name.” But before we come to the discreditable nonsense that characterised Petrushka, we should consider the two works that comprised the first half of the New York Philharmonic’s visit to the Barbican Hall.

The concert was made up of three ballet-scores, dating from the second decade of the last century, and certainly made for an enticing programme. Debussy’s Jeux might appear to be an odd start, for it does not give the musicians much of a chance to play themselves in, and we are at once plunged into Debussy’s late soundworld, so everything has to be spot-on from the first bar. In this account it most certainly was – here was orchestral playing of high international standard: in terms of balance and pacing, this was outstanding, and one must particularly admire Alan Gilbert’s skill in maintaining the inner life of the work during that extraordinary passage around 7 to 8 minutes in, where the tempo slightly slackens and runs a considerable risk of falling away. Gilbert judged this to perfection.

But there was one thing lacking: atmosphere. It was all too clinical, such as one feared it might be for an orchestra not used to the Barbican Hall’s aural aesthetic. In another venue, more suited to this music, one could well believe this to be the kind of performance such as Victor de Sabata might have given, although one should not take too much away from Gilbert’s and the Philharmonic’s deeply impressive reading.

The Suite from The Miraculous Mandarin can often seem an unnecessary redaction on Bartók’s part, for the complete score is only as long as Petrushka (about 35 minutes tops), and, once one has grasped the lurid nature of the story, the music makes total sense, whereas the Suite does not offer so coherent a narrative. Nonetheless it is a brilliant concert piece, and in many ways this was also a very good rendition of it, if a trifle inorganic in terms of tempo integration. A couple of intriguing irrelevances should be mentioned: the fact that the Philharmonic was not tiered, as we are so used to seeing orchestras in this country, but seated flat across the stage, and I doubt if any professional orchestra in the world can match the at-least 16 female violinists – whilst some members of the old guard might claim that lady violinists simply do not have the strength of male ones, such dichotomy as that represents was not apparent here. It was also encouraging, on entering the Hall at 7.15, to see around 80-percent of the personnel already seated, practising individually.

And now to Petrushka. It would appear that the search for new and younger audiences is as much a problem in Manhattan as it is in London. Now, there are lots of reasons as to why one should encourage young people to attend concerts – not least the simple fact that by not hearing great music they are depriving themselves of a part of their heritage: for it is everyone’s heritage, old or young, rich or poor, educated or unread.

But what is Petrushka? It is, first and foremost, a ballet, which means it tells a story through mimed dance. The story Petrushka tells is a sad one, depicting the human condition through the seeming impossibility of inanimate objects coming to life. As it is a tragic tale, it is not one to be taken lightly, for it is provocative, certainly capable of being experienced at different levels, but all surely stemming from what was in the original creators’ minds.

Yet it remains, as a work of art, a curiosity in the sense that the story itself is profoundly unoriginal, as are the means employed of telling it. We should not forget that Diaghilev’s Russian Ballet was made in France and it is the twin national heritages of ballet – Russia and France – that stand at the head of Petrushka. The score is by a Russian, but was first heard in Paris, conducted by a Frenchman (Pierre Monteux), and the story is a mixture of two great earlier ballets, by French and Russian composers. For the second Act of Leo Delibes’s Coppélia presages Petrushka in the coming to life of puppets, and in Tchaikovsky’s The Nutcracker, is full of dolls and inert objects absorbing human characteristics.

In that regard, Petrushka is far from unique, its narrative merely following-on, but what rescues this ballet – as it should – is the music: music so (largely) original (there’s a hint of Delibes at more than one point) that it can certainly stand on its own. And its colour and inherent attractiveness makes it an ideal work to attract and inform the uninitiated about ‘classical’ music – if that’s what you want to do.

What Doug Fitch wants to do is unclear. His staged version of this immortal masterpiece could not be more wrong-headed if he had tried. A large screen, in the shape of God-knows-what, carried moving pictures from hand-held cameras wandering around the extended stage in front of the orchestra, and wandering within the orchestra during the performance, revealing the members of the Philharmonic sporting funny coloured woollen hats, with the percussion section pretending to do funny things – like having a drink when not playing – whilst a group of black-clad puppeteers worked a clutch of Punch-and-Judy characters on sticks, in various guises, with cameras catching the characters in close-up for the big screen. Gilbert himself was clad as The Magician, bringing on (we assumed) Petrushka and the Dancing Doll in a suitcase, as though he’d just walked safely through Customs at some airport.

The lighting was poor, the string section changing places during the (sometimes too extended) side-drum tattoo between Tableaux, the orchestra members at one point stamping their feet in time to the music, and at another getting up whilst playing, and dancing around in the final section, as though having had one too many at a New Year’s Eve Ball. But what on earth did “Orientalism” (was it?) mean when that single word was shown on the screen? What did all of those coloured lights mean flashing around the auditorium at one point? Was it all a joke, a pre-Christmas panto? Should I have laughed at the double tragedy being played out, as many in the audience did? – the tragedy that the original story of Petrushka epitomises, and the travesty of a performance of this great music, sacrificed. I don’t laugh at tragedy, and I certainly don’t laugh at Coppélia or Petrushka, and I object in the strongest possible terms to those who do.

Behind all of this palaver, it sounded like a more than passable account of the score (on this showing the New York Philharmonic is no better, and no worse, than leading British orchestras), and the pianist was superb. “Is this the future of the American orchestra?” asked the New York Times after seeing this monstrosity. “Let’s hope so” it answered, replying to its own question. Well, America’s a big country, and there should be plenty of places for those who care about great art to hide.