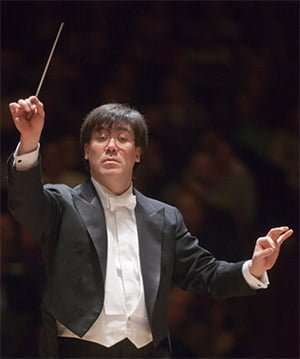 Pairing Benjamin Britten’s familiar Serenade for Tenor, Horn and Strings with his less-well-known but wonderful Spring Symphony was an excellent way for the New York Philharmonic to celebrate the composer’s centenary. But the withdrawal due to illness of tenor Paul Appleby the day before the concert threatened to subvert it, since he was to sing in both works. The NYP came up with two replacements, each agreeing to step in for one of the works. Gilbert told the audience that Dominic Armstrong had not seen the challenging tenor part of Spring Symphony until that day. Nonetheless the result was quite extraordinary. (Anthony Dean Griffey was due to sing both tenor parts on November 23, after performing the title role in Peter Grimes in Carnegie Hall the previous evening.)

The Serenade begins and ends with a haunting sequence of softly intoned horn calls – NYP principal Philip Myers – on a ‘natural’ (valve-less) instrument. Britten’s choice of poets embraces Charles Cotton, Alfred Lord Tennyson, William Blake, Ben Jonson and John Keats. The horn functions almost like a Greek chorus, reacting to the text by enhancing its imagery. Myers is a consummate musician and, a few difficulties at the top of his instrument’s range notwithstanding, gave a fine performance. Michael Slattery’s pleasantly lyric voice was just a dash too light. His dramatic manner of expression conveyed the import of the diverse texts quite impressively, particularly in the ‘Elegy’, which he sang like a tainted lullaby, and he made an admirable attempt to communicate the torturous horrors portrayed in the grotesque ‘Dirge’. The ‘Pastoral’ and the ‘Sonnet’ were sung tenderly and with deep yearning. Gilbert elicited a generally fine performance from the strings, even though he failed to plumb some of the depths he engendered beautiful and atmospheric playing.

It has been fifty years since the Philharmonic last performed Spring Symphony (under Leonard Bernstein). It was a treat to hear this remarkable masterpiece again. Written for solo singers, chorus, boys’ choir (but with girls in this performance) and orchestra, the Symphony is in four movements, each setting 16th- and 17th-century English poetry, save for W. H. Auden’s Out on the lawn I lie in bed. Spring Symphony was undoubtedly influenced by Mahler, his choral symphonies and Das Lied von der Erde, and Vaughan Williams, Holst and Stravinsky also had written in this genre by the time Britten completed tit in 1949.

Britten’s masterfully creative effects brilliantly enhance each poem. Part One begins with a long, icy slow introduction during which an a cappella chorus cries “Shine out”, calling the sun to rise and brighten the skies, their two-note figure later transformed into the bird-calls that appear in Spenser’s The Merry Cuckoo for tenor with three trumpets, and Thomas Nash’s rollicking Spring, the Sweet Spring, where further birdcalls add to the ebullient atmosphere. Woodwinds sparkle accompanying the boys’ choir in The Driving Boy (George Peele), which features a soft middle section for soprano accompanied by high strings and the boys’ pert whistling that gives the music a Dickensian character. Part One concludes with Milton’s joyous The Morning Star.

Part Two (the slow movement) opens with poems by Robert Herrick (Welcome Maids of Honour) and Henry Vaughan (Waters Above), which lead into the powerful Auden, each of its four verses framed by a captivating unaccompanied vocalise, evoking a sultry summer eve, like the prelude to a storm which erupts in the brass in the last verse. Part Three (scherzo) sets three poems, When Will My May Come, Fair and fair, and Blake’s Sound the brass. Britten described the finale as a “May day festival, a kind of Bank Holiday.” Beaumont & Fletcher’s The Knight of the Burning Pestle is the text. A flute softly begins a waltz-like theme. When the tenor declares “London, to thee I present the merry month of May” to blasts on a cow horn, a riveting allegro jumps in. At the height of the theme’s reprise for full chorus and orchestra, the boys sing out the medieval canon “Sumer is icumen in”. The tenor offers his last tribute to the season and the London setting, ending with “and therefore I cease”, followed by an orchestral unison that ends the work.

All the participants contributed admirably to this splendid performance. The characterful expressivity of the three soloists was consistently captivating, with special kudos to Armstrong for not only learning his substantial and complex part thoroughly, but singing it with assurance and delightful evocation. The Philharmonic captured virtually every nuance of this multifaceted masterwork. The New York Choral Artists gave a clear and nuanced reading of the diverse texts, and the Brooklyn Youth Chorus sang with an eager spirit, although one might have wished for more volume come the arrival of summer. Alan Gilbert set just the right tempo for each section, maintained excellent balances, and was the motivating force behind the enthusiasm of the performers.