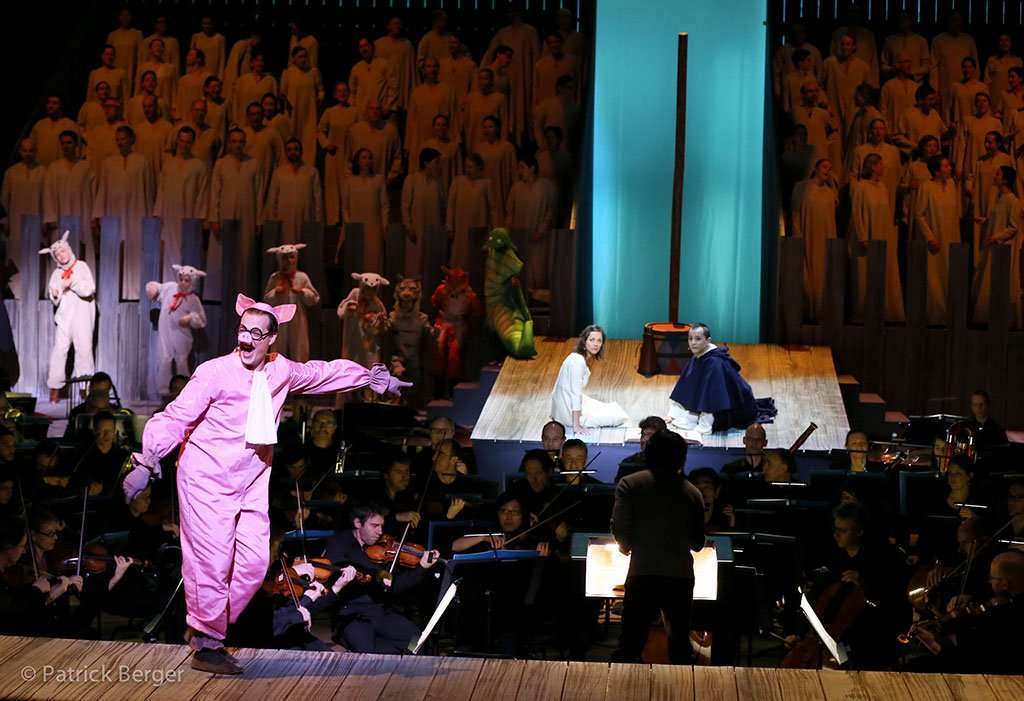 Alan Gilbert, continuing his practice of rounding off New York Philharmonic seasons with a special event, led a powerful performance of Arthur Honegger’s Jeanne d’Arc au bûcher (Joan of Arc at the Stake, 1938), featuring Marion Cotillard in the spoken title role in Côme de Bellescize’s 2012 production, created at the Saito Kinen Festival Matsumoto under Seiji Ozawa’s artistic direction. Each element of the performance – staging, acting, solo and choral singing, and orchestral playing – was brilliant, as was Gilbert’s masterful conducting.

Sigolène de Chassy’s attractive wooden set positions the orchestra forward and below stage-level, surrounding it with a passerelle that brings actors and singers close to the audience. Behind this pit, a large platform, surmounted at its rear by a tall stake, is flanked by enclosures with chorus risers and high platforms for vocalists. Colombe Lauriot Prévost’s costumes include Joan’s simple white shift as well as ecclesiastical garments for priests and Brother Dominique, whimsical animal costumes in the circus-like trial scene, over-the-top military uniforms, and colorful garb for the children. Thomas Costerg’s lighting effects add impact to the story, bathing the stage in bright red light as Joan endures the flames and, after the last note has sounded, darkening the stage as candle-like lights held by the musicians and choristers are extinguished one-by-one, leaving Gilbert visible in the hushed auditorium.

Cotillard, winner of the best-actress Oscar for her portrayal of Edith Piaf in La Vie en Rose, gave a superb portrayal of Joan as she recalls in flashbacks the events of her life, just prior to her immolation. Cotillard has performed the role many times and she delivers Joan’s words with a conviction that evokes the mystical wonder of her visions. She and the other two speaking roles could be heard with crystal clarity, aided by Peter Fitzgerald’s excellent sound design and English titles projected above the stage. 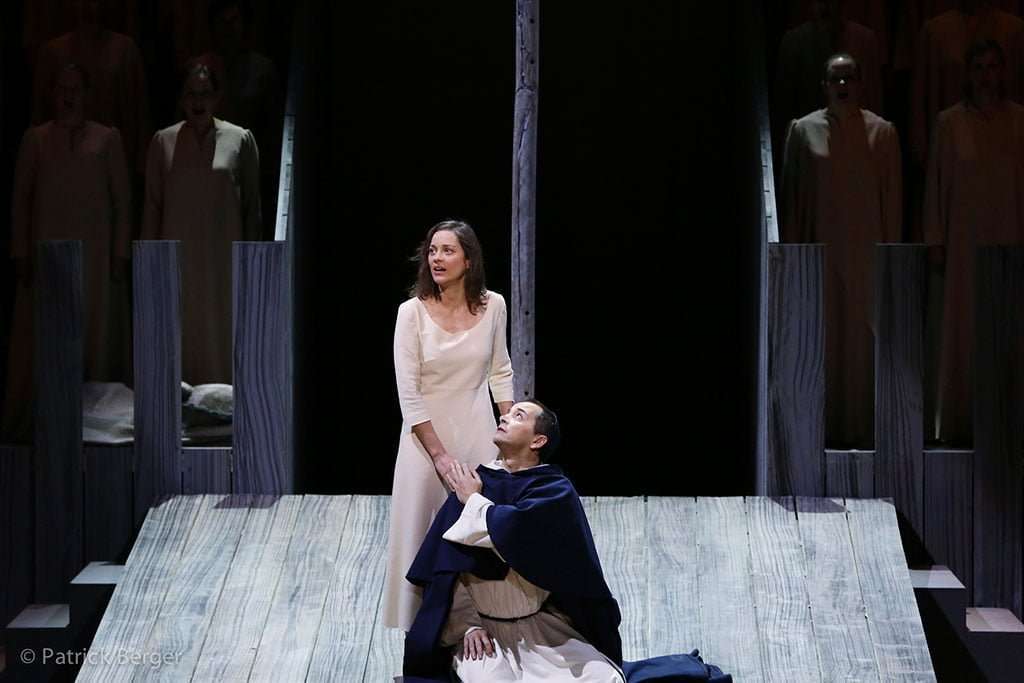 Paul Claudel’s devout Catholicism pervades his treatment of Joan as a Christ-like, albeit feminine, figure, but his libretto is also replete with humor, most prominently at Joan’s trial, and with patriotism. The Prologue was added in 1944 as propaganda, paraphrasing the opening chapter of Genesis and other biblical passages to reflect the plight of a divided France – both in Joan’s time and during the Nazi occupation in World War Two.

Éric Génovèse was forceful as the friar whom Joan imagines as the bearer of the book of her life, sharing the central platform with her until he leaves Joan to her fate. Christian Gonon was particularly affecting in his interactions with the children. He was both circus ringmaster and the Donkey (with braying provided by Estelle Lemire’s ondes Martenot) in the trial scene in which the choristers were dressed as sheep, and later he charmingly entertained the youngsters, crowning the smallest of them and bore him on his shoulders as ‘The King Sets Out for Rheims’.

Thomas Blondelle gave a hilarious portrayal of the bright-pink costumed Porcus, the pig who volunteers to serve as judge at Joan’s trial. Erin Morley was touching as The Virgin Mary in her dialogue with Joan as she met her death and then declared the primacy of love and of God. The choral groups were exemplary. The New York Philharmonic was in terrific form. Gilbert led with a sensitive hand and evident affection for Honegger’s score. He captured just the right atmosphere in each of the scenes, complimenting actors and singers without overpowering them. This was as fine as anything I’ve heard Gilbert do in his six years at the Philharmonic’s helm.