Sondheim
Sweeney Todd: The Demon Barber of Fleet Street – a musical thriller with music & lyrics by Stephen Sondheim, book by Hugh Wheeler, from an adaptation by Christopher Bond 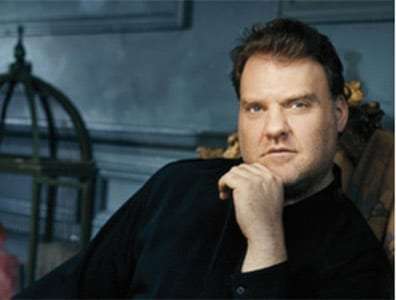 This staged performance (the third of five) of Stephen Sondheim’s Sweeney Todd featured brilliant singing and acting by Bryn Terfel and Emma Thompson. Lonny Price and an outstanding production team brought the show vividly to life, weaving members of the excellent cast and chorus around and through the New York Philharmonic players on cleverly constructed ramps and platforms, with dramatic lighting and sound effects, attractive costumes and creative use of fairly minimal props all helping to transform an orchestra concert into a theatrical experience. Price had previously directed the Philharmonic’s presentation of Sweeney Todd (in 2000) and, since then, Candide, Camelot, Company and, last year, Carousel. 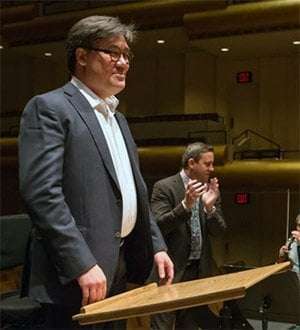 The 52-member orchestra was just about twice the size of that in the show’s original Broadway production and the diametric opposite from the approach taken in John Doyle’s 2004 version of Sweeney, which later transferred to Broadway, in which there were only ten instruments, played by the actors. To this landmark work Alan Gilbert and the Philharmonic made a strong case for bringing the same type of resources as are customarily afforded to ‘operatic’ works (although there are some who argue that Sweeney Todd is an opera). The singers were amplified by the use of invisible body microphones, but Peter Fitzgerald’s sound-design kept them undistorted and in appropriate balance with one another and with the orchestra. Dialogue and lyrics came through clearly enough to make it unnecessary to provide supertitles.

The performance began with an elaborate joke. The cast entered the stage in formal dress with scores in hand, but as they sang the opening number ‘The Ballad of Sweeney Todd’, they discarded their copy, removed outer layers of clothing to reveal their costumes, knocked over music stands and vases of flowers on pedestals, and turned what appeared to be a grand piano upside down, removing its legs to create a platform on which much of the ensuing action took place. In ‘No Place Like London’ we meet Anthony Hope, a young seaman, and Todd, an escaped convict who seeks vengeance against the Judge who jailed him years previously. Jay Armstrong Johnson’s sweet tenor here and later in ‘Johanna’ conveyed the naïveté of the love-stricken youth, and Terfel’s booming bass-baritone and larger-than-life persona introduced Todd with a powerful impact. Unbilled, but an important member of the cast, was Audra McDonald as the Beggar Woman who accosts Anthony and Todd. While the multitalented Emma Thompson performed Mrs Lovett’s introductory song, ‘The Worst Pies in London’, using a rolling pin to pound a ball of dough atop a kettledrum, it was instantly clear that the quality of her singing was fully up to her acting prowess, and her mastery of dialect and sense of comic timing were extraordinary.

The focal point of the show is the relationship between Todd and Lovett, and nowhere is that clearer than in the concluding numbers of Act One. When Todd is thwarted from taking his vengeance on the Judge, he is set off on a violent path by an ‘Epiphany’, which Terfel brought to a shattering climax, gleaming razor held high, only to be quietly interrupted by Thompson conveying Lovett’s brilliant idea of combining Todd’s planned murder spree with her meat-pie enterprise. Their duet, ‘A Little Priest’ is full of sardonic humor and clever wordplay, which they carried off with dazzling rapport. It is Sondheim’s brilliant juxtaposition of Grand Guignol bloodthirstiness and witty humor that makes Sweeney Todd such a miraculous creation.