Julian Anderson
The Discovery of Heaven [US premiere]
Franck
Variations symphoniques
Prokofiev
Romeo and Juliet, Op.64 [selections from Suites 1 & 2, Opp.64a & 64b: Montagues and Capulets – Juliet as a Young Girl – Masks – Balcony Scene – Friar Laurence – Dance – Dance of the Girls with Lilies – Romeo at Juliet’s Tomb –The Death of Tybalt] 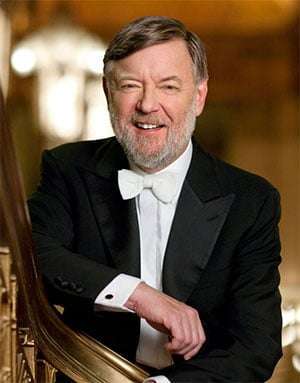 Sir Andrew Davis currently serves as music director of the Lyric Opera of Chicago and chief conductor of the Melbourne Symphony Orchestra. His appearances in New York are few and far between. It therefore was a delight to witness his excellent craftsmanship and intelligent musicianship in shaping fine performances with the New York Philharmonic of works ranging from the late-romanticism of César Franck and the spicy post-romantic music of Prokofiev to the sonic profusion of a recent work by Julian Anderson.

The program opened with Anderson’s The Discovery of Heaven, commissioned jointly by the London Philharmonic and the New York Philharmonic. Anderson has served as composer-in-residence with the City of Birmingham Symphony Orchestra and LPO, was Head of Composition at the Royal College of Music, and now serves in the same capacity at Harvard. The work’s title refers to the novel by Dutch author Harry Mulisch, but it is neither a narrative of events in the book nor a spiritual journey from heaven to earth. Rather, it explores the metaphysical duality between these two realms and what might result from their convergence.

In the first movement, ‘An Echo from Heaven’, the composer acknowledges the influence of Japanese gagaku (courtly music). Sparkling sustained chords on winds, strings and bells are also sourced in ancient Japanese music. ‘In the Street’ takes us on a walk through a busy street overwhelmed by raucous noise that soon borders on the chaotic, hustle and bustle rhythms presented in the style of a marionette play. In the final part, ‘Hymns’, the heavenly sounds of the opening movement seem to invade the earthy atmosphere, leaving cosmological questions unanswered.

Anderson’s originality combines a heterophonic abundance of instrumental voices with melodic variants using a hocket technique – a device originating in medieval music in which a single melody is presented in scattered fragments. Anderson’s diverse instrumental combinations produce an impressive array of effects, with an enormous percussion battery playing an important role in the second movement’s dense and arrhythmic scenes. There Davis and the Philharmonic expertly negotiated a complex maze of rhythmic and linear convolutions, each section of the orchestra playing brilliantly and deep concentration. 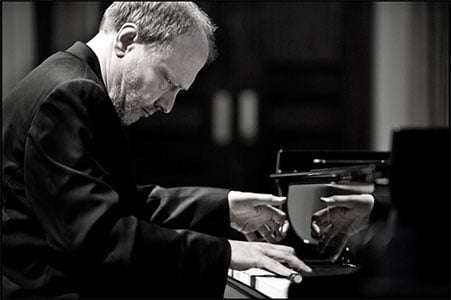 Then Marc-André Hamelin played Franck’s captivating Symphonic Variations. Its combination of wistfully meditative and rhapsodically effusive themes makes it a treasured work. Hamelin’s playing was sensitive, refined and skillful, but he seemed somewhat detached from the emotive core of the work. In the allegro passages, however, he added a robust quality to the chords that give the melodic line a resolute character. A highlight of the performance was the gorgeous sound of the cellos when they brought back the opening theme in the minor over the piano’s arpeggiated figuration.

The evening concluded with selections from Prokofiev’s prodigious and ever-popular ballet-score for Romeo and Juliet. Taking a basically conservative approach that exemplified the maxim ‘less is more’, Davis eschewed excessive dynamic levels and extreme tempos in favor of eliciting the character of each movement through clarity, precision and sonic beauty. The strikingly dignified and church-like quietude of ‘Montagues and Capulets’ never succumbed to pomposity; ‘Masks’ was suitably bouncy; the blissful serenity of the ‘Balcony Scene’ was enhanced by the rich strings, whose weeping also stirred poignant anguish in ‘Romeo at Juliet’s Tomb’; and the tragic funeral music of ‘The Death of Tybalt’ brought this impressive performance to a close.