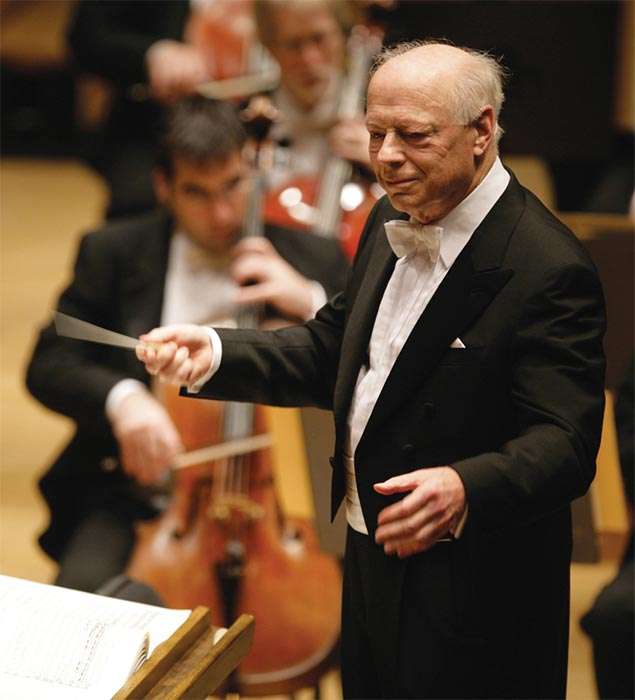 In 1909, Gustav Mahler wrote to the conductor Oskar Fried: “For my own entertainment I compose now and again a symphony (or something like the amusing work I am involved in writing at this moment); but I understand very well that the world couldn’t care less about my amusements.”

This ‘amusement’ was the Ninth Symphony, which Mahler was composing in his summer residence at Toblach amid the high peaks of the Dolomites. In many an interpretation the rough edges and abrupt pauses of the third-movement ‘Rondo-Burleske’ could be compared to the craggy contours of those mountains – but not from Bernard Haitink. The gaps were barely noticeable, integrated into a weighty reading of the Symphony as a whole. Rather than frenzied or nervous, the ‘Rondo’ proceeded powerfully at a measured pace to the central lyrical episode signaled by a trumpet, where wonder reigned and nostalgia was intermingled with a hint of suspense – until the E-flat clarinet initiated the gradual transition to a return to the opening material and the drive to the end, which could have benefited from more abandon.

The preceding movement likewise was characterized by heaviness, Haitink emphasizing the derb (rough) aspects of the Ländler and taking the waltzes out of the Viennese ballroom to the tavern. The contrasting sections, however, were the embodiment of Gemütlichkeit.

Most impressive were the outer movements. The opening horn solo by Philip Myers set the tone for a finely nuanced, yet commanding Andante comodo. From this yearning opening Haitink built potent climaxes to their subsequent shattering collapses into the abyss. The closing interplay between horn and flute (Robert Langevin), with a sweet solo by concertmaster Frank Huang, brought the movement full-circle.

The Ninth is often termed as Mahler’s “farewell” Symphony (although a Tenth was being planned), and the draft score includes numerous written indications to support this, not least “Welt! Lebewohl!” (World! Farewell!). From Haitink, such leave-taking was neither desperate nor sentimental; rather, it originated from a point of acceptance. If Mahler concerned himself with the concepts of death and eternity in the preceding Das Lied von der Erde, he had now found the answers. This Adagio was noble, radiant and supremely peaceful, taken slightly faster than sometimes heard, with a mesmerizing depth to the playing.

The New York Philharmonic distinguished itself throughout by producing a full and rich sound, and with warm strings in the Finale, the likes of which have rarely been heard in the much-maligned acoustic of David Geffen Hall (previously Avery Fisher).