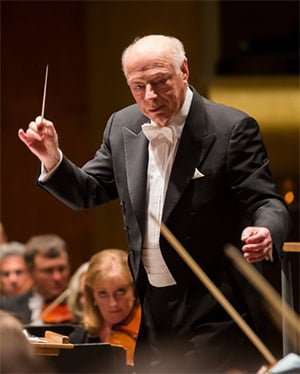 In an age in which conductors all too often take a sensationalist approach to musical performance, Bernard Haitink stands firm as an interpreter whose honest, unadorned music-making avoids such gimmicks as over-hyped dynamic levels, forced tempos, and mawkish expression. Nonetheless, as this magnificent performance of Mahler’s Third Symphony proved, Haitink can elicit more than enough power, drama and beauty to satisfy. His is a straightforward, Apollonian approach, which focuses on structural logic without sacrificing dramatic content, demonstrating that Mahler’s symphonies make a more meaningful impact when not subjected to the indulgences of excessive speed, ear-splitting climaxes or over-emphasized phrasing.

From the resolute call of eight horns with which the Symphony begins, summoning Life to awaken from his slumbers, through the inner movements’ characterizations of progressive forms of Living Being, to the triumphant majestic march to glory that is the ultimate answer to that summons, this performance was one of the very finest. Haitink’s intelligent approach refuted those who consider Mahler 3 a disparate string of movements rather than a Symphony. Formalistic considerations did not detract from the vivid impact of climactic sections, which were consistently impressive. For example, in the finale Haitink treated the three ‘crises’ which threaten to bring back the dark side of the first movement as progressively stronger, so that when the last of these terrifying intrusions is defeated, it makes more of an impact than if each of these segments were played at the same dynamic level. 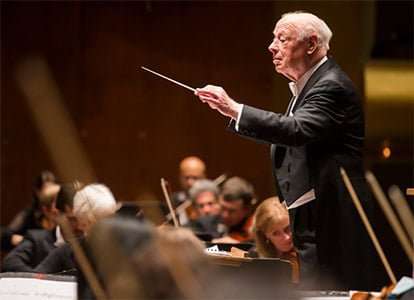 In the same movement, instead of beginning at an extremely slow tempo, the pacing was moderate, but soon became more relaxed, while unnoticeably holding back to the final peroration. As a result, the glorious closing section was rendered as a natural outgrowth of what had gone before. In the gigantic panorama of the first movement, juxtaposing the mystery of inanimate nature with the Dionysian spirit of the Pan March, Haitink deftly wove in and out of the contrasting subjects with an understanding of how to make them work within the framework of the Symphony. In the fourth movement, set to deeply profound words by Nietzsche, Haitink evoked the foreboding atmosphere of standing before the abyss, perfectly suited to the text. He urged more assertiveness in the middle section when the explanation to the entire Symphony is revealed: that Joy can outlast Sorrow. Pacing was perfect throughout the performance, especially in the stalwart first movement, the easygoing second, and the spirited third, with its playful depiction of forest animals.

Just as impressive was the strong, incisive playing of the New York Philharmonic. Strings had a brilliant sheen and rendered the sublime first theme of the finale beautifully. Concertmaster Glenn Dicterow, who is retiring at the end of this season, gave a sprightly reading of the violin solos in the first two movements. The horns that pronounce the declamatory opening were in perfect unison, and the brass sounded resplendent, vibrant and full-bodied. When the demonic first subject threatens to return in the midst of the rollicking march, they seemed to rise like brazen interlopers above the throng to reprise the shadowy side. Special credit goes to principal trombonist Joseph Alessi for his first-movement solos and to Matthew Muckey, who played the posthorn solos in the third movement admirably.

Making her debut with the Philharmonic, Bernarda Fink sang in the fourth and fifth movements with purity of tone and sensitive expression. The choral forces were delightfully angelic in the brief fifth movement. As the finale began to build gradually to a triumphal conclusion, one could not help but be caught up in the intensity of these final moments. As soon as Haitink cut off the long-sustained D major chord with which the Symphony ends, the audience responded with thunderous applause. This wonderful performance proved once again that great music-making can stir the soul without going to extremes.