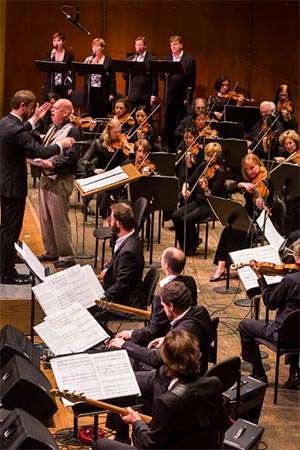 Following the lead of art curators around the world, the New York Philharmonic has inaugurated its first Biennial, an 11-day festival with events at Lincoln Center, The Metropolitan Museum of Art, The Museum of Modern Art and other New York City venues. Envisioned by Philharmonic Music Director Alan Gilbert as a “playground of new and exciting music”, the Biennial is offering 13 programs of music by more than 70 composers, as well as a variety of offshoot activities such as meet-up events, lectures and panel discussions, and online activities encouraging audience members to engage directly with composers, artists and scholars. This, the second program – or, in keeping with the visual-art biennial idea, “pavilion” (the first was a Gotham Chamber Opera production of Toshio Hosokawa’s 2012 opera The Raven, coupled with André Caplet’s 1924 also-Poe-related Conte fantastique) – was comprised of Julia Wolfe’s Anthracite Fields, a multimedia oratorio for instrumental ensemble and eight-part chorus that premiered one month ago in Philadelphia, and Steven Mackey’s Dreamhouse, a definition-defying commission for the 2003 Holland Festival.

Anthracite Fields is Wolfe’s second work honoring the American worker, and it may be her most engaging. Her first, Steel Hammer (2009), an evening-length art ballad, was inspired by the music of Appalachia and the fabled life of the legendary railroad worker John Henry. For Anthracite Fields, Wolfe probed more deeply into the history of American labor, examining local and national issues related to coal mining. She says her aim was “to honor the people who persevered and endured in the Pennsylvania Anthracite coal region during a time when the industry fueled the nation, and to reveal a bit about who we are as American workers.”

Wolfe’s engaging and unpredictable score is inspired by folk, classical and rock genres. The powerful text is drawn from oral histories, local rhymes, coal advertisements, geological descriptions, a mining accident index, contemporary everyday activities that make use of coal power, and a historic speech by John L. Lewis, former head of the United Mine Workers of America. The effect of the music and words is intensified by striking visuals – video featuring period photographs of miners’ faces morphing into one another, texts, topographical maps and advertising images – projected on a huge screen suspended over the stage.

The five-movement piece is about 65 minutes long. The first, ‘Foundation’, begins with the chorus chanting the names of miners in the Pennsylvania Mining Accidents 1869-1916 index. Limited to those named John with one-syllable surnames, the list is about 400 names long. The movement ends with a shorter list of multi-syllabic surnames, reflecting the ethnic diversity of the miners. Then ‘Breaker Boys’ centers on the young men who risked injury and death as they removed debris from the coal running down the chutes, and mixes street-rhymes describing the relentless work with escalating jazz rhythms. In the pivotal ‘Speech’, a soloist delivers Lewis’s impassioned words in a contemporary folk style, as the chorus repeats significant phrases. The mood changes in ‘Flowers’. Inspired by an interview with a woman from a mining family, the music grows softly and harmoniously as a list of flower names is intoned. Finally, ‘Appliances’ ties modern life to the old, as it catalogs the activities that use electricity generated by coal and ends with a railroad advertising rhyme from 1900, featuring the fictional Phoebe Snow, whose “gown stayed white” as she rode to Buffalo on a train run on anthracite.

The Bang on a Can All-Stars, playing an array of instruments from cello to bicycle-wheel harp, achieved astonishing and deeply felt effects with Wolfe’s music. The Trinity Wall Street Choir sang with dramatic intensity and passion. While the words and music would have been sufficiently powerful on their own, Jeff Suggs’s scenography and projections made the experience all the more enveloping.

Following the Wolfe, the New York Philharmonic along with others performed Steven Mackey’s Dreamhouse. The 45-minute piece casts Rinde Eckert (who co-created the libretto with Mackey) in the singing and speaking role of The Architect who shatters the myth of the American Dream as he chronicles the architectural details in the building of a perfect home (“Where you can live, Where you’ll be safe”) and alludes to the simultaneous disintegration of the relationships among the people who inhabit it.

Like Anthracite Fields, this is a hybrid piece, unabashedly American in tone and stance. The music displays a wide range of genres – 16th-century liturgical music, hocket, rock, jazz, even a little scat. Passages of Ivesian complexity are followed by lush and dreamy moments punctuated with catchy phrases and lots of syncopation. The music abounds with echoes of Bernstein, Copland, John Adams, and Broadway. Jayce Ogren cued the large ensemble through the complex score with great energy and precision. And in a concert in which all the performing forces delivered their best, Rinde Eckert was a standout, displaying tremendous vocal and dramatic versatility.