Continuing the New York Philharmonic’s “Brahms the Romantic” festival, in which music director Lorin Maazel is leading the orchestra in all of the composer’s orchestral works, including the concertos and “German Requiem”.

This concert opened with the Academic Festival Overture, which Brahms composed for the occasion of his receiving an honorary degree. The overture weaves in popular student songs of the day, but as performed by Maazel, those tunes came off as a bit stodgy, perhaps as they might have been recalled by the fossils of academe who award the degrees rather than by the firebrand students upon whom they are conferred. Nevertheless, the performance was engaging, featuring some fine management of the score’s subtleties and excellent playing, with particularly fine trumpet, horn, bassoon and oboe solos. The finale, based on “Gaudeamus igitur”, brought the overture to a majestic conclusion.

Julia Fischer gave a creditable performance of the Violin Concerto, well supported by Maazel and the orchestra. She demonstrated her musicality and virtuosity throughout the work, but particularly in Joachim’s cadenza in the first movement. She played with sweetness of tone that worked well in emphasising Brahms’s lyrical melodic lines, but her sound was not lush, nor was it exceptionally powerful in the concerto’s more dramatic passages. 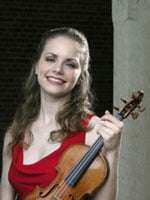 The second movement Adagio was lovely, beginning with principal oboist Liang Wang’s extended and beautifully intoned solo, accompanied only by winds and horns. Fischer’s melodic line began with almost syrupy sweetness, but became more dramatic as the movement progressed, regaining its sugary character as the oboe reprised the opening theme and the horns provided a soaring accompaniment. A spirited rendition of the Allegro giocoso finale brought the concerto to an exciting finish. Fischer offered an encore, the Andante from Bach’s Sonata in A minor, BWV1003.

Maazel then led a compelling performance of the First Symphony. Brahms laboured over this work for some fifteen years, ever aware of the inevitability of its being compared to the symphonies of Beethoven. By the time he finally completed it, Brahms had crafted a powerful work – more so than any of his succeeding three symphonies would prove to be. Maazel seemed to take this fully into account in his vigorous and dramatic reading of the first movement, taking control of every detail. For example, at the very outset, he added impact to the pedal point on the timpani, contrabassoon and double basses, making the opening bars, marked f in the score, seem louder than the ff passage later in the introductory section, toning down considerably the extended timpani roll there. Happily, this and Maazel’s other idiosyncratic touches generally seemed to work well, shaping the movement into a coherent and suitably powerful whole.

Wang’s beautifully played oboe solo in the introductory section was echoed by the cellos, ending with two soft pizzicato notes that were followed with sudden impact by the onset of the Allegro and the statement of its principal theme. Maazel set a driving pace, slowing when the first of principal horn Philip Meyers’s sonorous solos initiated some extended interplay between the horn and the solo wind principals, but then driving the music forward harder than ever as the agitato strings were accented by horns and trumpets. Another slower interlude – with a well-played solo by principal bassoon Judith LeClair and then a duet by Wang and principal flute Robert Langevin, with violin tremolos supplying considerable tension – was supplanted by the return of the agitated string figures, with the horns even more emphatic this time around.

As Maazel negotiated this alternating pattern, he clearly emphasised the rapid, powerful passages, yet neglected neither the slower, lyrical ones that provided contrast and relief of tension nor the transitional passages between contrasting segments. Particularly noteworthy was the transition from a near halt in the development section to the start of the recapitulation. This passage began pp on the contrabassoon, cellos and double basses, which built in volume as wind figures and increasingly persistent repeated-note horn and trumpet calls sounded over tremolos on the second violins and violas. A ff pedal point on the contrabassoon and double basses beneath repeated figures on winds, horns, trumpets and timpani and then rapid semiquavers on the strings led to a series of modulations, finally emerging into the recapitulation. The movement’s final transition, in the brief coda, was also satisfying. As the violins played a sorrowful version of the opening theme, swelling from p to f and back, Maazel slowed the tempo even before the ‘Meno allegro’ section that brought the movement to its quiet resolution – surprisingly, in C major (a hint, perhaps, of what was to come in the finale). 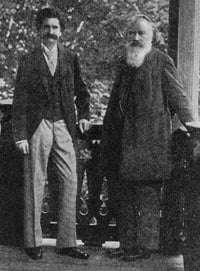 In the second movement, Andante sostenuto, Maazel struck a fine balance, projecting both the inherent sweetness of the music and the depth of emotional content that allowed it to hold its own in the overall scheme of the symphony. All of the string sections excelled here, both in sound production and in the interplay among themselves and in support of solo and ensemble playing by the winds and horns. Concertmaster Glenn Dicterow’s solos late in the movement were beautifully played, his strong vibrato and Meyers’s horn joining to sustain the movement’s concluding notes.

The third movement’s sunny opening (and recurring) principal theme was played with delicacy and charm by principal clarinet Stanley Drucker, accompanied by bassoon, horn and pizzicato cellos. Maazel’s pacing and phrasing as the violins took up the theme emphasised its gracefulness – appropriately so, given Brahms’s Un poco allegretto grazioso marking. In the contrasting trio section, with its changes in key (from A flat to B) and meter (from duple 2/4 to compound 6/8), Maazel built up tension as the trumpets joined the horns to bring the music to a climax at the trio’s end. He then masterfully managed the transition from the reprise of the genial opening clarinet theme, accompanied by triplet figures in the winds (a carryover from the trio), through the brief, tranquil coda (also based on material from the trio) to the movement’s quiet, sudden ending.

It is, of course, the finale that has the greatest impact on listeners, its signature themes – not motifs from the earlier movements – resonating silently in their heads, or audibly hummed, as they leave the hall. Here, Maazel and the Philharmonic did not disappoint.

The opening Adagio served a double introductory function, its slow, agitated, minor-key first half leading up to two majestic themes in the second half that followed a change to C major and to a faster (Più andante) tempo. Meyers’s resonant horn solo and then a chorale-like theme on three trombones were both played with an expansiveness that led naturally into the Allegro and its sweeping principal theme, so evocative of the theme of the finale of Beethoven’s Ninth Symphony. Maazel’s reading of the Allegro was, for the most part, agitated and stormy, with relief from the tension coming principally at recurrences of the horn theme and a single recapitulation of the principal theme. The extended coda barely alluded to the principal theme, focusing instead on the horn theme and a breathtaking restatement of the chorale on horns, trumpets, trombones, contrabassoon and strings, then galloping (with a few slight hesitations) to a triumphant conclusion that evoked thunderous and prolonged applause.