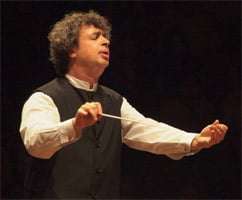 Semyon Bychkov’s demanding program began with perhaps Henri Dutilleux’s most accessible orchestral work, Métaboles. And while the composer eschews comparisons, the opening sonorities – reminiscent at once of Stravinsky’s Symphonies of Wind Instruments – are an immediate attention-getter, and the work’s combination of Messiaen-like strophic melodic gestures, not-quite-tonal-centric harmonies, atmospheric string sonorities and short, ultra-precise staccato brass and wind outbursts are a great fit for the New York Philharmonic’s bright string sound and powerful wind section. Bychkov has a clear affinity for this work, and the players responded with enthusiasm, showing a bit more physicality than usual.

Bychkov has been a long-time collaborator with Katia and Marielle Labèque, a remarkable piano-duo with a wide-reaching repertoire. Bohuslav Martinů’s Concerto for Two Pianos was written in 1943 during the Czech composer’s American exile. The work is devoid of any ‘big tunes’ but holds the listener’s interest with fascinating motivic variation (not unlike the Dutilleux), a rich array of color, and intricate piano pyrotechnics. 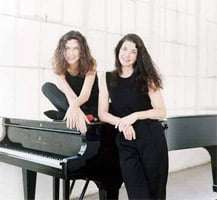 The Labèques have been playing this work for a long time, and play the very demanding piano parts (which, with the exception of two Ravel-esque cadenzas in the central Adagio, are played together as a ‘tandem’ solo) with remarkable assurance and precision. The first movement’s opening is unusually dissonant for Martinů, but quickly settles into the rambling diatonicism that characterizes most of his mature output. Martinů’s signature rhythmic spikiness – with rhythms often at odds with the time signature – predominate the outer Allegro movements, and the exceptionally well-balanced orchestral dynamics (which can sometimes be a tricky matter in the challenging acoustics of Avery Fisher Hall) revealed a panoply of details and nuances, even in the thickly orchestrated outer movements. The Adagio, on the other hand, is very thinly scored, with exposed solo woodwind and string writing reminiscent of mature Bartók and early Lutoslawski. The playful finale – with long stretches of percolating ‘moto perpetuo’ and solo passages for the piano that sometimes have a fast ragtime feel in the able hands of the Labèques – builds to a propulsive resolution, which generated more than a few goose-bumps.

Bychkov’s interpretative approach to Rachmaninov’s Symphony No.2, while not giving short shrift to the beauty of the unfolding melodies, is to focus on the symphony’s broader structure. His carefully considered dramatic pacing, sparing but striking use of ritenuto and rubato, and focus on utter clarity of balance – bringing to the fore voices or countermelodies that often get lost in the thick orchestration – reveal his view of the work as substantial; the work, in Bychkov’s hands, is revealed not a romantic anachronism but a large-scale masterpiece far ahead of its time.

The Philharmonic, for its part, played with a deep, resonant sonority quite different than that employed in the first half of the concert. The first movement’s portentous opening Largo, with its demanding dynamics, gave way to an Allegro moderato dominated by beautiful cantabile playing and propulsive tempos; the movement’s final note was doubled on the timpani, though not as grotesquely as other conductors have handled that unofficial orchestration. The scherzo was played at a tempo slightly faster than is the custom, and to good effect, emphasizing the main theme’s contrasting horn and violin call-and-answer, with a central Meno mosso that showcased the Philharmonic’s incisive string sound.

The Adagio sported exceptionally beautiful playing from the clarinet with just the right amount of vibrato – and a soaring climax that generated a massive volume of warm sound without the least stridency. Bychkov employed subtle but effective – and unexpected – tempo flexibility in the finale’s main theme (a slight accelerando to its last phrases), emphasizing the theme’s tarantella nature as few conductors have. He completely avoided the sort of overwrought rubato in the movement’s second theme that mars too many performances. Likewise, Bychkov navigated the coda’s spectacular tutti and brass chorale theme without a jarring tempo shift, finishing off with a final, fast flurry on the opening theme.

It’s not every day that you encounter a conductor – or orchestra – that seeks to treat Rachmaninov with the same gravitas as Mahler or Shostakovich and still deliver an exciting and beautiful account of the work. Bychkov and the Philharmonic certainly succeeded – and then some. Do catch the repeat performances!