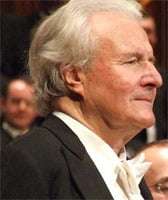 Sir Colin Davis has had a long and fruitful association with the New York Philharmonic, including serving as its principal guest conductor from 1998 to 2003. The orchestra seems to play at its best when he is on the podium, and this concert was no exception.

Despite its confusing numerical designation, Leonore Overture No.2 is actually the first of four overtures that Beethoven composed for his only opera. “Fidelio” (which was originally titled “Leonore”). Although based on familiar themes from the opera, it is no longer associated with it and continues to be played (mostly) as a concert piece. Davis drew brilliant playing from the orchestra, attacking and cutting off notes with great precision, thereby giving the intervening silences terrific impact. The Philharmonic’s sound was excellent, with notable contributions including the cello section singing out at various points, the brilliant trumpet-call played from the rear of the auditorium, and the horns as the overture neared its conclusion. The performance was quite powerful and majestic overall, although Davis’s somewhat slow tempos diminished the level of excitement in some passages.

Davis and Richard Goode gave Beethoven’s Fourth Piano Concerto a sparkling performance that succeeded in capturing the work’s high spirits and lofty nobility. Goode and the orchestra made an ideal partnership as they alternately and in combination gave expression to Beethoven’s harmonically complex opening Allegro moderato. Goode played the first of the two cadenzas Beethoven wrote for this movement, tossing off its complex passagework with ease and playing its thematic material with a simple elegance.

Goode and Davis collaborated in a marvellous traversal of the Andante con moto. Goode’s gentle piano line resisted and gradually prevailed over the impulsiveness and severity of the orchestral passages. Ultimately, breaking the tension of extended piano trills and runs, soloist and orchestra came together to create an almost mysterious atmosphere – soft arpeggiated piano chords and ppp strings – at the movement’s end. It is rare, even in Beethoven’s oeuvre, for so much to be accomplished, both musically and emotionally, in so short a span. The finale was bright and bouncy, Goode’s piano leading the way through Beethoven’s inventive variations on the rondo theme as Davis and the orchestra provided firm support.

After the interval, Davis led a searing performance of Vaughan Williams’s Fourth Symphony. In the first movement, he evoked seamless transitions from the high-intensity opening to the pulsing horns and biting string theme that followed, and later, after the horn passage and string motif were reprised, through a brief passage for brass choir to a gentle theme beautifully played by the violas and cellos that brought the movement to a tranquil end. The low strings, playing pizzicato, were soon at the forefront in the Andante, providing an ostinato beat as the strings, section by section, and then the winds entered sequentially playing distinct contrapuntal lines. Here Davis kept each line lucid and in perfect balance with the others, allowing the complex contrapuntal structure to build dramatically, after which solo bassoon and flute combined to portray a rather bleak landscape. Another build-up of tension followed, until a cymbal crash served to puncture the balloon, allowing the tension to dissipate.

Davis took the scherzo at a rollicking pace, articulating its complex rhythms with precision. The winds – especially the bassoon – and strings combined well here, and the Philharmonic’s brass section excelled in the fugato passages in the trio section. Again in the finale, the brass was pre-eminent, both in the movement’s march-like opening and in the epilogue. Davis kept the music pulsing forward relentlessly, right up to the abrupt final chord and signalling a vociferous ovation. Sir Colin, who turned 80 last year, is not scheduled to conduct the Philharmonic next season; hopefully though he will return.