The best performance I ever heard conducted by Christoph von Dohnányi was in October of 2000 at Carnegie Hall, Schumann’s Second Symphony with the Cleveland Orchestra. He was profoundly engaged with the music, shaping phrases and indicating nuances with gestures of his left hand, all within a perfectly conceived structural framework. And all of this without giving one beat with his right arm. He couldn’t, as it was immobilized because he had injured his shoulder.

That concert immediately came to mind when Dohnányi started Dvořák’s Eighth Symphony by giving four beats to the bar and micro-managing the first statement. Instead of letting it pour forth as one continuous, nostalgic phrase, he repeatedly interrupted it with mannered ritardandos. Sometimes less is more, fewer beats lead to a more natural flow, as was apparent in the third movement. But even there he couldn’t resist changing from one beat to the bar to three at some more active moments, as if the New York Philharmonic needed such ‘help’. Carlos Kleiber once mentioned trusting an orchestra as one of the cornerstones of conducting; Dohnányi seems to need to control everything, as made apparent by his large, vigorous beats even during the trumpet fanfare which opens the finale. In that movement Dohnányi made the curious choice of increasing the tempo substantially for the flute variation. This made it difficult for Robert Langevin, sitting in a fairly dead spot on the stage, to make his instrument ‘speak’ and project sufficiently at such a speed. Dvořák does increase the pace slightly at that point, but only to the main tempo of the movement. Dohnányi sped up for this variation only, and immediately slowed down again afterwards.

He also introduced another unusual reading of the composer’s markings in the second-movement Adagio just before the coda. Here the violins take up the lyrical theme, accompanied by descending woodwind scales. Dvořák marks it Tempo I, meno mosso, slower again, and it is one of the most beautiful episodes in the symphony. Dohnányi took it faster, and thereby spoiled the whole effect of peace after a storm. These interpretive decisions were all the more regrettable as this could have been a very enjoyable occasion. The Philharmonic produced a rich, warm sound, and some breathtaking pianissimos. When Dohnányi didn’t unnecessarily interfere or let the brass overpower the rest of the orchestra, there were many attractive moments. Unfortunately they didn’t add up to a convincing performance overall. 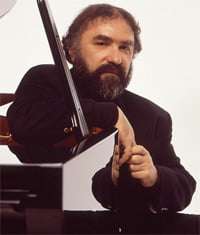 During Radu Lupu’s account of Schumann’s Piano Concerto with the Philharmonic and Riccardo Muti in 2007, the pianist’s artistry inspired the musicians to play with a heightened sense of color and character, which then disappeared for Bruckner’s Sixth Symphony after the interval. This time it was the other way around. There were ensemble problems, both within the orchestra, and between it and the soloist. Furthermore, the string sound was edgy and bright, although there was only one stand of players fewer in each section than in the ensuing symphony. Losing a few string-players out of a big section does not make that much of a difference when it comes to volume. However, by using only six rather than eight double basses, the foundation of the string sound was weakened, robbing Brahms of the richness his music needs, especially in an already bass-light hall. And this reduction did nothing to alleviate balance problems; in the loudest moments the conductor still allowed the orchestra to cover the soloist.

Lupu’s Steinway had a very clangorous treble sound, and almost-dead bass strings. The pianist didn’t help matters by trying to force sound out of the instrument, applying generous amounts of pedal, and throwing in occasional wrong notes. He found some imaginative voicing, and created poetic moments in the second movement, but on the whole he delivered an uninteresting, monochromatic performance. Lupu’s Schumann had been exquisite and a recital at Carnegie Hall last February was revelatory. However, as much as he may resemble that famous drawing of Brahms reclining in his chair in front of the piano, this concerto eluded him.