Chávez
Symphony No.2 (Sinfonía India)
Dvořák
Violin Concerto in A minor, Op.53
Prokofiev
Symphony No.5 in B flat, Op.100 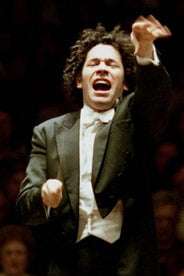 Gustavo Dudamel, the energetic young conductor whose concerts and recordings with the Simón Bolivar Youth Orchestra of Venezuela have generated a mountain of buzz and press coverage, was recently named music director of the Los Angeles Philharmonic. Anticipation – and expectations – have been running extraordinarily high for his debut with the New York Philharmonic. (This was the second of four performances.)

Carlos Chávez’s one-movement Symphony No.2 is written in an idiom rich in rhythmic vitality and (uncharacteristically for this composer) using melodic material drawn from indigenous Mexican ‘Indian’ folk and traditional music and influenced by – but more conservative than – Silvestre Revueltas, and also owes a good deal to the influence of contemporaries including Virgil Thomson and Henry Cowell. The work is scored for large orchestra, including over a dozen traditional Mexican percussion instruments. From the first downbeat, Dudamel’s conducting proved to be the epitome of clarity if a bit larger in gesture – even during quieter passages – than one is accustomed to seeing. The performance of the work, however, seemed disappointingly soft-edged, monochromatic, and a little too dynamically anaemic – but the quiet passage that preceded the final energetic section, with an oboe accompanied by lower strings and percussion, was reminiscent in colour and mood of Aaron Copland, and the final tutti passage took on the frenetic atmosphere that its opening had suggested.

Dvořák’s Violin Concerto has never enjoyed the popularity it deserves. Gil Shaham is the sort of champion this work needs – his lively and unabashedly Romantic approach shook more than a few cobwebs off the work. Shaham employs more portomento than most of his contemporaries; this combined with the warm sound of the 1699 Polignac Stradivarius delivered the beauty of the first and second movements’ cantabile melodies, and his incisive bowing and clarity made for a propulsive Allegro giocoso finale. Shaham and Dudamel had a good rapport – Dudamel followed Shaham in tight rhythmic sync, and Shaham was as animated as Dudamel. The performance was undermined though by a string section that was about 50 percent bigger than needed, bringing balances that were less than optimal and there was also some uncharacteristically underemphatic playing.

Dudamel seemed far more at home with Prokofiev’s Fifth, and the orchestra was on a different level of engagement. The work was written in 1944, roughly at the same time as Shostakovich’s ominous Symphony No.8, yet seems worlds away (and for good reason – Shostakovich had been caught up in the Battle of Leningrad as a fireman; Prokofiev spent much of the war 150 miles north of Moscow in an artists’ retreat).

Dudamel elicited a soft-edged, atmospheric opening of the first movement that nevertheless portended turbulence that belies the work’s key of B flat, and the movement’s fortissimo passages were played with the sort of crashing force that reminds you that this is a war symphony — including the emphatic, stoic coda. The manic Allegro moderato second movement opened with strings not quite as together as one expects from the Philharmonic, but with rock-solid playing from the winds. Dudamel drew rich color from the orchestra especially the movement’s quirky, slower central section, and balances were exemplary. The ominous brass playing that precedes the ‘a tempo’ was particularly effective, with remarkably wide dynamics. And while the recapitulation was not quite as cleanly played as one would expect, the insistent coda was played with startling power – especially the abrupt ending.

Prokofiev wrote the Adagio third movement with a completely different string sound than that of the Philharmonic in mind, and while these musicians may sound nothing like the Leningraders of a couple of generations ago, they unleashed as explosive and potent a sound as the brass in the movement’s climax – and Dudamel coaxed out the long, unfolding line of this movement with amazing control in what was far and away the best music-making of the evening. The Allegro giocoso finale was not as successful – the energy level seemed to drop a few notches, and the movement became episodic and choppy, but everything was completely in focus and on track for the coda, which mock-mechanically percolated to an explosive and uplifting finish.

Dudamel seemed almost embarrassed by the warm and prolonged ovation he got, and practically leaped into the orchestra to shake the hands of a number of the principals.

I could not help but feel that I was present at a ‘product rollout’ that was about two or three years premature. Make no mistake – Dudamel is a major talent, but one can’t help but wonder if he’s being put before the greater public too early. The Los Angeles Philharmonic is taking a risk with his appointment – but judging from this New York concert, warts and all, there’s a strong chance the artistic rewards may well be worth it.