A programme note, ideally, should do more than merely inform or describe; it should stimulate, arouse interest, and give the listener some form of connection, some way to engage with the music. Unfortunately, composers tend to be particularly bad at offering any substantial elucidation when it comes to writing about their own work. Sebastian Currier’s note for Time Machines bandies about words and phrases like “abrupt, and incongruous fragments”, “entropy” (what is this sudden vogue for composers to use scientific terminology?), and “varied harmonic landscape,” so one would have no clue that his brand-new piece is in fact chock full of character and incident.

Time Machines is a violin concerto in everything but name. Set in seven relatively brief movements, it begins in frenzied mood, with the soloist zipping around in jagged lines, like a sprinter racing through a complex maze. Meanwhile, the orchestra mirrors the violin’s twists and turns, accompanied by syncopated shouts of encouragement from the brass. The second movement offers stark contrast, as the violin intones lyrical lines echoed (almost wistfully) by the orchestra. The fertility of Currier’s imagination is matched by his skill. In the fourth movement, the violin’s tone seems nearly weightless, invoking a fluttering, avian tone. And in ‘backwards time’, both soloist and orchestra suggest a tape recorder set in reverse. One can imagine memories flitting by, left and right, as one moves forward through time. On paper, it sounds like a technical tour-de-force, perhaps, yet the aural effect is touchingly nostalgic. 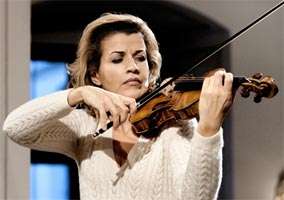 Anne-Sophie Mutter, for whom Time Machines was written, gave a commanding, elegant world-premiere performance. One felt she’s lived with this piece for years. And the same could be said for Alan Gilbert and the New York Philharmonic, as the orchestral and solo parts dovetailed so precisely. Mutter’s stylish, sharply focused interpretation came as something of a relief following her ungainly performance of Beethoven’s F major Romance. The contrast was startling, in fact. Her tone in the Beethoven was edgy and her phrasing perfunctory. In the Currier, she seemed to be a different violinist entirely. Thanks in large part to Mutter’s impassioned advocacy, even the notoriously conservative Philharmonic audience responded to Currier’s work with loud enthusiasm.

After the interval, Gilbert led the first New York Philharmonic performance of Bruckner’s Second Symphony in 40 years when Michael Gielen conducted the work with the orchestra in 1971. (Interestingly enough, the Philharmonic premiere was given in 1925 under Willem Mengelberg. If only there were a recording of that performance.) The Second is the charmer among Bruckner’s early symphonies. Lyrical, luminous, and richly atmospheric – it’s arguably as deserving of the ‘Romantic’ moniker as the Fourth Symphony. Gilbert’s affection for the score (here the last of Bruckner’s several revisions, as edited by William Carragan; the original score is from 1872) was apparent from the first bars and the way he had the cellos sing the opening theme with full-throated ardor. Perhaps Gilbert loves the work a bit too much, as his generally measured tempos occasionally had the effect of making the music seem stodgier than it is. The finale was the least persuasive, with too many tempo changes that put undo focus on some awkward transitions. Yet, in the slow movement – the symphony’s emotional highpoint as well as its most stunning compositional achievement – Gilbert found magic on nearly every page. Philip Myers deserves special praise for handling the treacherously exposed horn solos with expressive intensity, and without cracking even one note.