First, here are the big details for Mahler obsessives: yes, Alan Gilbert took the first movement repeat, and the order of the inner movements was Andante-Scherzo (see link below). 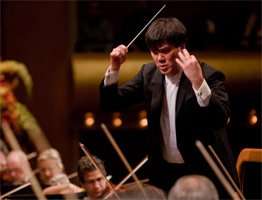 After having survived two nights of Nikolaus Harnoncourt slapping his ‘historically informed’ imprimatur on the Vienna Philharmonic’s unique sonic character, it was a pleasure to hear the New York Philharmonic sounding very much like the New York Philharmonic: strong ensemble-playing (save a minor lapse between the first two ‘hammer blows’ in the finale) and excellent balances. Gilbert arranged the violins antiphonally, violas to center-left, cellos to center-right, and basses on the far right, and opted not to use any baffles behind the brass. The blend in this seating sounded as good as I’ve ever heard in Avery Fisher Hall. On this particular evening, the orchestra played as well as I had ever heard it under Lorin Maazel; in fact, it was some of the most beautiful playing I’ve heard from the Philharmonic in quite some time.

And therein lies the biggest problem with this particular performance of Mahler’s supercharged Sixth Symphony: everything sounded too appealing. Music that is supposed to be grotesque was rendered as colorful; the big climaxes, particularly in the slow movement and finale, were grand but almost entirely without tension or angst; and I did not hear a single genuine pianissimo all evening.

Matters were not helped by Gilbert’s habit of lingering too long over some of the first movement’s slower passages, which transformed passages intended to be a respite from the ratcheted-up march-music into turgid, static holes in the music. The second movement was hobbled by similar issues whenever the tempo slowed. I did like the pungent accents that Gilbert applied to the lopsided Ländler trio music in the scherzo, but the main theme was too smooth and clean, without the slightest trace of torment-laden snarl that Mahler’s orchestration is supposed to produce. But I was impressed by the opening pages of the finale – one of the most forward-looking passages Mahler had written. Here Gilbert played up dissonances and timbres that foreshadow the orchestral works of Berg and Schoenberg. From the entrance of the first signs of the march music, the forward momentum was inexorable – but the sudden shifts in mood, the Expressionist outbursts, even the calms before the storm were oddly bland. One wished the third hammer blow (which Mahler superstitiously deleted) a few bars before the end had been as startling as the first.

This offering was, nevertheless, a huge improvement over the performance of Mahler’s Third Symphony that marked Gilbert’s official debut just over a year ago. Gilbert adhered very closely to Mahler’s indications, but in the end it didn’t sound so much like Mahler’s colossal ‘Tragic’ Symphony as a flawless, virtuoso run-through.