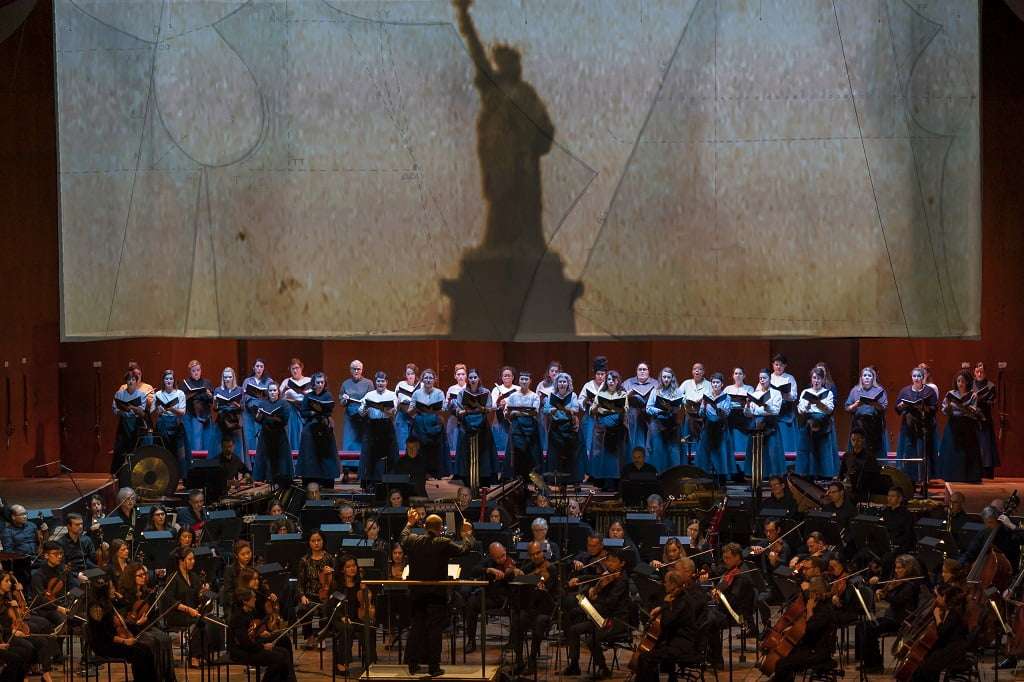 The evening opened with a finely rendered performance of Elegy, the brief and doleful interlude from Steven Stucky’s 2008 oratorio August 4, 1964, written in honor of the centennial of the birth of the thirty-sixth US President, Lyndon B. Johnson. Next came a brighter, lighter piece, Copland’s Clarinet Concerto, featuring Anthony McGill, the Philharmonic’s principal. McGill perfectly captured the dreamy lyricism of the wistful first section, and was most impressive delivering the scampering riffs and runs of the transitional cadenza. But the jazzy final section could have benefited from a bit more orchestral swing.

After intermission came the big event: the third performance of Fire in my mouth, Julia Wolfe’s massive, multimedia oratorio about the New York City 1911 Triangle Shirtwaist Factory fire, which killed 146 garment workers, many trapped by locked exit doors. Most of the victims were young female immigrants from Italy and Eastern Europe. Their deaths incited debate about labor, gender and immigrants’ rights and led to legislation that improved workplace conditions. The ambitious work is the centerpiece of a New York Philharmonic initiative – New York Stories: Threads of Our City – a project featuring an exhibition and a variety of concerts related to the fire and immigration. The subject matter of Wolfe’s demanding and passionate work is especially gripping as the US continues to suffer the effects of a government shutdown spurred by bitter debate over immigration policy.

The lavish, immersively effective production was performed by a percussion-heavy orchestra and 146 singers — exactly the number of people who died in the fire: three-dozen members of The Crossing – an excellent women’s choir (amplified on this occasion) dedicated to new music – and an equally impressive collective of 110 girls from the Young People’s Chorus of New York City. Throughout the singers moved around and about the stage and along the aisles as they sang and acted their carefully choreographed parts as the victims of the tragedy. The production also featured historic photographs and film footage, projected over the orchestra: powerful images of women dressed in shirtwaists clocking into factories, workers hunched over sewing machines in overcrowded rooms, the horrified faces of observers watching the factory in flames. 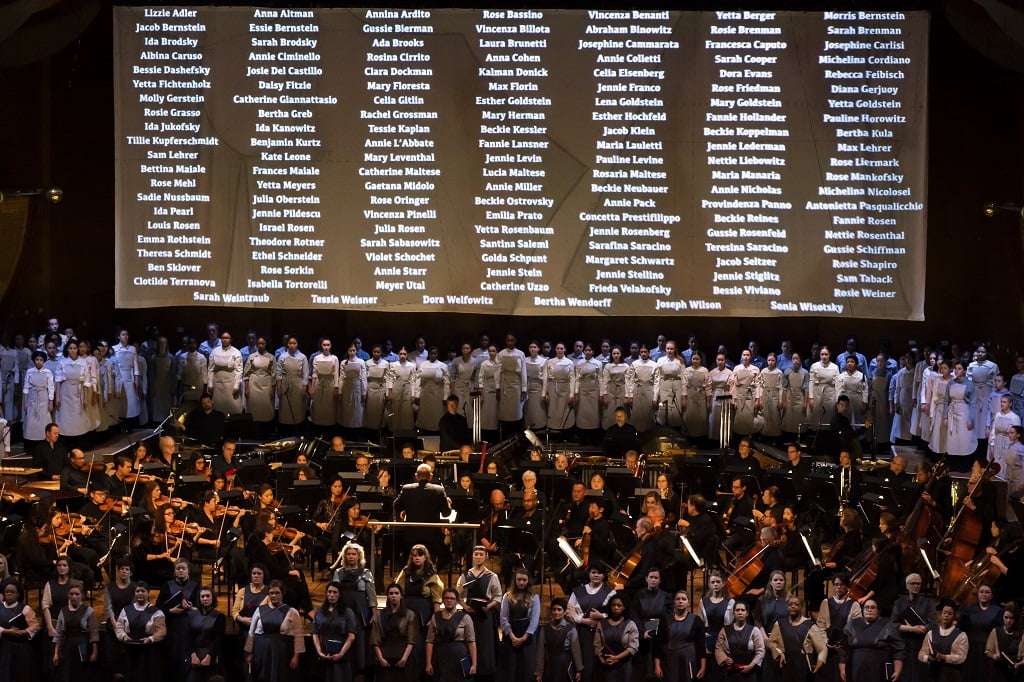 Fire in my mouth is a quote from garment worker and labor organizer Clara Lemlich, and it refers to her passion as an early advocate for workers’ rights. The tightly structured sixty-minute work is cast in four movements and employs a selection of texts chosen with great sensitivity. The first movement, ‘Immigration’, centers on an excerpt from an interview with a survivor, Mollie Wexler, who recalls the excitement and apprehension of the ocean journey from Europe to New York. The second, ‘Factory’, sets excerpts from lively Yiddish and Italian folksongs – music from the two most heavily represented ethnic communities – against the sounds of factory noise, including the swooshing sounds of scissors wielded by the members of The Crossing. ‘Protest’ uses the workers’ own words about their dreams of becoming American and their increasing awareness of unjust working conditions, and ‘Fire’ presents victims crying out in panic, a reporter offering an eyewitness account and, at the very end, a tenderly sung recitation of the names of all the victims.

The music is rife with propulsive sounds – fervently chanted texts of immigrants expressing their hopes, clattering strings evoking the sounds of sewing machines, layered voices reciting job titles (hem-stitcher, sleeve-setter, cuff-maker, and so on), and all those snipping scissors. Jaap van Zweden kept the many and disparate musical forces under his steady control and delivered a completely gripping and highly moving account of Wolfe’s rhythmically insistent and unflinching score.