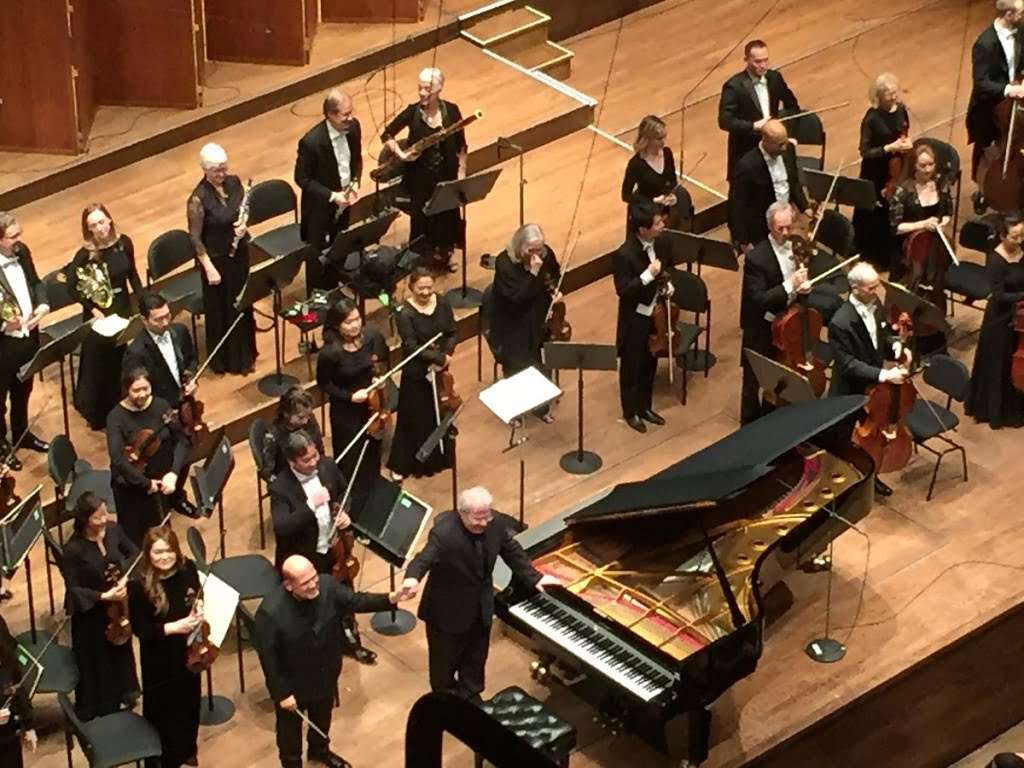 Mozart’s first and final numbered Symphonies provided ample indication of van Zweden’s stylistic orientation. His proclivity for imposing affected nuances and mannerisms in shaping phrases upon melodic material became evident from the outset. The principal theme of K16 is an arching phrase based upon a rising and falling triad in the home key, the top note of which is spun out in repeating eighths, all marked forte. Van Zweden embellished by adding a crescendo on the repeating B-flats that was awkward and distracting each time. On the positive side, van Zweden imbued the outer movements with much energy, the Philharmonic (with a substantial complement of strings) sounded bright and the playing vigorous. An air of mystery hovered over the slow middle movement, apparent mostly from underlining the short wave-like figures in the bass, a nocturnal scene for an opera, handled with impressively mature sensitivity for such a young lad.

Emanuel Ax was an excellent choice for Haydn’s ultimate Piano Concerto and made the contrapuntal complexity of the first movement effortless, gave a straightforward reading of the aria-like slow movement, and concluded with the ‘Rondo all’Ungarese’, which revels in sprightly Magyar dance tunes. Ax’s delivery was simplicity itself enhanced by his flawless technique. It was the highlight of the evening.

Stravinsky wrote Capriccio during the last years of the 1920s. The first of its three movements is a light, amusing Presto conjuring the atmosphere of darkly lit cabaret haunted by a stalking rhythm, while the Finale is permeated with the flavor of a Romanian restaurant during a bustling dinner hour. The opening outburst was rather harsh though spry and spicy, the first-movement’s buoyant, bouncy character recalling a casual stroll along a Parisian boulevard. With humor and tricky figuration brilliantly negotiated by Ax, he was bent on dissolving the misty atmosphere of the following movement. Then the caprice proper arrives with the Finale: devilishly playful and casual by turns, spiked with jaunty rhythms and bursting with effervescence, the music captivated with delightful joie de vivre. As an encore Ax provided an exquisitely shaped reading of Schumann’s ‘Des Abends’, the first of his Opus 12 Fantasiestücke.

Mozart’s ‘Jupiter’ Symphony found van Zweden even more emphatic than in K16. He micro-managed virtually every nuance; contrasts in dynamic levels were heavily underlined, but energy and exuberance abounded; and a tendency to exaggerate phrases with swells was so prominent as to become increasingly disturbing because of the frequency with which it was applied. Also overbearing was the conductor’s tendency to diminish phrase endings. Nevertheless, the Philharmonic sounded vibrant, inner voices were perfectly balanced, and playing was crisp, articulate and sprightly. Overall, the performance had more assets than debit. Adding the sprightly March in D (K335) as an encore was superfluous even if it provided a buoyant conclusion.