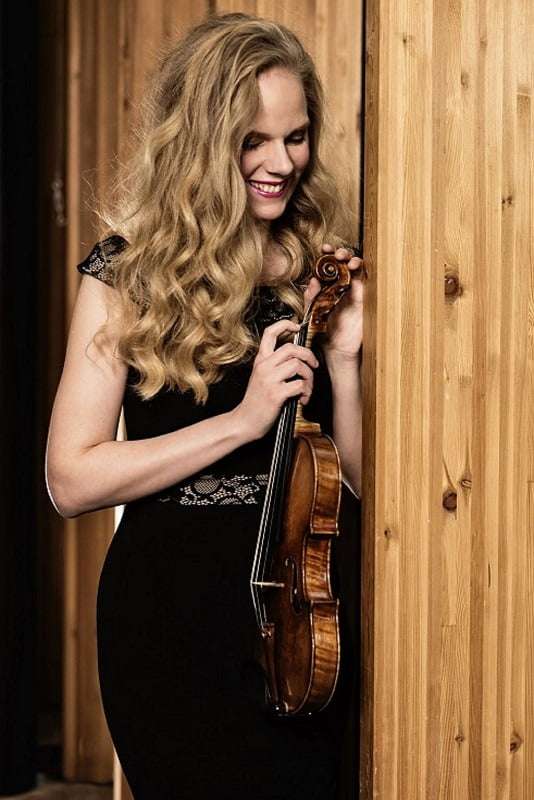 Jaap van Zweden’s coupling of Britten’s Violin Concerto and Shostakovich’s ‘Leningrad’ Symphony was a good conception, composers with much in common and well-acquainted, each holding fast to tonality to communicate reactions to contemporary times.

Britten completed his Violin Concerto (1939/50) just before the outbreak of World War Two. Its three movements are structured in traditional forms. Although the soloist is required to negotiate some rather difficult passages, the Concerto is less focused on showy technique than on expressing Britten’s pessimism. His anti-war stance had already been hardened by the Spanish Civil War, and he intended the dirge-like passacaglia Finale to pay homage to the brave British volunteers who fought against the fascists, and the preceding movement’s wild demonic character is embellished with dark tones of low brass. Simone Lamsma gave a stunning performance on her ‘Mlynarski’ Stradivarius, remarkable in both technical dexterity and expressive intensity. Lamsma offered a spectacular encore, the Finale from Hindemith’s Sonata, Opus 11/6.

The influence of War is even more apparent in the Shostakovich, completed in 1941. Although not written in the named city during its Nazi siege, the first movement depicts with graphic realism the approach of enemy troops with a repetitive march until it reaches an overwhelming climax. Through broadcasts, the Seventh became a symbol for victory that uplifted the Allies in their darkest hour and catapulted the composer to international fame.

Van Zweden set a brisk pace throughout that sometimes enhanced and at other times detracted from the character of each movement. The first subject of the opening movement, which expresses the simple contentment of a pacific people, was unduly vigorous, even brusque, and the long build-up of the march was steadily paced but lacked sufficient tension, its climax sounding merely loud. The second movement, an elegiac/nostalgic Scherzo, also suffered from van Zweden’s slightly pressed tempo, sounding strangely distraught. However, the intrusion of a motif with overtones of the ‘Dies irae’ on E-flat clarinet, brilliantly played by Pascual Martínez Forteza, had an appropriately demonic character.

In the Adagio van Zweden’s forward-moving tempo restricted Shostakovich portraying his city enveloped in misty twilight, sounding edgy and rather mundane. Only the violas’ soft statement of the main idea toward the end avoided the all-too-pervasive pressure that van Zweden forced on this music. The Finale, however, had just the right amount of energy and vitality, coming out of despair and into the sunlight of hope with unrelenting fervor. The conclusion forcefully drove home a warning to oppressors: “Tremble ye tyrants!”. The New York Philharmonic played superbly.