Opening night of the New York Philharmonic’s 2010-2011 season was both highly anticipated and substantially successful, owing primarily to Wynton Marsalis’s Swing Symphony, co-commissioned by the NYP with the Berlin Philharmonic, the Los Angeles Philharmonic and the Barbican Centre in London. First on the program, this 40-minute work was the highlight of the evening and deservedly so. Swing Symphony combines a wide variety of jazz idioms characterized under the generic category of ‘swing’ through the media of symphony and jazz orchestras. Its subtitled five movements virtually summarize the history of swing from ragtime to bebop. Unlike previous attempts to create symphonic works based upon jazz music, Marsalis doesn’t merely string together segments devoted to different-era styles, using the symphony orchestra as either harmonic accompaniment or in melodic dialogue with a jazz ensemble; rather he integrates symphonic and jazz idioms deftly and intelligently. The combination of such ensembles produced such a large body of musicians as to leave little room for Alan Gilbert to weave his way through the string section on the way to the podium. From the opening downbeat, three things became increasingly clear: Gilbert is very much at home with this idiom; all performers gave all that they had to make the work a success; and everyone thoroughly enjoyed the experience, notwithstanding the symphony’s numerous difficulties (resulting from complex polyphony and metric variety, as well as textural density).

After the percussion and low brass establish a strong march rhythm, the first movement, entitled ‘St. Louis to New Orleans’, really gets under way with a statement of the symphony’s principal melodic elements. From this fragmentary material a syncopated march in ragtime is fashioned and developed in various jazz idioms. The second movement, ‘All-American Pep’, features more sophisticated styles developed through various media, such as radio, recordings, television and motion pictures. Here tenor sax and trombone solos, respectively recall Coleman Hawkins and the famous trombone duo of Kai Winding and J.J. Johnson. Symphonic woodwinds add refinement. A romantic baritone sax solo harkens back the good old days of the radio broadcasts from a starlit rooftop ballroom. ‘Kansas City Swing’, the third movement, revisits the theme that began the symphony and features a lyrical tenor sax riff, barnyard sounds of muted brass graced with lush strings, and expressive cello passages, ending with a delightfully gay conga at the height of which the musicians simply cannot restrain the temptation to shout for joy. Although elements of this music are undoubtedly familiar to those who fondly recall the days when “swing was king”, by no means is this music a pastiche. Marsalis brilliantly integrates stylistic elements, from nocturnal romantic lyricism to thumping dance rhythms, by utilizing an intelligent combination of instrumental groupings, either independently or in combination. As the conga plays itself out, the music quiets down on muted brass and percussion until it fades away completely. 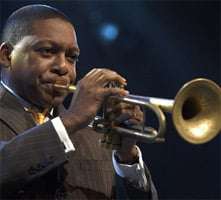 Bebop is featured in the up-tempo fourth movement, ‘Manhattan to L.A.’. Here Marsalis took the lead trumpet solo, reminding us of his skill and artistry. A mambo intercedes, giving the percussion section another opportunity to provide the rhythmic foundation for various solos and orchestral passages. An alto sax solo throbs with sensuality, as the music closes with a hazy nocturnal glow. African rhythms drive the opening section of the finale. Its title, ‘The Low Down Up On High’, relates to the African-American gospel music, and summarizes the entire work. As Marsalis aptly puts it, the closing moment “gently proclaims that inextinguishable human spirit which even in death, will not be denied.” Swing Symphony is a remarkable achievement that makes intelligent use of divergent ensembles while integrating an impressive array of jazz styles with aplomb and sophistication and always keeps the listener engaged.

The second half of the concert was less impressive. I had the impression that the Philharmonic gave itself so unreservedly to the Marsalis that the musicians had little left to apply. Tempos in Don Juan were generally within traditional bounds, but the brass was reserved and trumpets sounded rather raspy at times. The inclusion of this well-worn tone-poem may have been a nod to ‘opening-night’, that apparently is expected to include at least one popular work. But that is not a sufficient reason for playing it with anything less than full commitment. Gilbert tried to imbue lyrical passages with a sense of line, yet what resulted was less than satisfying. Maybe familiarity is the problem, not that it breeds contempt but that it sometimes causes an orchestra to settle for what may be generally acceptable though hardly inspiring.

Hindemith’s Symphonic Metamorphosis on Themes of Carl Maria von Weber was premiered by the NYP on 20 January 1944 under Artur Rodzinski, yet has not performed the work for more than fifteen years. This had more committed playing, so the swagger and jocularity of the opening movement came through; but, except for a sprightly rendition of the second theme, played almost like an Ozark hoedown by the oboes, the remainder made little impression. The ‘Turandot’ movement was more impressive, from its finely wrought opening flute solo graced by chimes, through the gradual build-up of the Chinese ostinato theme to a brass and percussion explosion. The gray coloration of the Andantino seemed to put a damper on its quiet lyricism which lacked any particular stylistic flavoring. Although the march-like movement that concludes the work, with its direct quote of a theme from Mahler’s Sixth Symphony, was set at an appropriate pace, again a modicum of commitment was lacking, notwithstanding the energetic, closing measures.