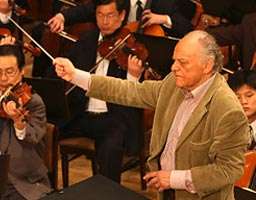 This New York Philharmonic concert offered an eclectic and enjoyable programme of eighteenth- and twentieth-century music that lacked any internal thematic links. Lorin Maazel, in his final season as the orchestra’s music director, continued his traversal of J. S. Bach’s Brandenburg Concertos and also led concertos by Prokofiev and Mozart with pianist Leon Fleisher and Philip Myers, the orchestra’s principal horn, as the respective soloists.

When a Bach Brandenburg concerto appears on a symphony orchestra programme, one hardly knows what to expect. Fortunately, my dread of huge string sections belting out the Third Brandenburg (think of Beethoven’s Grosse Fuge) turned to eager anticipation when observed a nearly empty stage, set with only a harpsichord, three chairs, a high stool, and a half-dozen music-stands. My now-positive expectations were completely fulfilled as Maazel and eleven superb instrumentalists gave a stirring performance very much in the Baroque spirit and free of any intrusive romanticism. With a single instrument playing each part, every melodic and harmonic voice stood out with its own clear identity.

Sheryl Staples, the Philharmonic’s principal associate concertmaster, was stellar at first violin, with Marc Ginsberg and Lisa Kim, principal and associate principal respectively of the Philharmonic’s second violin group, ably taking on the other violin parts. The three violas – principal Cynthia Phelps, associate principal Rebecca Young and Robert Rinehart – produced a rich sound that complemented the violins perfectly, with Phelps contributing fine solo work in the concluding movement. Associate principal Eileen Moon and her colleagues Sumire Kudo and Maria Kitsopoulos played solidly in the less flashy cello parts, and the basso continuo was excellently provided by principal double bass Eugene Levinson and harpsichordist Lionel Party. Following the first movement, Party played a showy improvisatory passage from which Maazel carried off the strings’ segue into the two Adagio chords in Bach’s score with graceful subtlety, and then led the ensemble in a briskly (but not recklessly) paced drive to the finish. 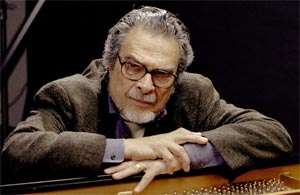 A performance by Leon Fleisher is always a welcome event, and this was no exception to the rule. In a throwback to the years in which he was limited to playing with his left-hand alone, Fleisher played the rarely performed Fourth Piano Concerto of Sergei Prokofiev. This is one of the many works for piano left-hand commissioned by the Viennese pianist Paul Wittgenstein (1887-1961), who lost his right arm in combat in the First World War, including compositions by such composers as Ravel, Richard Strauss, Korngold, Hindemith and Britten. Wittgenstein refused to play the Prokofiev, however, asserting that he did not understand it, and the work went unperformed until 1956, a full quarter-century after it was completed and three years after the composer’s death.

Although hardly one of Prokofiev’s greatest works, the Fourth Piano Concerto brims with the composer’s characteristic wit and is a technical showpiece of the pianist’s dexterity (or, perhaps more accurately, his sinisterity). Right from the outset, Prokofiev sends the left-hand from one end of the keyboard to another, sometimes in leaping arpeggios and at other times in extended scales, requiring rapid-fire playing throughout the Vivace movements that begin and end the concerto. Fleisher was up to the challenges, demonstrating incredible agility in the outer movements and bringing his impeccable musicianship to bear in the more complex middle ones.

The second movement Andante, the work’s longest movement, featured fine contributions from the orchestra, beginning with a soft theme on the strings to which clarinet and bassoon solos added dark colours. The piano entered with a slow, leaping passage that led to a short piano solo and then wide-ranging arpeggios as the strings returned. The middle portion of this movement featured a lovely passage for horn and strings, a solo for first violin, and then solos for trumpet and flute as the strings played forcefully to the accompaniment of strong piano chords, scales, arpeggios and trills. The latter part of the movement is made of gentler stuff, with the piano softly trilling much of the way to the concluding passage featuring flute and strings. Fleisher and Maazel kept piano and orchestra in fine balance, maintaining the movement’s romantic and sometimes pensive moods.

The Moderato third movement, in something close to sonata form, marked a distinct change in timbres and rhythms from the rest of the concerto. It opens with a trumpet solo and strong, dissonant string chords, with the pianist playing rolling figures that continue to pervade the entire movement. The interplay between Fleisher and the orchestra was fascinating, with punctuation from trumpet, flute, and especially the bass drum as the piano line underwent almost constant shifts of tempo, rhythm and thematic material, leading to an exciting finish. In the closing Vivace, virtually a shorter, softer reiteration of the opening movement, Fleisher’s rapid, non-stop playing soon brought the concerto to its surprising ending with playing softly at the extreme right end of the keyboard.

After the interval came Mozart’s Horn Concerto No.2. Here Maazel held the orchestra back too much, allowing Philip Myers’s horn to overpower the ensemble, particularly in the Andante. This made the movement seem less nimble and delicate than a better balance would have achieved. Also, Myers’s generally clear and well-rounded tone escaped him briefly at the somewhat raspy outset of the finale, although he returned to top form once a rest enabled him to drain his instrument sufficiently. The remainder of the movement was a delightful romp, with Mozart’s cleverly interpolated hesitations adding an amusing touch as the concerto came to an end.

Maazel concluded the programme with excerpts from Manuel de Falla’s El amor brujo (Love, the magician). A bit over ten minutes in duration and played without pauses between the selections, this selection was rife with the brilliant orchestral colours and typical Spanish rhythms for which Falla is best known. It seemed to arrive in little more than the twinkling of an Iberian eye at its most famous music, the ‘Ritual Fire Dance’, which provided a delightfully upbeat fillip to end the evening.